Johnn and the Horses 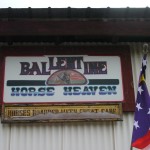 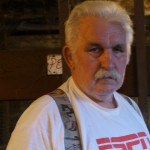 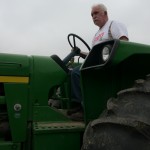 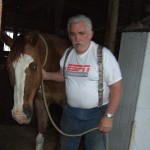 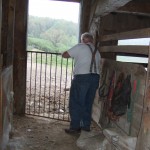 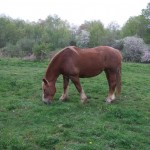 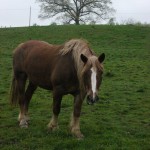 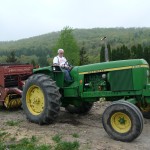 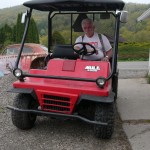 Johnn and Connie own Ballentine’s Horse Heaven on Murry Street in Athens Township in Pennsylvania. The stable is nestled in the Endless Mountains not far from Roundtop Park. It is rare that I don’t see Johnn when I go up to the stables to ride Pepper or CJ. He is always taking care of the barn, mending fences, tinkering with the well’s pump, cutting wood or working on a piece of equipment in his machine shop.

On Friday, he had his John Deere tractor and baler out in the yard. Johnn was getting ready to cut hay when the grass grows tall enough. Every year he cuts and bales hay from their field to feed the horses throughout the seasons. Some of the twine on the baler needed to be replaced and the tire on his tractor was ripped. He’ll need to use a front-end loader to get the bales from the field into the barn but once in the barn they can be rolled into place.

Everyday Johnn cares for the horses. He brings them in from the pasture and puts the horses out for the day. He fills the racks with hay, makes sure the horse’s stalls are clean with new bedding, their pails are filled with water, and that the right kind of grain is given to each horse. He knows which horse is ailing and what medicine it gets. He holds the horse when the ferrier or vet comes. We riders come a couple times a week but Johnn is there every day no matter how much snow, rain or sweltering heat.The horses know Johnn; trust and depend on him. If Johnn calls the herd they come running from the farthest sections of the pasture.

Johnn’s first horse was Champ, a Belgium draft horse, which came from a farm near the Canadian border in New York State. Champ was trained to haul logs out of the forest. The father and son team that owned Champ cut timber deep in the woods where a truck couldn’t go. The horse waited to have the log hitched then went through the woods by himself to the truck where the log was unhitched and loaded. Champ worked between the two men all day until the job was done.

Johnn had Champ for eight years then one day the horse couldn’t get up. It was winter and there was ice. Johnn took the tractor out to the pasture hitched a rope to the Champ and helped him get to his feet. But it wasn’t long before no matter what Johnn did Champ just couldn’t get up. The vet said it was time to put Champ down which they did in February 1995. Champ was 20 years old when he died.

A few months passed and spring came. Johnn and Connie went down to Ulster, Pa to look over the horses owned by Mr. Cole. They saw a one year old filly in the pasture with a lot of other horses. Johnn picked out the yearling from all the other Belgiums in the field. He loved the sorrel filly’s caramel color and named her Myrtle.

When Myrtle was four years old Johnn sent her to school at the home of an Amish farmer in Leraysville, PA. A few weeks later Connie and Johnn had to call in the vet for Myrtle because she had shipping fever. Shipping fever is inflammation and fluid build up in the lungs. It is common when horses are transported for long distances. The vet gave Myrtle a shot for the fever and a few days later Myrtle was fine. The farmer hitched Myrtle up with his 3 mules and trained her to pull a wagon and bale hay.

At the end of summer, Myrtle graduated from her schooling with the Amish farmer. Johnn hitched an arena drag to her harness and off they went to smooth and level the arena. She was so well trained that all he had to do was walk behind her holding the reins. She knew what to do. Then there came a time when the arena wasn’t being used, the grass began to grow, and Myrtle didn’t drag the arena any longer. Now Myrtle spents most of her time between the barn and pasture.

Johnn has plans to put Myrtle back to work this summer; hauling logs from deep in the woods. He has two harnesses ready; a nylon and leather one he purchased and another Connie had the good fortune to find at a garage sale. The man who sold Connie the harness had bought it at an auction for a friend who never came for it. All he wanted was the price paid for the harness which was a good deal. Johnn needs to adjust the harnesses and learn how to work Myrtle with the logs. A man who logs with draft horses is coming to give Johnn a hand with Mrytle to get them started.

Johnn said,”You just knew that the old farmer must have worked a lot with Dewy. They were a team; horse and man working together in sync. Something you don’t see very often.”