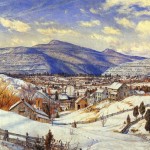 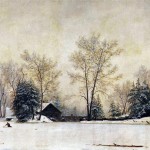 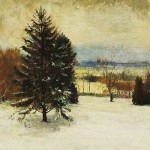 Since my last article the Valley area received a little less than a foot of snow accompanied by high winds brought to us by winter storm Nemo. Most of Nemo’s snow was dumped on coastal Northeast, but Round Top Mountain did get a nice covering of the white stuff. Then a few days later came rain and warmer temperatures resulting in most of the snow melting except small amounts clinging to fields, hidden under trees or in the higher elevations on the northwest ridge of Round Top. Along with the rain came high winds, then the thermometer suddenly dipped into the teen’s and everything froze. Needless to say, this type of weather makes riding problematic. I enjoy riding in snow but not so much freezing rain and 20 mile an hour winds. Thus I turned to writing poetry. The following is a poem inspired by my observations while riding on Round Top Mountain. Hope you enjoy the poem.

‘Twas early morning in pale pink light
When a hunter began his weekly hike,
With a long rifle heavy and cold
To a mountain draped in soft white snow,

He paused near a fox’s burrow,
His orange vest mirrored the dawn,
The loyal black lab lagged behind
Tracking vermin in velvety white snow,

At the hilltop near an old home site
The man inspected the rifle’s gun-sight,
Blackjack lifted his muzzle toward the sun
As the man cradled the long cold gun,

Rapidly from deep in the pasture,
Came the rumble of flying hooves;
As horses charged towards the fence,
Dashing swiftly o’er fresh white snow,

The dog howled a strong protest
And the horses stopped dead cold,
All retreated except one,
Standing defiant in pitiful white snow,

The horse snorted and stomped
While the dog barked a ravenous response,
The man scoped the animal within his sights
For a standoff in deadly white snow,

The huge black horse, a real hellfire,
Advanced dangerously towards the barbwire,
The creature snored, nostrils flared
As the horse issued a boldfaced dare,

The man and the dog stood their ground,
The horse looked warily at the hound,
Then spun in midair and galloped off,
Dancing and prancing o’er joyous white snow,

The hunter firmly held onto his dog
As the animal whimpered and whined,
Slowly they turned towards an old cornrow,
And left the horses in soft white snow.

This entry was posted in Uncategorized and tagged poem about hunters and horses, winter riding conditions, winter storm Nemo. Bookmark the permalink.