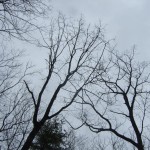 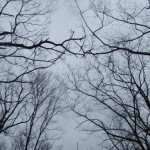 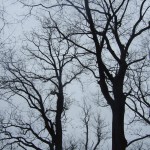 Frigid temperatures faded gradually blending into cool March weather. The sky filled with white puffy clouds, moving rapidly across the sky and casting shadows on the ground. Instead of wearing my winter outfit, I pulled on a sweatshirt and headed for Horse Heaven. All winter the horses stood near the barn door waiting to go in, but today they were on the hillside trotting and galloping. They held their heads high as their manes flew in the wind. The herd stopped, snorted and suddenly broke into a canter. The horses had spring fever.

I walked down the hill, put a halter on Pepper, returned to the barn and saddled up. Pepper whinnied for the herd as soon as we trotted away from the pasture. She tensed every muscle with excited as we headed for the park. Her hooves tapped on the dirt road and when we reached the hilltop, I heard the wind roar. The wind rushed up the road streaming over the ridge screaming like a steam engine ready to take off. As we crested one hilltop and rode down the other side, we heard another wind bellowing across the opposite side of the mountain. The two winds blended in a strange opera of shrill howling noise.

The wind obliterated every other sound. Nervous and anxious, Pepper gathered energy, every step higher and faster. Several times I turned in the saddle and looked back up the road mistaking the wind for a car or truck. With the airstream at our backs everything became calm; I heard the wind but didn’t’ feel it. However, when the road turned and headed towards the wind I felt the warm breeze rush over us and my pulse quickened.

The warm weather during the last few weeks melted the ice and snow resulting in water running off the mountain and filling the ditches alongside the road. Small slender waterfalls cut into the muddy hillside. Sunlight sparkled on the cascading water. The bubbling, gurgling liquid mixed with the sounds created by the wind. The ditches swelled with fast moving water headed towards the Susquehanna River.

We turned up the road leading to the park entrance and everything changed. The trees groaned and swayed like gruesome misshapen skeletons. The sky darkened as the wind gathered the clouds and bunched them together. Deep shadows danced in the woods and crisscrossed the gravel road. Leafless branches clanked against one another and dead brittle twigs broke off and fell to the ground. On a trail deep in the woods two young men laughed. Their voices, clear and eerie, floated on the wind. I heard the squeal of their four-wheeler’s tires spinning; stuck in the mud.

Pepper became nervous but walked up the road and around the gate until we reached the pond. Small choppy waves ripped across the water’s surface. I glanced at the treetops bending and creaking. Gently, I squeezed the reins for Pepper to stop. We turned around. It was too windy to ride any further. She practically jumped for joy as we headed back down the road. The weird noises in the park were left behind and we cantered towards the barn.

One Response to Riding the Wind