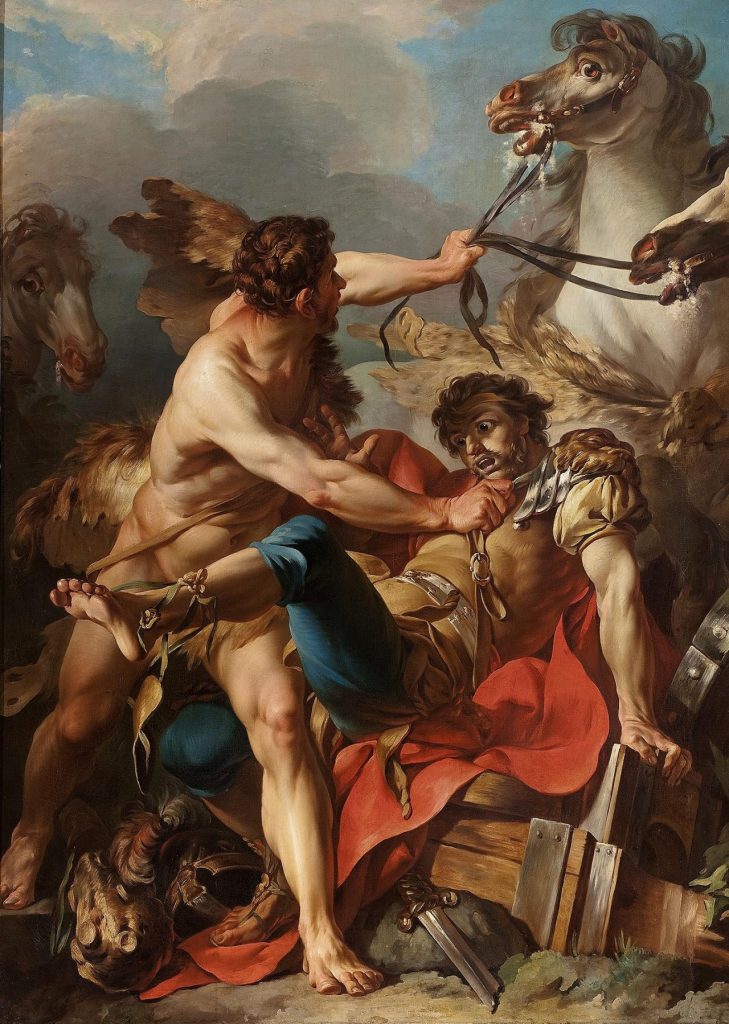 The story of the Mares of Diomedes is part of a much larger Greek myth; the legend of Hercules. As with many myths there are different versions; so if this version isn’t the one you know and you would like to share; please leave a comment.

Hercules was the son of the Greek god Zeus, and Alcmene, a mere mortal. This made Hercules a demigod; half god and half human. At the same time Zeus conceived Hercules, Amphilryon, Alcmere’s husband, impregnated his wife with a son, Iphicles. Thus heteropaternal superfecundation twins were born to Alcmere; each conceived by different fathers.

It seems Zeus had a habit of producing children with mortal women by using trickery. Zeus’s wife and queen of the gods, Hera, became angry and revengeful because of Zeus’s adultery. She developed a hatred for the resulting off-spring of his philandering behavior. Hercules specifically came to know her wraith.

Zeus declared that the soon to be born, Hercules, would become the ruler of the Mycenaean kingdom. Nevertheless, Hera, in a rage prevented this from occurring and instead another baby boy, Eurystheus, became ruler of Mycenaea. Still not satisfied, Hera plotted to kill baby Hercules by sending two deadly snakes to do the job; however, Hercules possessed tremendous strength and strangled the huge reptiles. This did not stop Hera, she continued to plot against Hercules.

The baby grew into a dynamic and courageous man. Hercules married King Creon’s daughter, Megara. The newlyweds began a family and had three sons. Hera, ever plotting against Hercules, drove him insane and he killed his family. When the madness faded, Hercules realized what he had done; he became overwhelmed by grief and suicidal. He decided to travel to the Oracle of Delphi and find a way to atone for his sins.

Located on Mt. Parnassus, Delphi was a religious sanctuary dedicated to the Greek god Apollo and home to the Oracle of Delphi, Pythia. After Pythia heard Hercules’s account of what happened, she fell into deep meditation. Afterwards, she told him to go to the city of Tiryns and follow the commands of his cousin, King Eurystheus. If he would do this he would no longer feel guilty for killing his family.

The king ordered Hercules to complete twelve tasks which became known as the Twelve Labors of Hercules. King Eurystheus had no great love for Hercules and wanted him to fail. Each task the king made harder than the previous. The eighth labor he gave to Hercules was to capture the man-eating mares owned by King Diomedes, leader of the warlike tribe of Bistones. The mares were named Podargos (swift), Lampon (shining), Xanthos (yellow) and Deinos (terrible).

King Diomedes did not like strangers or wanders in his kingdom. He devised a way to rid himself of unwanted visitors by tearing them apart and feeding them to his horses limb by limb. Due to their immense strength, the mares were kept chained to bronze feeding-troughs. Their diet, being unnatural, caused them to be vicious and uncontrollable; fire radiated from their nostrils.

Hercules sailed with a group of young volunteers across the Aegean Sea to Thrace on the shores of the Black Sea in search of King Diomedes. He and his companions entered the king’s stables, overpowered the guards and stole the horses. They made their way toward the sea; however, King Diomedes realized what had happened and set out after Hercules. As Diomedes’ soldiers grew closer, Hercules turned to fight; leaving the horses in the care of young Abderus.

Unfortunately, the horses bolted dragging the young man after them. By the time Hercules defeated King Diomedes and returned; his friend had been eaten by the mares. In a rage, he cut the dead king’s body into pieces and feed it to the horses. After the horses ate the king’s corpse, they became calm and docile. Hercules roped the horses’ mouths shut, loaded them on his ship and set sail for Mycenaea.

Hercules brought the mares to King Eurystheus thus completing his eighth labor. The king dedicated the horses to Queen Hera. It’s unclear where the horses ended up; some say they became permanently calm and were released to roam Argos. Another version states that the mares were taken to Mt. Olympus where they were freed and eventually eaten by wild beasts.

*Note – to compile this story I combined information from several different versions of the myth. If you are interested in the actual (sometimes conflicting) myths follow the sources I have listed below.