How to Convert a Standard Breast Collar into a Pulling Collar 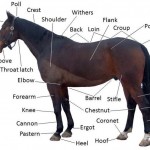 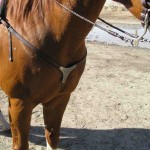 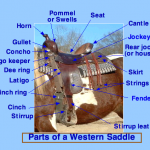 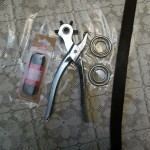 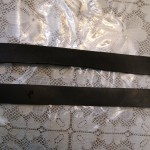 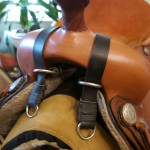 Until a few weeks ago, I had never heard of a pulling collar. While searching YouTube videos, I stumbled upon the ‘Functional Horse Man’ explaining how a pulling collar worked. Wow, that made total sense! I have a standard breast collar which crossed CJ’s shoulder muscles and attached to the saddle’s front rigging rings. I often found sweat marks where the breast collar rubbed against the horse’s shoulder blades after a long ride. Even though CJ didn’t seem to mind it, I thought it looked uncomfortable.

I checked into some on-line stores and found that pulling collars are a little pricey, a bit more than a standard one; however, I already had a breast collar. I did some more searching and stumbled across a comment by Smrobs on horseforum.com. She explained how she fashioned an old pair of reins into straps which when fitted to her saddle’s swell and gullet converted her standard breast collar into a pulling collar. What a great idea!

Unfortunately, I didn’t have a set of old reins, but I did have an old leather belt which would work. Lucky for me, the belt had two large dee rings. All I needed was a smaller dee to slip through the bigger one. That didn’t seem too hard. I went to Tractor Supply, but found their rings were too big, too expensive and they didn’t carry dee rings. I drove over to True Value and also didn’t see any dee rings, but found some machine washers which I thought would work. However, I decided against purchasing them after talking to the man in the hardware section. He explained that the flat machine washers would cut into the leather overtime, but a round, solid metal ring would not. The round rings were 0.75 cents each. Now all I needed were some 72” leather shoelaces which I purchased at WalMart for $4.00.

I drove to the stables and made some measurements. Before I cut the belt I wanted to make sure that the strap would be the right length. Once I determined the correct length, I cut the belt and looped each end around a ring. I used a small ring at one end and a large one at the other. I cut each shoelace in half and punched holes in the belt near the rings. Then, I threaded the shoe leather through the holes and wound the remaining shoelace around the belt. I ended up with two leather straps with metal rings at both end.

I went back to the stables, saddled CJ, and pulled the straps around the saddle’s swell and through the gullet. Then, I feed the smaller ring through the larger and attached my breast collar making sure it wasn’t too tight. Not only did it look more comfortable for CJ, it looked good too. I don’t think anyone would notice that the straps were homemade. I took a ride through the park and my adaptation worked great. The straps might not be the best for high performance riders and cowboys, but for the simple trail rider it worked pretty well.

One word of caution; make sure that the rings and leather are strong enough for the job. If you decide to use an old belt like I did make sure the belt is real leather and thick enough to be used on a horse. The same is true of the rings. The last thing you want is for the strap to break, so like all equipment, check it before you saddle up. Also, if you can’t find a piece of leather to use ask your saddle repairman or shoe repairman. They might have a piece of leather that will work and can sew the ends for you.

Thanks to Smrobs and the Functional Horse Man for a great idea.