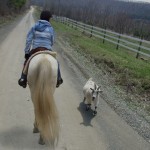 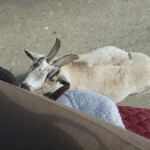 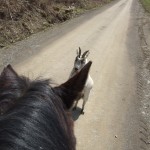 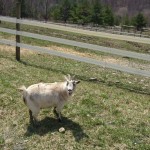 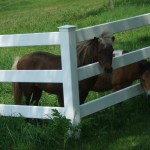 Marilyn and I first saw the miniature goat last fall when the trees were ablaze with color. On our way back to the barn, we rode down Weaver Road past the Slocum farm. A small fat goat with long horns stood in a pasture near two Shetland ponies. As soon as the creature saw us it bleated a few times and headed for the fence.

“I don’t think that fence is going to hold it,” Marilyn said.

And she was right; the goat ducked under the fence and headed straight for us falling in line next to Sam. The little goat walked with great self-assurance, as if she was supposed to be going wherever we were going. The last time CJ encountered goats, he tried to run away, but this time he didn’t seem to mind the goat, settled down and cautiously followed along behind Sam. Even when the goat stepped too close to the horse and Sam kicked; the goat took it in stride and didn’t miss a beat. The little goat just kept marching alongside Sam. After we had traveled a little bit down the road Marilyn stopped.

“I think the goat is going to follow us all the way back to the barn. Why don’t we turn back towards the goat’s pasture? Maybe if we walk up the driveway she will head back home?” she said.

We turned the horses around and walked up the gravel driveway headed for the barn and the goat’s pasture. Sure enough, the goat scurried under the fence and trotted back to her pony friends. We quickly changed direction, taking the opportunity to trot away before the goat could change her mind.

A few weeks later my daughter, Emma, and I rode down Weaver Road near the Slocum farm. A middle-aged woman and the goat stood near a white mailbox next to the road, and we stopped to say hello. Cassandra owned the goat named Roxy, and told us the animal used to live next door. However, the goat’s owners were going through a turbulent divorce and couldn’t keep her any longer. Roxy bleated and peeked out from behind Cassandra as she talked. Roxy certainly had a lot of character.

Wintry weather brought snow, sleet and ice. All season long the goat was out of sight, but in early April I again saw Roxy in her pasture with the ponies. The goat saw Pepper and me as we walked down the road towards home. The two ponies watched Roxy made a beeline for the fence. Pepper stopped. She wanted to get back to the barn but the goat blocked her way. The horse stared at the goat hurrying towards us. Pepper arched her neck and snorted. With some encouragement, we walked a little way down the road, and Roxy trotted alongside as if she were out for an afternoon adventure. I stopped to take a picture, and the goat became upset, bleated and stuck out her tongue. Pepper didn’t seem to mind the goat following, however, Roxy needed to go home.

I turned Pepper around to face the goat, hoping that Roxy would also turn around and go back to her pasture. The goat didn’t care for Pepper confronting her, reared up and stood on her back feet. Quickly, I spun the horse around avoiding a confrontation between Pepper and the goat. Roxy continued to follow behind Pepper, but the warm afternoon began to tire the goat. When I turned up the Slocum driveway Roxy gave up the chase and returned to her pasture. Quickly, Pepper and I circled towards home and cantered away.

Curious about the relationship between horses and goats, I searched the web for information. From what I read, it seems that goats and horses can get along – not always. Some racehorses have a goat for a companion on their travels from track to track. Whatever the case, Roxy obviously enjoys the company of horses and horses don’t seem to mind her too much.