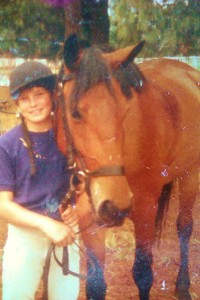 Hannah Hooton lives in the UK and since I live in the USA it’s understandable that we have never met. However, with the internet long distances are bridged. Hannah gregariously answered my questions about her involvement with horses and supplied the photos for this article.

“From what I read, you grew up in Zimbabwe. The Retzlaffs rescued over a hundred horses in 2002 when Mugabe brutally evicted white farmers from their farms. Did you know the Retzlaffs?”

“Unfortunately I didn’t ever know Pat and Mandy Retzlaff personally but as is so often the case in horsey circles they are friends of friends and I’ve immense admiration for what they did. I left Zimbabwe the same year as them and set up a new home in UK, and that was tough enough, so I can only imagine what the Retzlaffs went through moving over a hundred rescue horses to a new country which had been in a state of civil war for as long as I’ve been around. Truly courageous.” 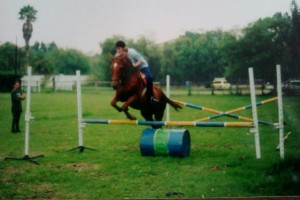 I asked Hannah many more questions about her horses and where she rode. Here is what I found out.

At six years old, Hannah rode her first pony. She received her first horse, Cassy, at age 10. The Standardbred mare proved very fast at a trot but usually that was all she did – trot extremely fast. Fortunately, when competing in the gymkhanas trotting race this problem became an asset and the duo won. However, the horse’s reliance on the trot proved a bit problematic when Cassy approached a jump at a canter. If she became doubtful of making the jump, Cassy broke into a trot; although it was only her gait that changed. Cassy still traveled at the same speed.

A few years went by and Cassy decided it was time to jump out of her stable. More than once she crossed paddocks, jumped over gates and a five foot fence to arrive at her destination; a local stallion named MacGyver. The visits resulted in a surprise for Hannah.

One morning, Hannah arrived at the stables and Cassy greeted her with a loud whinnie, head over the stall gate, ears pricked forward and with a toss of her head the horse gestured to the inside of her stall. There a small colt stood next to his proud mother. Hannah named the foal Martini, Marty for short.

Hannah’s family fell into financial difficulties and Cassy and Martini were sold. The location of the horses and their new owners was kept from the young girl. However at a horse show, soon after the sale, Hannah bumped into the girls who purchased Cassy. One of the girls showed her a massive bruise on her thigh where the horse had kicked her. This surprised Hannah as Cassy had never done anything like that when she owned her. Then Cassy slipped away into the unknown. Hannah never saw Cassy or Martini again, although several times she attempted to trace the whereabouts of the horses. Once she heard a rumor about Martini’s new owner but when she wrote to them they replied that she was mistaken.

Although Hannah’s horses were gone, she still rode at the local riding school. Two horses became her favorites; Ducati and Casey. Ducati, an off track Thoroughbred, had won at the track and retired to be a broodmare but unable to foal became a riding school horse. Casey, a bay Arab gelding, became Hannah’s exclusive ride. She helped the gelding discover the love of jumping and together they had great fun. Hannah was devastated when the riding school sold the little Arab as part of a job lot destined for Zambia.

Many years later while watching an annual pony show in Harare, Zimbabwe, Hannah spotted Casey among the numerous horses warming up for jumping classes. She approached the groom holding the horse, held out her hand and patted the old pony. In her heart Hannah knew this pony was Casey even though the groom called the little Arab by another name.

A few minutes later the pony’s rider came and divulged that the Arab had originally been called Casey. She didn’t know anything about the pony’s history having rescued the animal from mistreatment at the hand of a veterinarian in Zambia. The young rider nursed the little horse back to health and the two were now competing at shows.

Casey watched as Hannah told the woman about his history. The pony stood at hand, grey distorting the once distinct star on his forehead and speckling his muzzle and temples. She left the aging pony, sad he had suffered so much but happy that at last he had found an owner who loved him. 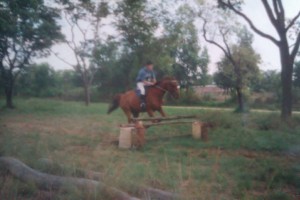 Hannah lived on a farm a couple of hours outside Harare. The farm Hannah lived on had several farm labor families. The kids from these families developed a good relationship with Hannah. They helped her lug poles and barrels around the arena in exchange for English lessons and occasional rides on Tomahawk. When Hannah broke her collarbone she lost the use of her arm; mucking out stalls became a nightmare. The farm kids were incredibly kind to her and helped out with her chores. It wasn’t long before Tomahawk found a new owner. The ex-racehorse was sold shortly before Hannah and her parents were forced off their farm in 2002.

Hannah found herself living in the UK. She spent a year working with horses in Australia. Part II of this blog will be about Hannah’s experience in Australia. Until then, Happy Trails to all my readers.