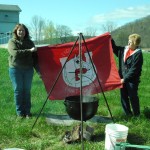 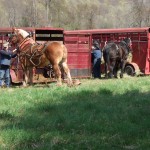 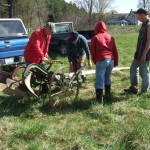 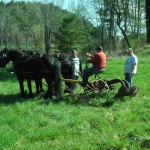 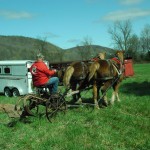 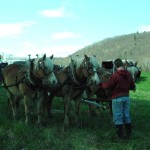 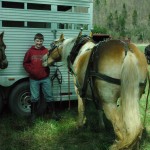 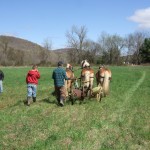 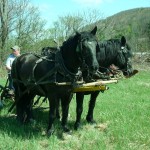 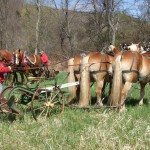 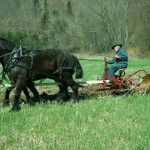 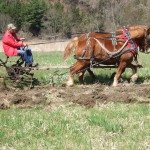 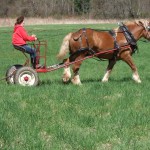 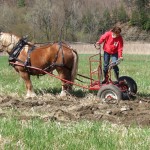 It was early in the day when I drove up route 34 to see draft horses plowing a field just outside Lockwood, NY. The Endless Mountains Draft Horse Club host Plow Days every year in the spring. The club is made up of people who own draft horses and people who do not own horses but are interested in learning about draft horses and participating in events. They host two events every year; Plow Days in the spring and Corn Days in the fall. The events are open to the public with free admission, parking, demonstrations on harnessing and plowing, and horse drawn wagon rides. Additionally, there are food and beverage stands, a flea market and craft booths.

The club has been in existence since 1988 and was founded by Windell Seeley to promote draft horses. They began demonstrating draft horse plowing at the Troy Fair in Bradford County, PA. Their focus is on plowing demonstrates, driving and handling skills used with draft horses. The members are open to helping others learn about draft horses and glad to answer questions. There are approximately 60 members and 10 active horse teams.

The first people I met were a group of woman setting up a food concession and putting on bean soup cooked over an open fire using a cast iron kettle. Alice Marks the club secretary, and Claudie Wilson, a member since 1993, held up the club’s banner for me to take a photo. They had just put the soup on and were getting the fire going. The field was covered with lush, green grass and ready for the horses to begin plowing. The ground was a little wet but not too bad considering all the rain we have received in the past week. Too much rain isn’t good for plowing in spring, although it’s not as troublesome in the fall because of the colder temperature.

The first team I met was Ken Marks, Lester Coit and Loren Coit. Loren said his father had become interested in draft horses as a kid. He owned two powerful black Percherons, Star and Blaze. They hitched up their horses and turned them towards the lower end of the huge field.

The next team I met was Mr. Weed and his grandson Mason. They have three beautiful Haflingers; Iris, Captain and Fiddle. They were checking the harnesses and preparing to hitch the horses up to a plow. The type of harness they use is called a Tab. Even though the Haflingers are pony size they are still considered a draft horse. The horses are very agile, good at obstacle courses, have great stamina, are easy keepers, and have a mellow disposition.

I followed the Weeds and their Haflinger team to the field where the Coits and Mr. Marks were already plowing. The earth was covered with grass, and several teams plowed the field at the same time. The plowshare cut deep into the soil as each team began to plow. The sharp plowshare rolled back the grass creating a neat long furrow and a ridge of soil. The idea is to turn over the upper layer of soil, bring fresh nutrients to the surface while burying whatever is growing on the top. Plowing also helps aerate the soil and allows the ground to hold moister. Once a team reached the end of the field they rested for awhile before turning around and heading back to make a new row.

A short time later, Marlea Hoyt brought her horse, Kate, down to plow the field. Kate is a 14 year old Belguim draft horse. Marlea said her father owned a team of black Percherons. She often helped him with his horses but this is the first year she has tried plowing. She said she’s still learning and it’s not as easy as it looks.

The day was perfect not too hot and not too cold. It was enjoyable to be able to watch the horses plow close up without any visual obstructions. Watching the draft horses work made it easy to imagine what it must have been like years ago before motorized farm equipment replaced the draft horse. It was wonderful meeting the people and watching them work with their horses.

When it was time to leave, I bought some donuts at the concession stand. The bean soup was still cooking when I said good-by to Claudie and headed home. I’m looking forward to seeing the Endless Mountains Draft Horse Club demonstrate harvesting corn with their draft horses in the fall. The club will be at Elsbee Farm in South Waverly, PA Sept. 24 -25, 2011.