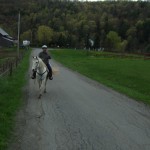 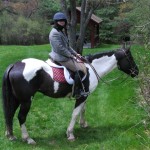 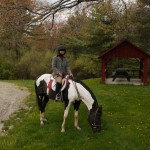 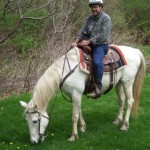 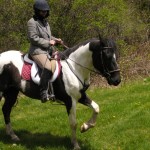 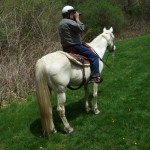 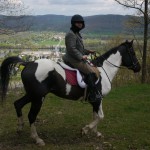 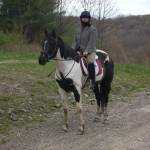 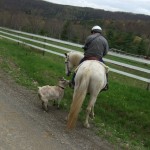 Mother’s Day 2011 was a beautiful spring day with sunny skies and balmy weather. A lot of rain had fallen in the past few weeks, and it was nice to have a day with clear skies. All the rain has caused serious flooding. The Susquehanna and Chemung Rivers overflowed their banks and trees which once grew alongside the rivers were in deep water.

Marilyn wasn’t riding but she said if Moe wanted to ride Sam go ahead. So Moe and I headed to the stables. We walked across the pasture which was very muddy in spots; even places that looked like dry grass were actually very wet. Once we brought the horses into the barn we got out the brushes and cleaned off the mud. John and another man were on the barn roof fixing a hole. The footsteps across the tin roof made the horses a little nervous, and when we took them outside to mount up they were still on edge. Once we were mounted and rode up the road the horses settled down and we started taking pictures.

The trees in the valley were already budded out and leafy, but as we climbed higher into the park it was noticeably different. The trees in the park were not as leafed out and somewhat bare. It’s a little colder at the top of Roundtop so I guess the trees are coming back a little slower. On the other hand, the grass was fresh and green after all the rainfall. It was long and full of dandelions. We decided to let the horses eat some grass while we took pictures.

We rode through the park and headed toward the barn turning onto Weaver Road. In the distance we could hear a goat bleating. She was in the pasture with her pony friends. As soon as the goat saw us she scooted under the fence and came out to greet us. The goat walked right up to Sam and stopped. She seems to like Sam, but I’m not sure if the feeling is mutual. Sam bent his head down to smell the goat and the goat started licking Sam on the nose. Sam didn’t like that too much and quickly stepped away from the goat. That’s when the goat decided to come over to CJ. I wasn’t sure how CJ was going to respond to the goat because when CJ first saw the goat coming out of the pasture he shied. Instead of waiting for a confrontation, we walked away from the goat and quickly moved down the road. The goat followed us for awhile but finally decided to go back to her pasture. It’s a very friendly goat and I had the impression she just wanted to say hello.

We made it back to the barn and turned the horses out to pasture. It was a wonderful Mother’s Day and a special thanks to Marilyn for letting us borrow Sam for the day.