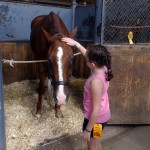 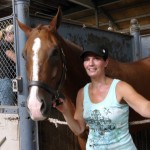 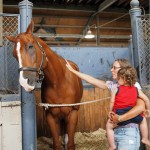 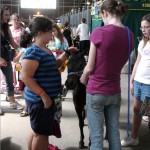 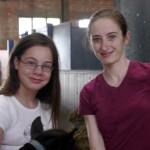 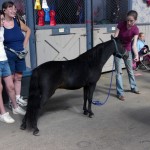 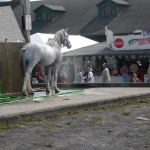 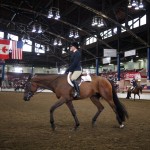 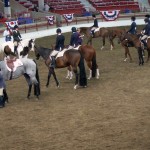 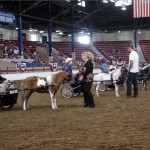 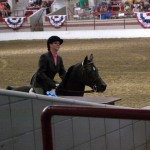 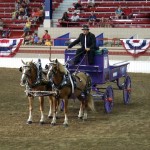 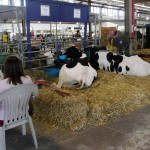 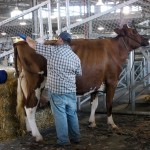 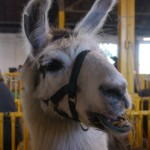 Friday morning Emma and I set out for a long country drive to Syracuse, NY and the New York State Fair. The day was warm and pleasant; although, clouds gathered it wasn’t supposed to rain and by the time we pulled off the highway and into the fair parking lot the sky was blue with just a few white clouds. The lot was filling up fast. We paid our five bucks and the State Fair employee put a pink parking slip on the dashboard as other attendants directed us past rows and rows of cars to the end of the huge lot. I pulled the car alongside a Jeep Cherokee and turned off the engine. A short walk brought us to the entrance at Gate 3.

Directly ahead of us stood a huge brick building, the Dairy Cattle Barn, which housed lots of cows, exhibits and a milking parlor. The cows were resting on soft yellow straw and munching hay. I puzzled over a sign which labeled two cows. The sign didn’t make sense to me. The first line read Hy Light and the second line read Denny Fantasy.

“I’m a bit confused about the sign over your cows,” I asked a woman sitting nearby. “What does Hy Light mean?”

She smiled and replied, “It’s the name of my son’s farm which is located near Smithville in Jefferson County, NY. The signs can be a bit confusing. The first line is always the farm name. The farmer’s surname is usually somewhere within the name. Sometimes a name describes the farm for example Hidden Acres or Ten Acres. As for Denny Fantasy – every cow has two names; the first is the name of the sire which in this case is Denny and the second is the cow’s name. The name gives an easy reference to the sire, without referring to registration papers.”

We left the Dairy Cattle Barn and walked across to the Toyota Coliseum where the horse show was in progress. Miniature horses pulling carts walked and trotted around the arena. The drivers were dressed in whimsical outfits and the event had a fairytale quality. A group of judges handed out big, colorful ribbons at the end of the competition. The next class, Plantation Horses under Saddle, came into the arena, and the riders put the Walking Horses quickly through their paces.

The aroma of food waffled through the Coliseum and we decided to take a look at Restaurant Row; just outside the building. There were many food concession stands mixed with merchants hocking their merchandise. A Greek food stand looked good; we purchased a Gyro and found a bench in front of the Country Max Horse Barn. Directly ahead of us was the back of the Coliseum where riders were warming up their horses for the next event. Not far away, a young woman bathed her horse as fairgoers looked on.

We finished eating and stepped inside the Country Max Horse Barns where crowds of people gathered to look at the horses in their stalls. One woman had her stall gate open with a rope across the front to keep her horse in. Lots of children and adults gathered around petting the gentle horse. I stopped to take pictures and spoke with the horse’s owner, Jill Buday from Sullivan County.

“How long have you been coming to the fair?” I asked.

“About 10 years. The State Fair is the only show I regularly come to. My horse, Wick, is more of a pet than a show horse,” she said.

“Are you going to be in the arena today?” I asked.

“That’s a shame. I’d love to see you and Wick in action. He’s a beautiful horse. I was struck by how calm he was with all the people coming so close to see him,” I said.

“I usually leave my horse’s gate open so people can pet him and visit. I think he likes all of the attention. My sister, Lori Brustman, is more into shows. She has taken her horse to several other states as far as Florida – even to the Quarter Horse Congress in Columbus, Ohio.”

I glanced into the adjacent stall and saw Jill’s sister, Lori, busy braiding her horse’s mane in preparation for the next event. Later, I looked the Quarter Horse Congress” up on-line and discovered that The Quarter Horse Congress is the world’s largest single-breed horse show. The show has thousands of Quarter Horses in attendance over a three week period. Last year, more than 650,000 people went to the show.

We said good-by and good luck to Jill and walked down the wide aisle between stalls. A bit further we met another young woman who was surrounded by admirers. People towered over the small horse. I remembered seeing her drive a cart pulled by a tiny, black horse in the Coliseum arena a short time before we came into the stables. The horse was very well-mannered and not bothered by the crowd.

“He’s a miniature horse called a Felabella, not a pony,” Alicia Harrington the horse’s owner and handler said good-naturedly.

“I didn’t realize,” I replied. “I saw you earlier in the Coliseum. How long have you been working with your horse?”

“Four and a half years, I started by helping my cousin, Ariel Quistorff, with her mini for a few months, then I got Rajah,” she said.

We said our farewells to the girls and left the stables when my cell phone rang. My husband, Moe, had made it to the fair and said he would meet us at the Dairy Barn. As we walked to meet him, Emma explained that she had seen the tiny horses on her travels in Argentina. The horses were breed in South America over a hundred years ago. The little horses are often used there to pull carts or sit children on to have their pictures taken.

We found Moe and the three of us walked through the crowds in Restaurant Row and the Marketplace Pavilion drifting into the Poultry Barn where we saw soft, fluffy Silkies died pink, blue and yellow. There were rows and rows of cages containing chickens, turkeys, geese, and ducks. We meandered out of the Poultry barn and strolled into the Goat, Llama & Swine Barn, finally emerging from the opposite end of the building into open sky and sunlight. After that there was only one place to go; back to the horse show where we watched the amateur hunters jump, the pleasure horses running walk, the Arabs prance and draft ponys pull a huge wagon. We witnessed only one misshape when a young woman fell from her horse and walked out of the arena unhurt.

The time flew by and before we knew it we were back in our car driving south towards Waverly and home. The first rays of a beautiful pink sunset streaked across the sky. The State Fair was enormous. We had only seen one corner of the total fairgrounds and a few exhibits. The Fair is more than just horses, there are many wonderful exhibits and attractions to see, but I have to say the horses made it a very special day for me.