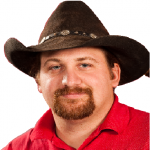 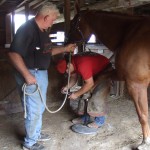 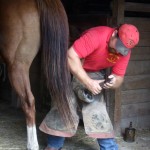 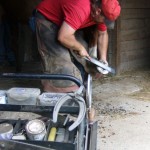 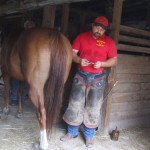 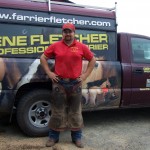 In the summer of 2010, I ordered my first pair of horse boots and made a common mistake. The boots come in different sizes depending on the shape and dimension of the horse’s hoof. The boot manufacturer stipulates that a farrier should take the measurements after the horse is newly trimmed, but since I needed the boots immediately and the farrier wasn’t coming to the barn for a few weeks; I took the measurements myself and ended up with boots that almost fit but were actually too small. By the time I realized my error, it was time for Gene to trim Pepper’s feet so I decided to speak with him about the boots.

Gene’s truck was parked in front of the barn and the tailgate doors were open exposing a huge anvil, a wide assortment of tools, and lead ropes. I walked into the barn and found Johnn holding Pepper as Gene trimmed her hoof. I explained the problem with the boots and asked if he would measure Pepper’s front feet. He measured her feet, wrote down the numbers on a piece of paper and handed it to me.

“Horse boots aren’t necessary if you toughen up the sole.The hoof’s sole becomes hard or soft depending on the conditions the horse is kept in. There is a simple method which will harden the horse’s soles so they can walk over rocks and not have sensitive feet. The process would take about a month but after two weeks you should see a big difference. Until then, use the boots,” he said.

The preparation was easy but required daily application. My friend Marilyn offered to help so we met every day for a few weeks to complete the treatment. It worked great and before long Pepper’s feet were not as sensitive over the gravel roads. Not only did it harden her soles it eliminated any trace of Thrush she might have had.

I rode two horses that summer; Pepper and Pepper’s offspring, CJ, a green broke gelding. CJ was giving me a few problems so when I encountered Gene again at the stable while he was trimming and shoeing horses I decided to speak with him.

“Gene, I’ve been having some trouble with CJ. At every opportunity, either in his stall when I’m saddling him or when I stand on the mounting block and get ready to step into the stirrup, he head butts my arm. Maybe CJ thinks it’s a game but I’d like to get him to stop. My arm is all bruised up,” I said.

“There’s a simple solution to that problem. Hold your hand open with the fingers together; when he turns his head and comes too close to you just put your fingers between CJ’s neck and cheek. You don’t have to use a lot of force; it’s a natural reaction for a horse to turn away from the pressure. He’ll get the idea and stop invading your space pretty quick because it’s uncomfortable,” replied Gene.

“Ok, I’ll try it. Another thing he does is every time I step up on the mounting block CJ gets nervous and scoots off a few steps, then I walk him around to the block again and he does the same thing. Do you have any suggestions on how to get him to stand still?” I asked.

“As far as the mounting block, he’s probably afraid of it. Horses have a natural fear of anyone or thing that pops up from the ground towards their back or head. It’s a survival instinct. So when you step up on the block it scares him,” he replied.

The next time CJ turned his head towards me while I was tightening the girth I quickly put pressure at the point between the cheek and neck; right away CJ stopped trying to butt me and stepped back. I was surprised how quickly that worked. It took more time with the mounting block but it was worth the effort because that worked too. He stopped fearing my stepping up on the mounting block and stood for me to get on. CJ sometimes took a step or two but it wasn’t out of fear, more likely he wasn’t standing square and was off balance.

If I have a problem with one of the horses, Gene is the one I ask for advice. He was born into a horse family. His parents owned and loved Appaloosas. They put him on their horses when he was a baby, and as a result, horseback riding formed some of his earliest, childhood memories. When Gene reached 14 the horses were sold. Like so many people, they found it financially hard to keep them. However, that didn’t stop Gene from riding. A neighbor friend still had a couple of horses so he rode with his friend until he graduated from high school and entered the Marine Corp. In the service he had time to think about what he wanted to do with the rest of his life. He knew it had something to do with horses and he decided to become a farrier.

Gene attended Meredith Manor International Equestrian Center in Waverly, WV. His first farrier position was working as an apprentice in West Virginia for a few months. The farrier he worked for didn’t share Gene’s basic philosophy about horses which is “listen to the horse” and through non-verbal communication develop a working relationship with the animal. Gene parted ways with the West Virginia farrier when the man had trouble catching his horse. The horse kept running away from him, so when the man finally caught the horse he tied it to a tree for two days to teach the horse a lesson. Gene decided it was time to start out on his own and headed back to Pennsylvania.

Currently, Gene finds himself busy; his business is booming. He teaches an on-line class through Alfred State College which is part of the New York State University system. Besides his work as a farrier, he trains horses and gives riding lessons. Recently, he finished Entrepreneurship Boot Camp for Veterans at Syracuse University. EBV is a foundation dedicated to helping veterans network, set-up or expand their own businesses. Someday, Gene plans to franchise his business by training farriers who will work under his guidance. His website and blog are filled with information about horses, and designed to educate the public so horses will be well cared for and have a better life.