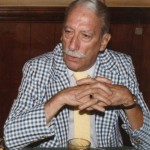 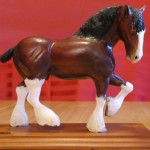 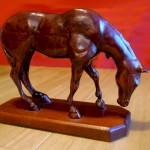 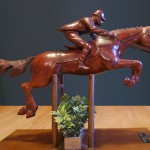 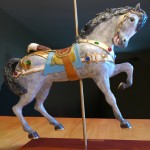 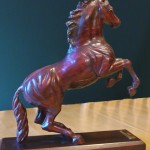 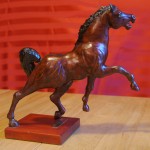 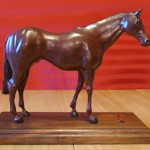 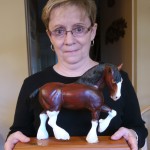 Charles Nock lived in Albany, NY, worked as a shoe salesman, raised a family and retired in 1965. He came from a family of artists, his brother, Paul Nock carved birds, his sister, Mildred Willig, designed embroidery kits which sold commercially, and brother, Stuart Nock, painted oils in the style of Norman Rockwell. In fact, Norman Rockwell granted Stuart permission to copy several of his paintings. Charles for many years also painted in oils; however, when he retired with encouragement from his brother, Paul, he decided to try his hand at woodcarving.

His first carvings were of birds; however, he soon found his interest lie elsewhere, and decided to carve horses. Early mornings when the track opened, Charles Nock traveled to the Saratoga Race Track just north of Albany to watch the race horses work out. He observed their movement, form, grace and beauty often exchanging a few words with the jockeys or exercise boys as they moved off on their spirited steeds. Later in the day, he returned to his basement studio to capture what he had seen. Time seemed to slip away as he immersed himself deeper and deeper into his work.

Charles carved in basswood, then stained, painted, varnished and sealed the sculpture. He often carved a specific breed, such as a Clydesdale or Thoroughbred. Several of his works are polychrome, which simply means painted in several colors, other pieces are monochromatic. During his lifetime, he completed approximately 25 sculptures. His principle subject was the horse.

On November 10th I traveled to Albany to meet Charles Nock’s daughter, Virginia Weston. She opened the door and invited me in. Over a cup of tea, she told me about her father.

“He was a very distinguished and reserved gentleman. His hair turned prematurely grey early in life which put some people off. It was hard for people to engage with him. I sometimes feel that his carving gave him the opportunity to meet and exchange ideas with a wide variety of people,” said Virginia.

Virginia stood up and walked away from the kitchen table to a breakfront in the dining room. Carefully, she removed each sculpture which stood roughly 12” X 16”. She cautiously brought each piece back to the table where we could look at them. Seven sculptures stood before us, each skillfully carved.

“His carvings progressed as he became more experienced from the simple techniques used in his early works to a complex, detailed style,” said Virginia.

“The sculptures are beautiful, “I replied.

“The Saratoga Library displayed his sculptures when the track was open. The library has a huge picture window facing the street, all of his sculptures filled the window during racing season,” said Virginia.

“He sold several pieces at craft fairs which were held near Albany,” she replied paused for a moment than continued, “He died suddenly in 1992.”

“I’m sorry to hear that he passed away,” I replied.

“He suffered a heart attack and was hospitalized. My father was ready to be released from the hospital when he died,” said Virginia.

“The doctor ran some final tests on my father which included a treadmill cardiac stress test. When my father was on the treadmill his heart collapsed and he died instantly,” said Virginia.

“We arrived at the hospital to take him home and were shocked to discover that he had died,” said Virginia.

“It makes you think about how short life is,” I replied.

“The sculptures were displayed at our father’s wake, which gave relatives and friends an opportunity to see them,” said Virginia.

“That was a nice tribute to your father,” I said.

“What a wonderful idea, that way each child had their own collection of their father’s work,” I replied.

I said my farewells to Virginia and climbed back in my car steering out of the driveway towards home. The winter sun began to touch the tree line casting a pink glow on the snow filled clouds. My thoughts drifted to Charles Nock, Virginia and the sculpted horses as night fell on the black asphalt of Highway 88.