Tinsel-N-Lights from Pat Miran on Vimeo. 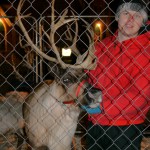 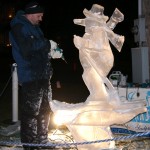 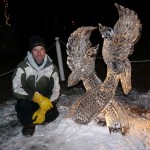 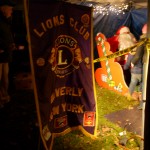 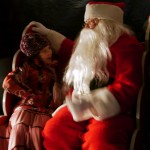 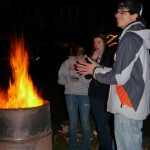 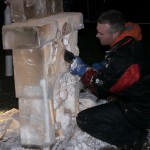 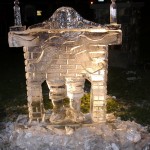 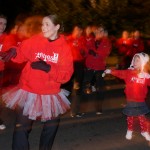 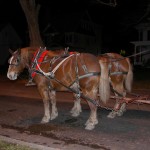 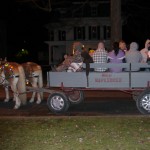 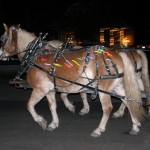 The window faced the dark street where cars drove back and forth searching for parking spaces. The entire village mobilized, heading to Muldoon Park and the Tinsel-n-Lights winter celebration. Emma and I pulled on coats, gloves, and wrapped scarves snuggly around our necks. I opened the front door. We departed leaving the warm, cozy house and stepped into the frigid December night. Our boots tapped along the sidewalk. Flashing lights reflected off the asphalt where a fire engine cordoned off Chemung Street at the end of the block forcing traffic to turn up Lincoln Street. A crossing guard banishing a huge blinking light stopped traffic for us to cross the street as a team of Belgiums, sleigh bells ringing, headed in our direction pulling an enormous hay wagon full of people.

When we reached the festival the hum of conversation, Christmas music and lights filled the park; people were everywhere. Tea candles flickered inside paper lunch bags which lined the sidewalks bordering the square. Several burn barrels, red and orange flames licking at the chilly night air, served as a gathering place where people enjoyed the heat and chatted. Lengthy tables decked out with a wide array of delicious, prepared foods stood near the bandstand. Three ice carvers, spaced some distance apart, worked with chainsaws, chisels and die grinders. A spray of tiny water particles formed a frozen mist silhouetting the carvers as they turned ice blocks into sculptures. Meanwhile, families created a line stretching across the lawn as they waited their turn to ride in a horse drawn wagon. Not far away, the Lion’s Club awning sheltered Santa in his sleigh ready to hear holiday wishes from youngsters waiting in another long line.

At the corner of Park Avenue and Park Place near the Vietnam War Memorial a chain link enclosure surrounded several reindeer and their keepers. Mike Cary, a veterinarian, owns and operates Santa’s Second String Reindeer. Through his business, he conducts farm tours, sells reindeer, and brings reindeer to festivals and fairs. A young man, James Steffen, inside the chain link fence with Santa’s team answered questions from the crowd.

“I have some experience with horses, but have never been this close to a reindeer. Do they kick?” I asked.

“That’s the good thing about reindeer. They’re safer and smaller than horses. They don’t kick and for the most part are pretty docile. The only time they can be dangerous is when the bulls are in rut or when a cow has a new born calf,” said James.

“And what about their antlers?” I asked

“The antlers bow inward, so unless the reindeer loses one antler exposing the points on the remaining antler, there isn’t anything to worry about. Reindeer lose their antlers every year and grow bigger ones, even the females have antlers. In fact, Santa’s sleigh is probably pulled by female reindeer since the males lose their antlers between November and mid December,” replied James.

We said farewell to James. A Zumba group, Fitness Senena, danced to music in the middle of Pennsylvania Ave. A crowd gathered on the sidewalk to watch the exercise group go through their routines. The dark night was lit by holiday and outdoor work lights. The buzz of chainsaws and ice grinders mingled with the muffled murmur of people talking. We stopped to speak to a man carving a snowman.

“That’s incredible, how long have you been carving?” I asked.

“I’ve been carving 16 years. I started as a professional chef and 11 years ago started an ice carving business called Sculpted Ice Works,” said Mark Crouthamel. He pointed to the ice carver some distance across the park working on a pair of doves and continued, “The man carving the Peace Doves is our lead carver, Neil Trimper.”

“The sculptures are absolutely amazing. Do you just carve ice in the winter?” I asked.

“No, we carve all year round at parties, festivals, anywhere there is a need for an ice sculpture,” replied Mark.

We moved on passing Santa and made our way through crowds near burn barrels and long lines waiting for hay rides. On the way home, we passed three teams of draft horses hitched to wagons. I waved to Max Weed, whom I had met months ago during Draft Horse Days in Lockwood, NY. He had two teams of Haflingers hitched to hay wagons filled with children and their parents. The third team of Belgiums belonged to Al Fargnoli the owner of Sweeney’s Market in Apalachin, NY. Sleigh bells rang, the chilly air took our breath away and our fingertips nipped by frost tingled. We walked the few blocks to the warmth of home filled with happy memories of the Tinsel-n-Lights celebration.

*The Tinsel-n-Lights holiday festival is a free community event provided by local businesses and donations from the public which has been held for the past four years.