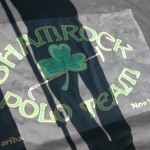 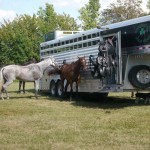 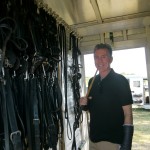 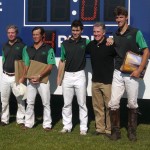 I became interested in polo when Michele Wells, the leader of my writing group, told me that when she was growing up in Unadilla people played polo at Susquahanna Stables a short distance from her home. Although I realized polo was played at Cornell University, I was surprised to hear that people played the sport off campus. After reading an article about polo in Skaneateles, a small town in the Finger Lakes Region of NY State, I decided to see firsthand how the game was played. There was no charge, all we needed to do was bring a blanket to sit on the sidelines and during intermission ‘divot’ the field, which the article stated was stomping down the upturned clumps of grass left by the running horses.

Last week, tornadoes ripped through Chemung County bringing cooler temperatures to the Valley area. Sunday morning, overcast and warm, proved just right for a ride into the park and down the trails along the Westside of the mountaintop. By the time Emma and I returned to the barn, the clouds lifted and blue skies promised a beautiful day. We headed home for a quick lunch and climbed into the car for a long ride up Route 34, through Ithaca, along Cayuga Lake until we reached East Skaneateles and the polo grounds just outside of town. The tournament was already underway when we reached the 160 X 300 yard field. Emma parked the car, we spread a blanket under a tree and sat down to watch the game.

An announcer called each play as the horses rushed up and down the field towards goal posts not far from where we sat on a small knoll. Long polo mallets swung in a semi-arch over the player’s heads as the horses galloped in a tight group pursuing a white plastic ball. The horses quickly changed direction, swerving to follow the moving ball as their nimble hooves gripped the turf. The game reminded me of field hockey which I played years ago in my high school PE class. At the eastside of the polo field, trailers stood with extra horses saddled and waiting to enter the game.

The morning haze vanished except for a few puffy white clouds that floated far above us. Each team consisted of four riders. Every rider had 3 or 4 horses which allowed play to continue and the horses to have a rest between matches. The competition consisted of matches called chukkers lasting 7 1/2 minutes each. Usually a polo game had 6 chukkers, however this game only had 4.

After the game, I walked across the level field to find out more about how polo was played; not quite sure what I would find or how things worked. I came to a small pavilion where a few players sat on folding chairs. John Walsh stood talking to his team, the Shamrocks, and cordially introduced me to the players and explained the game.

“How often does the team play in Skaneateles?” I asked.

“We play here in the summer and in winter we play in Florida,” John replied.

“Do the teams that compete here consist mostly of local players?” I asked.

“Some people are local. I live not far from here, but we have teams from all over. There is a team from Ohio here today,” John said pausing for a moment then continued, “I wish I could have played but due to injuries I didn’t play in today’s tournament. It’s hard to find a replacement because the person has to have the same handicap as I do. Brandon Van Lune, a student from Cornell, came down to take my place.”

“This is the first polo game I’ve seen. I don’t really know much about the sport,” I said.

“Many people think we use ponies but the horses used in the game are Thoroughbreds. Some horses come off the track. They’re horses that didn’t make it in racing and are retrained for polo. The head of the mallet is hardwood from the root of a tree which grows in Argentina. The handle is made of manau-cane not bamboo and easily absorbs vibrations. The length of the mallet depends on the height of the horse,” said John bending the polo mallet to illustrate its flexibility.

“I’m surprised how much that bends,” I said.

“Polo is a rugged sport. The ball travels over a hundred miles per hour. It can knock out a few teeth if it hits you square in the face,” John said.

“It sounds rough,” I replied.

He introduced me to the team; his son, Hayden Walsh, Max Secunda an Englishman, Brandon Van Lune from Cornell, Garrick Steele from Virginia. Then Mr. Walsh showed me some of the equipment used in the game. He explained that each horse had their own saddle and bridle. The tack was housed in a large horse trailer behind the pavilion. A few minutes later, John joined his team for photos and they received trophies for winning today’s tournament. After the pictures were taken, I spoke with Hayden Walsh.

“So how long have you been playing polo?” I asked.

“And what do you like about the sport?” I asked.

“I really enjoy playing polo with my Dad. I like coming to Skaneateles in summers because there are more younger players than in Florida. Fewer and fewer young people are going into the sport. Cornell and Cortland have polo teams and many of their players compete here,” Hayden said.

“Have you played polo anywhere else?” I asked.

“I’ve been in polo matches all over the East coast, Morocco, India, Beijing China, Ireland and England. My mother foxhunts, so the whole family is very involved with horses,” Hayden said.

I thanked John and Hayden for helping me understand the game of polo and walked back across the field to our car. Secretly, I had thought the sport looked like a lot of fun, but after hearing about the dangers of being hit with the ball and possibly a mallet, not to mention falling underneath the pounding hooves of the running horses, I decided I would stay on Roundtop Mountain and enjoy tranquil rides through the wilderness. However, it was pretty exciting watching from the lawn under the shade of a pleasant tree as the horses dashed up and down the field.

Polo games are every Sunday in July and August beginning at 3:00 in the afternoon; there is no admission. The games are only cancelled due to extreme weather conditions like a thunderstorm; the teams play in a light rain as long as the field is safe. If you find yourself near Skaneateles Lake stop by and watch the game, I think you’ll be glad you did.