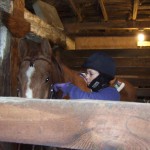 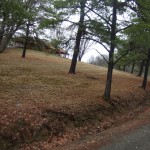 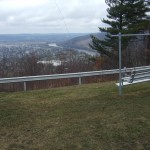 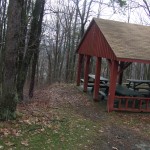 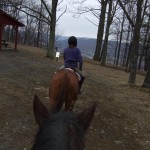 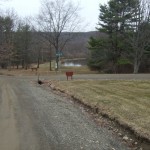 Karen and I saddled the horses and rode up to the park. The temperature was in the lower 30’s, and it was windy with overcast skies. In Pennsylvania there is no hunting on Sundays, and deer season was almost over only four days left. Usually on Sundays there are a few people taking advantage of the fall foliage and the opportunity to safely walk in the woods. We were feeling relaxed and pretty sure that we wouldn’t come across any hunters.

A big truck was parked in the lot near the gate but we didn’t see anyone. We rode by the pond and up a wide open trail to the top of the park. The view was breathtaking with the entire valley spread out below us. We planned to ride down a trail from the picnic area leading across the park and then pick up Bobcat Drive on the west side of the hill which heads back to the barn. Suddenly a rifle report shook the air, and the horses jumped bolting a few steps. The shot was directly down the slope in front of us. We waited a few minutes and didn’t hear anything. We headed towards the trailhead when another shot hit the cold air this time closer. We decided not to take a chance and turned back down the road heading out of the picnic area.

Karen turned to me and asked,”Pat, have you ever been shot?”

I thought a moment and replied, “No.”

She said, “When I was younger my brother’s friend had an accident with a gun and was shot through the thigh. It took a long time to heal and was pretty bloody and painful.”

I reflected on that thought as we descended toward the pond and arrived at the intersection where West Park road turns and cuts across the park. We decided it was safe to go through the park as long as we stayed on the road. A short distance up the road, we met a tall, muscular middle-aged man in an orange jump suit carrying a high power hunting rifle.

We exchanged friendly greetings and after he passed I turned to Karen and asked,”Do you think he knows there is no hunting on Sundays in PA?”

She said, “I didn’t know, but I sure wasn’t going to ask him while he was carrying such a high powered weapon.”

The woods were deadly quiet the rest of the ride. The cold wind whipped across the open places. The sky was grey, the trees bare and the puddles were crusted over with ice. We hurried through the park finally returning to the warmth of the barn and the safe sweet smell of hay.