Paul and the NYC Carriage Horses 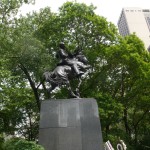 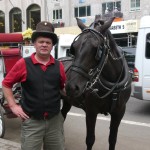 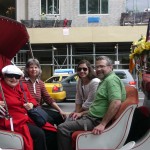 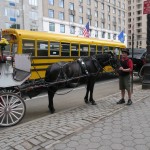 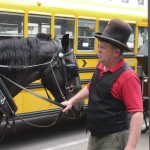 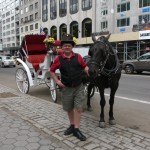 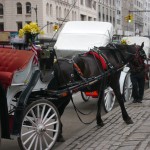 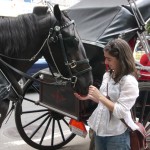 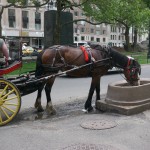 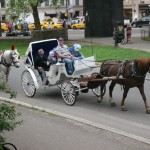 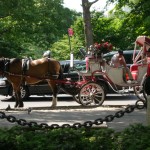 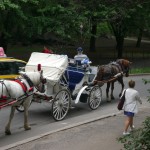 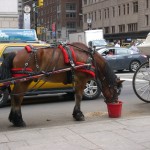 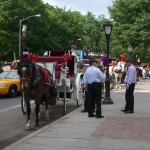 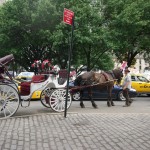 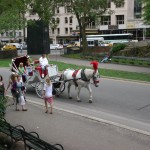 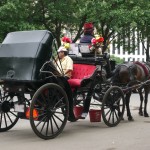 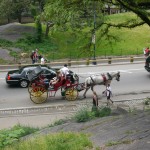 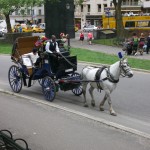 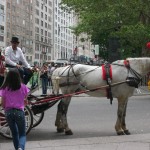 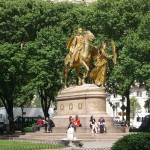 Tuesday we were headed for MoMA on 53rd Street in Manhattan. When we arrived the museum doors were locked. Odd we thought as most museums are closed on Monday. What to do? We walked up the Avenue of the Americas headed for Central Park. It was that typical NYC kind of afternoon, slightly overcast with hundreds of people on the sidewalk hurrying towards important and not so important destinations. There were lots of tourists as we approached the park.

Since the museum was closed why not try the carriage ride? Years ago, when I lived in NYC I had wanted to ride in one of the horse drawn carriages which travel through Central Park. I was under the impression that the price was astronomical and never did. After doing some research on-line, I discovered that it wasn’t that expensive. So we walked towards the park and the carriage horses.

We were stopped by two young concessioners hawking bicycle cart rides through the park. Although, they tried to explain how much better their bicycle ride was compared to the horse drawn carriages we weren’t convinced.

At the intersection of 59th St and Center Drive a good natured Irishman asked, “Would you like to take a carriage ride? Just $50.00 for 4 passengers.”

We said yes, and he introduced us to his horse Dream a quiet black Percheron/Morgan mix.

Paul McDaid came to NYC 24 years ago from County Donegal in Ireland. County Donegal is a sparsely populated county, made up of low rugged mountains with a deeply sculpted coastline, sandy beaches, bog lands, woodlands dotted with lakes, fertile valleys and friendly communities. The climate is mild; warm damp summers and mild wet winters. As the son of a blacksmith, Paul has always known horses. He grew up on a farm where there was a horse or two in the pasture. Periodically, he returns to his native country for a visit, but now lives in NYC. His career as a driver and teamster working with carriage horses spans 22 years.

Paul is there all year round even in the winter, unless the temperature reaches 87 degrees or drops below 19 degrees then the horses go back to the stable. The carriages operate seven days a week and into the night to at least 2 AM. The horses are stabled on the Westside of Manhattan in several stables stretching from 37th street to 52nd street. There are 68 carriages. All the carriages are not necessarily out at one time but with Memorial Day week-end approaching it looked like every single carriage was on the street or in the park.

“Where are you from?” asked Paul as he turned Dream toward the street.

“We’re from a little town west of Binghamton. But my sister-in-law Naomi lives in Queens,” I said. “Moe and I are in the city to pick up our daughter from the airport.”

Paul looked at Emma and asked, “So where were you visiting.”

“I was in Argentina and Chile,” Emma replied.

Paul helped us into the landau carriage. He turned Dream down Central Park’s Center Drive but we hadn’t gone far when Dream came to a stop. Paul explained that Dream was getting a drink at the horse trough located by the side of the road.

“So what’s the name of the horse you ride?” asked Paul.

He laughed and said, “I have a good friend named Pepper.”

The bicycle carts, taxis and cars drove past as we looked up at the huge rocks worn by years of foot traffic. The ride was leisurely and Paul pointed out many sites where movies were filmed, Wollman Ice Skating Rink, Sheep Meadow, and the Central Park Carousal. We talked about horses as the sound of Dream’s hooves clip clopped on the asphalt.

“Pepper is a standard bred, and started out as a trotter at the racetrack. She was sold and ended up on a farm in Ohio where she was abused and rescued,” I explained.

“It’s a hard time for horses. A lot of owners are having trouble in this economy. They’re just turning their horses loose to fend for themselves.” He said, “Owners can’t afford to feed them.”

“There were two horses turned out in the woods where I live. We have hard winters and there’s not much for them to eat when everything is frozen,” I replied.

“A friend of mine went up to PA on business. When he returned to his truck two horses were hitched to his trailer.” Paul said.

We traveled through the park. The sidewalks were crowded with tourist, people were sitting on the grass, parents pushed strollers and bike riders peddled down the park paths. Nothing bothered Dream she walked leisurely through the park as the traffic passed by.

“Do the police stable their horses in the same stable as the carriage horses?” I asked Paul.

“No, they have their own stables.”

“As horse people do you ever talk with the police about your experiences with horses?” I asked.

“Not really other than to give a tip of the hat and acknowledge each other’s presence. Some older officer friends sometimes bring their kids down for a ride. Other than that no,” he said.

Paul turned onto 59th street and we rode towards Columbus Circle where many carriages lined the street close to the sidewalk waiting for customers. The gilded statue of General Sherman glistened as it towered above the street. We circled around and Paul looked for a space to park the carriage and for us to disembark.

“You should try hitching Pepper to a cart,” Paul said.

“I’ve talked about it with a friend who has a cart but haven’t tried it yet. I’ve never driven a cart horse,” I said.

Paul pulled the carriage up to the sidewalk close to where we had started near the statue of Jose Marti immortilized in bronze and mounted on his horse. Paul jumped down and took our picture while we were still in the carriage. He helped us down.

“Would you like to give Dream a carrot?” he asked.

Emma and I fed carrots to Dream. Paul pulled on Dreams harness reins gently positioning her front feet on the sidewalk so she would be out of traffic as far as she could be.

“How did you become a carriage driver? I asked.

“A friend told me about a job driving carriage horses. That’s how I started and I’ve been working here ever since,” he replied.

“What keeps you here?” I asked.

Paul thought for a moment then replied, “The congenial, relaxed and companionable atmosphere.”

Horses and Central Park seem to go together. At one time there was a riding stable in the park. Before automobiles horse drawn carriages were everywhere in the city and the carriages of Central Park have been taking paid customers since the park opened in 1859. There have been accidents – horses hit by cars mostly. Not every horse is suited for the bustling crowded city; it takes a calm, well trained horse to navigate through traffic without freaking out.

We said goodbye to Paul and walked back through the park watching other horse drawn carriages leisurely meander through Central Park. The sky cleared and the pleasant heat from the sun warmed us as we walked toward the subway up 57th street crowded with rush hour traffic. When we reached the subway we were squished into a train headed for Queens, and back to the hectic pace of the bustling city.

2 Responses to Paul and the NYC Carriage Horses