The History of Horse Heaven 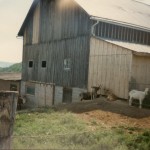 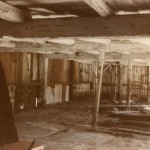 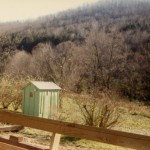 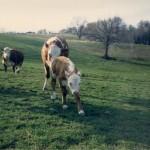 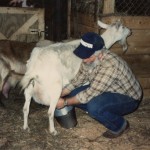 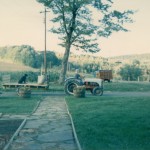 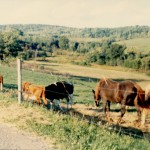 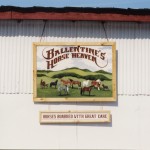 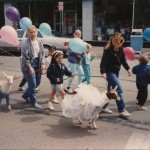 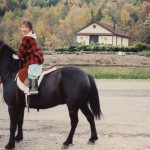 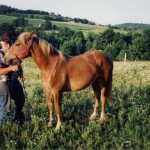 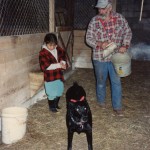 Johnn and Connie lived in town in a house on a tree lined street with cement sidewalks, and neighbors within shouting distance. Town was fine but they were dreaming of a place in the country. In 1984, the old Collins Homestead not far outside of Athens, Pa was owned by Red. He decided to divide the 300 acre homestead into subdivisions and sell off parcels keeping a few acres for himself and his trailer. Johnn and Connie came to have a look at one of the sections; the one that had the original farmhouse and barn. By the time they were through looking they ended up owning the place and 50 acres of land. Johnn and Connie kept the house in town for awhile and went back and forth between the two places. Jokingly, they began to call the place in the country the C & J Ponderosa.

The farm house had been used as a hunting cabin and Red kept ponies in the barn. The barn required repairs; a large part of the roof had rotted and fallen in. An old silo at the end of the barn collapsed and needed to be removed. The house came with an outhouse, no indoor plumbing, no bathroom, no running water, the electric wiring was old and had to be replaced, walls needed insulating and the kitchen had a wood burning cook stove for heat.

“Wasn’t it hard not having a working bathroom,” I asked.

“It wasn’t that hard,” said Connie. “I grew up in Bernice, PA about 50 miles south of here, near Mildred in Sullivan County. Bernice and Mildred are old coalmining towns deep in the wilds of the Endless Mountains. Most of the residents were Lithuanian, Polish, Russian and Italian immigrants who came to work in the mines. Many homes had outhouses and hand drawn water from an outside well.”

“No, I’m not kidding. We didn’t get in-door plumbing until I was a senior in high school,” Connie replied. “My grandmother lived across the street and our family used her hand dug well until it went dry.”

“We put a few milk pails in the back of Dad’s pick-up and drove a couple of miles to a spring,” she said. “For heat we gathered discarded coal at the strip-mines.”

“But it must have been hard,” I said, “especially in the winter.”

“It’s pretty cold when you have to go out in the middle of the night to the outhouse with snow on the ground and it’s below zero. But if that’s what you have to do – you do it.” Connie said, “So when we bought the Ponderosa having an outhouse wasn’t a big deal for me. We lived with it until we were able to put in a septic.”

Johnn and Connie worked hard putting the old place back together. Johnn built stalls in the barn and made extensive repairs to the roof. Connie stripped the woodwork in the house; they added indoor plumbing, new electric service, and insulation. John constructed a garage, body shop and PA inspection station at one end of the barn. Soon he was open for business fixing cars.

After the major work was completed on the house and barn; Johnn and Connie bought a Nubian goat named Silks. Silks had a turkey for a companion. The two animals hung out together in the pasture near the road watching the cars pass by. It wasn’t long before there were 13 goats on the farm. Connie and Johnn milked the goats and separated out the cream. Connie made and sold ricotta and mozzarella cheese.

One day a child was confronting the cruelty of his parents. His three legged dog was tied to a stake at the gravel pit not far from Johnn and Connie’s farm and left to starve to death. He told his friends and they devised a plan to rescue the dog. The kids ran to the Ponderosa and found Johnn and Connie.

“Mr. Ballentine there’s a dog tied to a stake and starving to death at the gravel pit,” said one of the kids. “Would you save the dog?”

Johnn recognized one of the children. He was the child of their friend who lived up the street. He turned to the boy and answered, “Get the dog and take it to your home. I’ll drop by and pick up the dog.”

Johnn and Connie named the black Lab Lucky. The kids told them that Lucky had lost his leg in a fight with a Bulldog. Lucky fell in love with Johnn and followed him everywhere, even riding with him on the tractor. Connie and Johnn taught Lucky many tricks; one was when Lucky was asked to ‘give me 5’ the dog lifted his left paw.

Johnn was raised on a dairy farm in Brandymore, PA. He used his knowledge of farming to add more animals to the farm and the Ponderosa grew. The farm consisted of 124 Yorkshire pigs, 84 head of cattle, 300 chickens housed in the upstairs of the barn, and numerous ducks and geese. Connie and John routinely woke at 4 AM to get the milking done. Then John headed into the garage to work on cars and Connie left for her full time job at the Robert Packer Hospital where she worked as a pulmonary function technician.

At this time, there were two horses on the Ponderosa. Johnn had a Belgium draft horse named Champ, and Connie had a Quarter horse named Dolly. Then on a dark and tragic Mother’s Day in 1989, Dolly died. Connie was very upset when she rushed to work that day. At the hospital a young patient came in and sat down for a breathing test.

The patient was confused and replied, “If I hold my breath for 10 minutes won’t I die?”

The patient, Sandy Mack, was a horsewoman too. It wasn’t long before the two women were talking about horses and developed a strong friendship. Connie bought a new horse, a chestnut Tennessee Walker from a farm about 3 or 4 miles up the road. She named the horse Ruth. Ruth was an easy going trail horse. Sandy decided to board her horse at the Ponderosa, and the two women rode together on the wooded trails and dirt roads at Roundtop Park.

Johnn built an outdoor arena at one end of the barn, and Sandy began giving English riding lessons specializing in teaching beginning riders of all ages. She came everyday to do barn chores and care for her horses and ponies. Sandy’s daughter Corey came too, and rode with her mother and Connie. Once a year on Thanksgiving, Bruce, Sandy’s husband, came to the farm to ride. Horses were beginning to be an important part of the Ponderosa.

Sandy and Connie rescued a 40 year old neglected pony named Joey. Joey had lots of abscesses. They fixed him up and he was happy at the farm. Lynn O’Brian offered to give Joey a home. She thought he would make a good a companion for her horse. Unfortunately, Joey developed congestive heart failure and had to be euthanized. They brought him back to the farm and he was buried behind the barn.

One day Sandy brought Connie a surprise gift; a sign painted by Lynn O’Brian. The sign read ‘Ballentine’s Horse Heaven’ under the sign hung a smaller sign that read ‘Horses Boarded with Great Care’. A large part of the farm was slowly turning into a riding stable.

For many years before moving to Athens, PA, Sandy and her husband Bruce lived in the artist district of Soho in New York City. One pleasant summer day Sandy brought a friend from the city to see the farm. The thin woman fell in love with one of Connie’s Yorkshire piglets. The young playwright, Liz Swados, bought the pig from Connie. She named the piglet Snowball and arranged for board in one of the stalls in the barn. The piglet grew and grew. A pseudo-rabies virus spread throughout the valley requiring all pigs to be tested. Economically it didn’t make sense to keep the pigs so they were sold to the slaughter house. The only pig that was left was Snowball. Snowball was a very happy, friendly pig greeting everyone who entered the barn. The pig ate out of people’s hands, lived a long cheerful life and finally died of old age.

As the years passed, gradually the cattle became less, and the number of horses increased until one day the horses, cats and dogs were the only animals left at Horse Heaven. Champ died and Johnn brought another Belgium horse to the farm and named her Myrtle. Lucky the three legged dog grew old. He liked to wander down by the creek near the house but had difficulty making it back up the hill. Johnn and Connie carried him home, until Lucky developed a tumor in the stump of his lost leg and died. He was buried in the pet cemetary in the yard behind the house. Through the years, other people came to board their horses at Horse Heaven. Eleven years ago Sandy gave away many of her horses to her riding students. She packed her bags, loaded 4 ponies into her horse trailer and drove out of the Valley. Sandy and her husband headed for Minnesota. Connie and Sandy are still friends and remember the days they rode together on Roundtop Park in the Endless Mountains of Pennsylvannia.