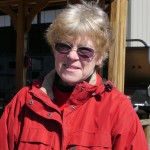 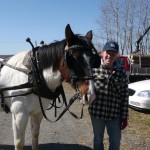 Teams of draft horses in full harness and spectators enjoyed the balmy weather as they stood in an open field just outside Trumansburg, NY. The log pulling event hosted by Carriage House Saddlery was well underway as I pulled my car off the road and parked. Log pulling began at 10 o’clock, so I missed the early action; however, there were still many teams waiting to perform the double skidding and European style log pulling. One team at a time performed. I watched a pair of Belgian’s complete the double skidding event. The horses wove through a series of poles dragging a heavy log. At the last pole, the horses turned and waited for the driver to fasten another log. Now they were ready to weave back through the poles as fast as possible without knocking any over, which completed the course.

Allie Taisey and her young horse Diesel stood near the parking lot taking a break. Diesel didn’t look like the typical draft horse, in fact, he reminded me of CJ. I walked over to Allie and her spotted horse and discovered that Diesel was a 6 year old gelding, ½ Quarter Horse – ½ Paint cross.

“How long has he been pulling?” I asked.

“About 4 or 5 times since January, this is a learning opportunity for Diesel. We have tried to start him under saddle a few times without success. He was about to be shipped off to the glue factory but he’s just too sweet a horse for that. So I’ve been working with him. I’m trying to get him to respond to commands on the ground through driving. Log pulling is a great opportunity for that,” said Allie.

“He did really well for his first time. He zigzagged between the parallel poles, knocking down a couple. On the log pulling he just pulled one log. That was about all he could pull as each log weighs about 800 pounds, but that was ok since we’re not here to really compete just get experience and support from the other people. It’s a great place to learn, everyone is knowledgeable and helpful. In the summer we’ll send Diesel to work with Greg Eliel. He uses the natural horsemanship method of training. After Diesel’s training, I’ll work with him,” said Allie.

“You’ll ride him Western?” I asked.

“I have a dressage saddle so that’s what I’ll ride him with,” replied Allie.

“Good luck with Diesel and his training. I’m going to check out some of the other teams,” I said heading for a crowd near the concession stand.

A wooden pavilion built on raised decking provided a comfortable retreat from the hot sun. At the food concession, I met Vivien Surman, a small animal vet and co-owner of Carriage House Saddlery. Vivien and her husband, Jim Wilkins, started Carriage House Saddlery in 2005 in anticipation of retirement. They felt the horses and saddlery shop would provide an enjoyable business in their golden years. Besides the shop, they own drafts horses, Warm Bloods, Quarter Horses, ponies, a Paint stallion, and a min donkey.

“My husband Jim is a forester and uses draft horses to log. Our farrier, Ke Smith, also logs on his farm with draft horses. One day the two got talking and thought it would be a good idea to have a log pulling contest. They contacted the NY State Draft Horse Club which puts on ice harvesting and haymaking events but the club didn’t want to be involved with log pulling. They also contacted the Interlaken Historical Society with the idea that they might be interested in log pulling as part of their old-fashioned fair, but again they weren’t interested. So, we decided to host the event ourselves,” said Vivian.

“How long have you been hosting the event?”

“This is our 3rd year. The first was a beautiful day with 2 feet of snow on the ground. A hundred spectators came to watch and approximately 20 teams pulled through the snow,” said Vivian.

“Was it hard for the horses because of the snow?” I asked.

“It’s normal for logging to be done in the snow. Two seasons are good for logging; winter when the ground is frozen or summer when everything is dry. Too much mud in the spring makes pulling the logs hard for the horses and the environment,” said Vivien.

“And how did the second year go?” I asked.

“The second year was a bit muddy. We had fewer spectators because it was a very cold and dreary day. This year the spectators are back and the day is absolutely beautiful. There is a bit of mud, but it really isn’t too bad,” said Vivien.

“There are two events. Double skid which is a slalom like event where the horse pulls a log between poles and a European style log pull which involves the horses pulling up to four logs. The first event mimics the horse weaving through the woods down a logging trail through trees. The second event, European style log pull, is not solely based on strength, but how well the horses behave, how steady the horses are and how well they follow commands and wait to be hooked up to the logs. The teams that are quiet, orderly, and well mannered, will be able to work in the woods where the horses need to be calm, otherwise when the team goes through the forest the logs may be damaged and the horses injuried,” said Vivien.

The environmental advantages of logging with horses are many. Horses do not destroy young trees or create erosion problems like mechanized logging equipment. The horses are able to enter areas where mechanized vehicles are unable to penetrate. As a result, many landowners and loggers have returned to using horses to extract timber from the woods.

Any type of horse may be used for logging; however, size limits the weight the horse will be able to pull. In some areas oxen and mules are used to skid logs out of woodlots and forests. Generally, a two horse team is used, but one horse may be preferable in tight areas. Loggers using horses generally favor the skid distance to be no greater than 1,500 feet to the landing where logs are loaded onto a truck. A greater distance means that it will take more time for the horses to return to the woods for another log. Hillsides create additional risks and require well trained animals. Great care must be used when teams pull downhill to prevent logs from over running the horse and handler. The skid trail needs to be cleared of objects, such as slippery rocks which may cause the logs to slip and slide into the horse. Also, slick ice conditions may cause similar problems.

Draft horse teams patiently waited their turn on the sidelines and peopled chatted as they watched the horses compete. The next person I met was a friend of Allie’s. She walked behind a bay horse in full harness. Rigby, a Spotted Draft/Quarter Horse/Mustang cross, stood quietly near the staging area. Kristy Boys from Richford, NY brought her 4 ½ year old gelding to the logging event so Rigby could gain experience and be around the other horses.

“How long have you been driving?” I asked Kristy.

“About 5 years, I feel it’s important to explore all aspects of horsemanship including driving and pulling,” she said.

“I love it. I think it is an important way to supplement our oil habit with horse power. On our hobby farm we have done some logging. Last year, the horse pulled 30 foot long sapling poles, which we used as supports for beans. This summer we plan to try plowing to prepare the ground for our potato crop. Another possibility with driving is skijoring,” she replied.

“That’s fascinating, my son and I would like to do that. Have you tried it yet?” I asked.

“Just once with Diesel, we hooked him up and a friend that skis came down. I hopped on the back of his skis, but we didn’t have a good harness. If I can get the right harness, I’m going to try skijoring next winter. The Europeans are really into it. Skijoring is all over YouTube.” she replied.

Ben Jantzen and his team of Clydesdales, Elisa and Jonah, waited to compete in the 4 log pulling event. He came down from Odessa to participate in the day’s events. During high school, Ben owned a saddle horse but now works exclusively with draft horses. When he married, a Vis-a-Vis carriage and driver were hired for the occasion. Ben wound up purchasing the carriage and now has a part-time business doing weddings.

In the 1940’s, Ben’s grandfather began a garbage hauling business with his Clydesdales as a way to earn money for college. He charged 25 cents a trash can. The cans were put on the back of a wagon, taken to the dump and then returned to their owners. Draft horses have been a part of the family farm ever since.

A handsome team of Belgians stood nearby waiting to compete. Dan Doyle and his team, Kate and Doc, walked towards the starting point for the event. I watched with his daughter Jen as he hitched up the chains to the first log.

“Have the horses pulled logs before,” I asked Jen.

“This is their first time. My dad has run a hobby farm for the past 20 years. He uses the horses for bobsled and hay rides. This is the first time he’s tried pulling logs with them,” she replied.

Suddenly, Dan’s team jumped a little too fast trying to pull 3 logs. The logs scattered in odd directions and jammed. Two men with long hooked poles helped move the logs as Dan steadied the horses and Jen helped. Once the jam was fixed the horses went on to finish the course.

Dan’s team was one of the last to perform. The log pulling event at Carriage House Saddlery came towards closing. The day was still radiant, not a cloud in the sky, when I packed up my belongings and headed toward Ithaca and home. It wouldn’t be long before the horses were loaded into their trailers for their trip back to the barn.

This entry was posted in Uncategorized and tagged Carriage House Saddlery, horse training, logging with draft horses. Bookmark the permalink.