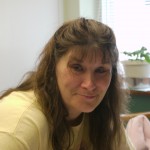 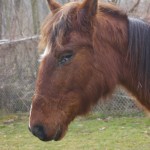 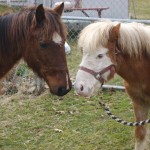 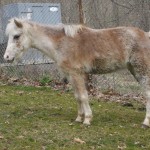 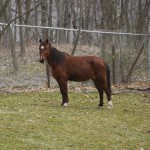 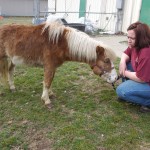 The 10 o’clock sun shone through mist tinting the countryside with a bluish hue. The car’s engine hummed along Route 220, winding through the mountains, passed railroad tracks and farms. I drove towards the Bradford County Humane Society just north of Ulster to meet with Anne Shaffer. Recently, three ponies were rescued from a greenhouse and I was on my way to see them.

I pulled the car into the driveway and parked by the outdoor dog kennels. All the dogs started barking as soon as they heard my footsteps. A couple of elderly women also headed for the front door, and the three of us entered together. Anne stood in the office behind the front desk with a clipboard and pen completing routine paperwork.

“Hi, I just need to complete this form and I’ll show you the ponies,” she said.

We walked around the outside of the building to a chain link enclosure directly behind the shelter. At the far end of the small pasture stood a covered equine run-in, which provided a safe place for the ponies during inclement weather. Anne entered the pasture and attempted to catch a pony named Spitfire.

“He’s hard to catch,” said Anne reaching for some grass to entice the little stallion.

“They are all in sorry shape. Misty, a little palomino mare, is the shyest. She pretty much keeps to herself. Princess only has one eye but is friendly,” said Anne pointing to a brown mare walking toward her.

“That’s too bad she lost her eye. I wonder how that happened.” I replied.

“We’re not sure,” answered Anne.

Princess walked up to Spitfire and stood next to him as Anne snapped a lead rope to his halter. The brown pony gently nuzzled the little stallion. Her leathery socket hid the atrophied remains of the injured eye. A short time later, Misty, the little palomino came and stood next to her pasture mates. All of the pony’s hooves were long, curling slightly at the end and badly in need of a trim.

“I have to go back inside but Becky will help you,” said Anne as a young woman walked towards us.

“All right,” I turned towards Becky and asked, “How long have you been working here?”

The ponies were rescued from a residency which kept the animals in a greenhouse meant to grow flowers, not stable horses. The greenhouse had a cement floor, broken glass, and unsanitary conditions. Humane Officer, Laura Hawbaker, requested a court order to remove the animals because of the unhealthy environment and general poor health of the ponies. In the weeks to come a court hearing will convene to decide the fate of the animals. A judge will listen to both sides of the complaint and make a decision. The case may go one of two ways. The Humane Society may be given the ponies, in which case, the animals have a chance for a new home or the ponies may be returned to the owner, usually with the stipulation that the unhealthy conditions the animals were found in are corrected.

I left the pasture and found Anne busy in the front office helping a middle-aged man adopt a dog. The shelter filled with people. They stopped in front of the wire cages, peered in and looked over the stray and abandoned dogs. I said farewell to Anne, returned to my car and headed for home. It will be several weeks before the Judge reaches a decision; in the meantime, the ponies are safe at the Bradford County Humane Society Animal Shelter in Ulster, PA.