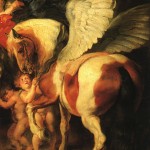 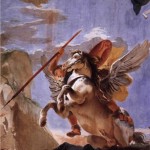 For thousands of years, stories about horses have circulated among people and between cultures. There have been true and fictional stories of racehorses, faithful horses, ordinary horses, war horses and mythical horses. Perhaps one of the strangest and oldest stories concerning a horse is Pegasus, a mythical horse, created by the ancient Greeks.

Pegasus’s mother, Medusa, angered Athena by claiming that the goddess was jealous of her beauty. Another version of the tale equates Athena’s rage to Medusa having sexual relations with the god Poseidon in Athena’s temple. Whichever is the case; Athena punished Medusa by turning her into a hideous winged creature with snakes for hair. And if that wasn’t enough for good measure, the goddess cursed her so that anyone looking upon Medusa would be turned to stone.

There are several versions of how Pegasus’s father, Poseidon the god of horses and the sea, impregnated Medusa. Either by turning himself into a horse or a bird; Poseidon fathered the twins, Pegasus and Chrysasor. Of course, Pegasus’s birth wasn’t at all ordinary either. Pegasus’s life begins with a tale of maternal death and defeat.

The heroic task of killing Medusa fell upon Perseus. Several gods helped Perseus by giving him magical weapons; a bronze shield which functioned as a mirror, an unbreakable sword, winged sandals, and a helmet which turned him invisible. When he beheaded the pregnant Medusa, blood gushed out of the creature’s neck, and from the blood sprang forth a boy, Chrysasor, and the winged horse Pegasus.

Now that the winged horse was alive and kicking, it was time for some adventures. The most famous tales concerned his rider, Bellerophon. Again, Athena comes into the picture giving Bellerophon a magic bit or bridle to tame the spirited horse. She also suggested the hero sacrifice a white bull to the horse’s father, Poseidon, to seal the deal. In any case, Bellerophon captures Pegasus and rides off to slay fire-breathing Chimaera.

Bellerophon made a cardinal mistake when he decided to ride Pegasus to Olympus. He believed because of his triumph over the evil Chimaera, he deserved to fly to the realm of the gods. Pegasus with Bellerophon on his back headed towards the heavens, however, the hero never made it. Zeus in his fury sent a gad-fly to bite the horse causing Pegasus to buck off his rider. Bellerophon fell back to earth; some say to his death others say that the hero wandered aimlessly as a blind hermit. In any case, Pegasus continued the flight and made it to Mount Olympus.

At Olympus, Pegasus joined Zeus’s stables becoming the mount of Eos, goddess of the dawn and Apollo, god of light and the sun. The horse served Zeus by carrying the thunder and lightning needed to make thunderbolts. Finally, Pegasus earned a place in the heavens as one of the constellations.

Perhaps fact is stranger than fiction, but in this case the Greek myth of Pegasus, the flying horse, has to be the most imaginative story I’ve ever heard. Philosophers, psychologist and scholars have had a heyday with the myth finding hidden meanings behind the story. They’ve had a long time to analyze it. Perhaps after all is said, the myth is just an extremely entertaining story which has been around for a very, very long time.