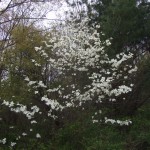 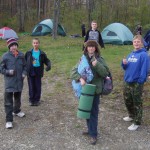 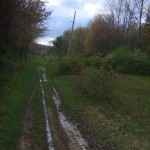 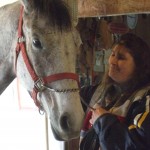 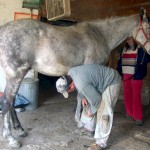 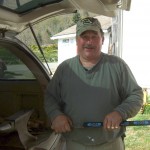 My late evening ride through Round Top park reverberated with periodic drumming produced by woodpeckers searching for grubs in dead trees. A golden sun cast long slender shadows across open woodlands illuminating a few patches of green grass surrounded by old leaves. Tender new buds just beginning to unfold sprouted from tree branches and random dogwoods offered a spray of white flowers which seemed to dance among maples and oaks.

Pepper trotted up West Park road to a baseball field dotted with domed two man tents. A few Boy Scouts worked on raising their tents as others settled in for the night. Several scouts hurried over to see Pepper. After a greeting and exchanging a few words, Pepper and I headed towards the pond following power line poles. Not far up an access road sat a huge porcupine. The animal saw Pepper, turned, faced us and rose up on his back legs. He tucked in his front legs and sharp quills trembled on his back. For a brief moment Pepper looked at the creature, then continued to walk forward as the porcupine hurried for cover under dense undergrowth. It wasn’t long before I unsaddled Pepper. The evening sun ducked behind soft, blue mountains and twilight deepened shadows threatening total darkness.

Warm spring days brought people to Ballentine’s Horse Heaven to ride. Cristina came to learn basic horsemanship. She leased Johnn’s horse, Sam, a few weeks ago. Sam, an amenable Belgium, stood patiently as she brushed and saddled him; although, once outside couldn’t resist nibbling the rich green grass.

Early Monday morning, Anne Shaffer and Donna Horton came to Horse Heaven to meet with farrier, Kenny Bellis. Shadow and Socks needed to be shod for riding season. Socks received a new pair of steel shoes and quietly returned to his stall. Anne brought Shadow into an open area in front of the barn doors, for now it was his turn. Donna sat down on a grain barrel to watch. Suddenly Shadow reared straight up not wanting any part of what Kenny had to offer in the way of shoes. Donna jumped out of the way and decided it was time to head back to work.

My SUV bumped along Murray Creek road. Just before I reached the barn, Donna’s car pulled onto the lane. She steered her car towards Athens but stopped when she saw me and rolled down the window.

“I’ve got to go back to work, but we’ll ride together soon,” she said smiling.

“Sounds good to me,” I replied.

I pulled my vehicle in front of the barn and grabbed my tack from where it sat on the rear seat. Kenny already had a shoe on Shadow’s back hoof. He reached down to pick up the other hoof when I came over to watch. It wasn’t long before Shadow had his trim, new shoes and nails crimped.

“How long have you been a farrier,” I asked.

“19 years,” replied Kenny returning his equipment to the back of a mini-van.

“Mainly in the Valley?” I asked.

“Well actually I travel all over ….every 8 weeks I go to Tennessee,” replied Kenny smiling.

“Tennessee, isn’t that far to go to shoe horses?” I asked.

“About 700 miles one way….a few years ago some people from here moved to Athens, Tennessee. They asked me to come down and take care of their horses. It wasn’t long before their neighbors wanted me to shoe their horses too. So now, I travel down there every 8 weeks,” replied Kenny.

Kenny finished packing up his files, horseshoes and tool box. He turned out of the driveway headed for another barn and another job. Anne brushed Shadow and began saddling up for our morning ride while I hurried into the pasture, halter in hand, looking for Pepper. The horse picked up her head as I drew near and waited for me to slip on the halter. By the time Pepper and I arrived back at the barn, Anne and Shadow were ready to go.

Anne and I rode up Oakfield Drive past Johnn’s hayfield towards a huge barn on top of the hill. At Highland Drive we turned and galloped the horses to the top of another hill, where we reined in our mounts anticipating a steep slope on the other side of the rise. We turned left onto Meadowlack Drive. The gravel road twisted through tranquil countryside until it reached a farm. A red dairy barn sat a few feet from the road with a farmhouse directly across the lane. Here our horses hesitated, not wanting to pass a long line of black water troughs nestled next to a wire fence. Once we traveled away from the farm our horses settled down and we picked up another segment of Highland Drive. The street meandered along a mountain creek lined with evergreens and grey slate rocks stained by moss. Highland Drive ended at a stop sign. We turned Shadow and Pepper onto Mile Lane and shortly picked up Tutelow Creek road. Near the intersection of Tutelow Creek and Mile Lane a backhoe blocked our way. Two men worked positioning a drainage pipe into rocky ground near a stream. When the work crew saw us, the backhoe driver pulled his vehicle out of the road and turned off his engine for us to pass by.

“…A problem with the road?” I asked pausing a moment, letting Pepper relax next to the massive earthmoving equipment.

“Damage from the flood,” he replied.

“So much destruction,” I said.

Shadow and Pepper headed towards home. Tutelow Creek road forked and we took Dunkley Hill road which branched off to the left. A Croft delivery truck rumbled down the street towards us. I decided to hang back near the fork in the road until the truck passed. After the truck disappeared around a bend in the road Pepper trotted to catch-up with Shadow, and then the horses cantered up a long hill. At Beaver Pond road we turned right and traveled until we picked up Murry Creek road.

We had ridden in a full circle and came back to Horse Heaven. All of Shadow’s shoes still gripped his hooves. His new horseshoes didn’t give him any discomfort. Thanks to Kenny, Shadow was officially ready for riding season.