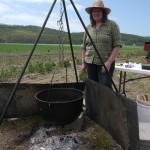 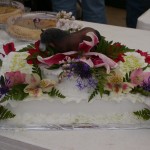 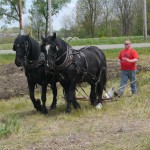 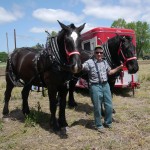 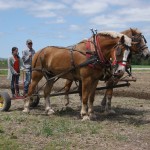 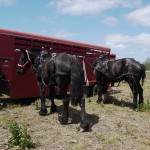 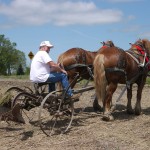 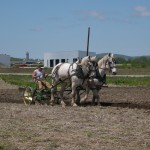 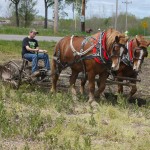 The Endless Mountains Draft Horse Club’s annual Plow Days began early on May 5th. The sunshine melted away the early dew as horse trailers pulled into Elsbree’s field just off Route 220 not far from Top’s grocery store. I looked across the road at the field where the Blue Swan Airport used to be. New factory buildings were under construction at one end of the old runway. The ultra-lights and small planes have been gone for a long time.

Emma and I walked by teams of horses plowing in the field, and headed towards a pavilion which covered rows of picnic tables. Not far off, Claudie Wilson prepared bean soup over an open fire the same way people did hundreds of years ago. She stood next to a three legged metal tripod which suspended a cast-iron pot called a Dutch oven. This heavy cast-iron pot was developed in the early 1700’s and remained popular well into the 1800’s.

Last year the club hosted Plow Days in a field just outside of Lockwood, NY on Route 34. Club members came from Pennsylvania and New York State to participate and demonstrate to the public how draft horses were used in farming. Besides being able to witness the horses plowing the field there were horse drawn wagon rides. The event was open to the public with free parking.

Draft horses were in great demand during the first part of the Industrial Revolution from 1750 to 1850. Animal power was needed to build America making large, heavy horses important in transportation, the building trades and essential to agricultural. The 19th Century saw the development of modern day draft horse breeds and by the 1920’s, there were approximately 26 million draft horses in the US. However, with the invention of the internal combustion engine all horses were quickly replaced on streets by the automobile. By the 1950’s tractors had replaced most draft horses except on Amish farms. Plow Days offers an exciting glimpse into the past and a splendid opportunity to see the beauty and power of the draft horse.

At the pavilion I met Alice Mark, the club secretary. I remembered Alice from last year. She and her family traveled from Groton, NY, located just north of Ithaca, to attend Plow Days. They brought their trailer and the family camped for the weekend. Her grandsons Lance and Loren Coit brought their team of black Percherons to demonstrate plowing.

“Well, at 4:00 the club holds an auction to raise money. Carol Elsbree makes a cake for the auction which I always bid on and win. My top bid is always $30.00. Nobody wants to bid against me, except other family members. So someone in my family always takes home the cake,” said Alice showing us a beautiful cake decorated with a toy horse and flowers.

Emma and I walked further down the field where trailers were lined up. Charles Kellogg untied his Percherons from their trailer and turned them around for me to take a picture. He came from his home in New Albany, PA which is about 40 miles away to attend. For the past 7 years, Charles has been coming to the event. This year he brought his team of black Percherons, Tom and Jerry.

“Just for the fun of it,” he replied.

We watched a man driving a forecart pulled by a team of Belgians head down the field. I stopped for a moment to speak with Cindi McCarty.

“I come to help Robert Bundle with his horses,” said Cindi.

“Where are you from?” I asked.

“We come from Dushore. PA. I run the Red Barn Farm Market on Route 220 about a mile south of New Albany. I enjoy coming to Plow Days. It’s a great way to get together with other people who enjoy draft horses. We also come to Corn Days in the fall. At Corn Days, the men bundle the corn and load it onto wagons drawn by horses. It’s really something to see”” replied Cindi.

“I wanted to see that, but last year Corn Days was cancelled because of the flood,” I said.

I briefly glanced over my shoulder and saw that Emma had hopped a ride on Robert’s forecart. The team of Belgians traveled up and down the field and before long stopped near where Cindi and I stood.

Emma jumped off the forecart and Robert Bundled said, “Would you like a ride?”

“Sure,” I replied climbing aboard.

I held on to a metal bar that ran along the front and side of the cart. Robert signaled the team to walk and the forecart sprang forward. I felt dwarfed by the huge horses. The uneven ground created a surprisingly bumpy ride. The horses worked in perfect unison. We traveled past other teams plowing furrows in the field.

“How long have you been working with horses,” I asked.

“I started working with horses 5 years ago. For the past 2 years, I’ve attended the Pine Valley Maple Festival organized by Maxine and Charles Kellogg. I’m not really into plowing. My team is trained to pull heavy weights,” replied Robert.

A horse pulling completion involves a harnessed team or single horse hitched to a stone-boat or weighted sled. The winner is the team which can pull the greatest weight over a short distance. The weight a horse pulls at a horse pulling competition is determined by a machine called a Dynamometer. The machine tests the maximum pulling power of the horse or team of horses. The dynamometer is set at a starting load of 1500 pounds. If a team can’t pull the weight they are removed from the competition. The remaining teams pull increasing heavy weights until a winner is determined.

“Where do you pull weights with your horses?” I asked.

“A few weeks ago I took them to the Maplefest in Troy, PA. They pulled 7,200 pounds a distance of 11 feet, a full pull is 26 feet. That’s the heaviest load any horse I’ve owned has ever pulled,” he replied.

“Draft horses are really powerful animals. I didn’t know they could pull that much weight,” I said.

“Well, you can’t start out pulling large weights with a team. You have to start with small loads and build the horses up to the higher weights,” he said.

Robert stopped the forecart next to Cindi and Emma. I thanked him for the ride and stepped down. Emma and I walked back toward the pavilion, teams of horses worked in the field, and Claudia stood next to the iron kettle filled with bean soup. The afternoon turned hot but the big fluffy clouds still dotted the blue sky. We waved farewell to Alice and Claudia, and made our way back to our car parked at the side of the road. I already have plans to attend Corn Days in the fall, weather permitting.