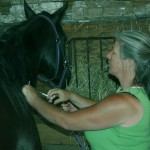 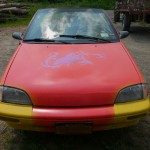 The morning proved humid and warmer than usual with the thermometer pushing into the 80’s. Connie and I passed the time chatting in the barn as we waited for Dr. Rodgers’s arrival. Five horses needed their yearly vaccinations: Pepper, CJ, Sam, Myrtle and Jupiter. Connie and Dr. Robin Rodgers had known each other for many years and CJ owed his life to the country vet.

On Christmas Eve in 2003, CJ came in to the barn with a leg injury. Blood and synovial joint fluid oozed from a puncture wound near his fetlock. Immediately, Connie called the best horse vet she knew. Dr. Rodgers took the young colt to her barn, hooked him up to an IV, administered antibiotics, cleaned and drained the wound. CJ’s flexor tendon sheath was injured and infected, which in most instances results in death or serious lameness, ending with the horse being euthanized. CJ stayed on total stall rest in the vet’s barn until March, and then he returned to Ballentine’s stables. Dr. Rodgers told Connie to keep CJ on glucosamine and watch him as it is common for the infection to return. However in CJ’s case he recovered 100%, no infection or lameness, which prompted Dr. Rodgers to nickname him the miracle horse.

Dr. Rodgers stopped her small, sporty car in front of the barn. The reddish orange and yellow stripped convertible had a blue dolphin painted on the hood. She stepped out of the car and walked to where Connie and I waited.

“I’m just doing shots so I don’t need any big equipment. The convertible gets 40 miles to the gallon. It’s good for the economy and the environment,” said Dr. Rodgers.

“I painted it myself,” replied Dr. Rodgers.

The vet took a few syringes from an insulated bag, drew vaccine and capped the needles. We followed her to Sam’s stall where Dr. Rodgers administered shots, and then proceeded to Myrtle’s stall where she quickly vaccinated the mare.

“So when did you first start with horses?” I asked.

“When I was 2 my parents put me on a carousel and I’ve been in love with horses ever since. Horses are a disease that you’re born with. There is no cure for it. It’s a lifelong affliction. I inherited the ‘horse gene’ from my Dutch grandmother. She loved horses and was the only person who could handle my grandfather’s horse,” said Dr. Rodgers.

“Didn’t your grandfather ride the horse?” I asked.

“Only when he had to, he was a General and Generals need a horse for parades and ceremonial functions. Otherwise, he didn’t have much to do with the horse. My grandmother took care of the horse and rode it when nobody was around,” replied Dr. Rodgers.

“Are you from Holland?” I asked.

“I was born there. My parents traveled around Europe for a few years and ended up in Saint Thomas. We moved to NJ when I was 6 years old. We lived next to a farmer who owned a Friesian, which is a Dutch carriage horse. When I turned 8 years old, the farmer let me gallop his horse through the woods,” Dr. Rodgers replied.

After completing a Bachelor’s of Science degree, Robin enrolled in Cornell Vet School. While attending vet school, she rented a place in Spencer. She enjoyed the beautiful countryside and culture of the Ithaca area. Dr. Rodgers decided to remain in Spencer, beginning her veterinary practice after graduation in 1995. Interested in preventive pet healthcare, she created a Wellness Wagon; a mobile clinic for dogs and cats. She parked the unit at her house and made visits to local farms. The Wellness Wagon made regular pet checkups easier and allowed Dr. Rodgers to offer affordable healthcare to pet owners. She has treated all types of animals, cows, emus, big horn sheep, lamas, and pot belly pigs to name a few. Additionally, she rehabilitates injured wildlife and has helped red-tail hawks, possums, and raccoons return to their native environments.

Ten years ago, Dr. Rodgers suffered serious injury in a motorcycle accident. She was completely paralyzed for 2 weeks. Gradually, she regained muscle control, but didn’t return to riding her motorcycle for a year. Scarring on her spinal cord prevented rotation of her neck. After corrective surgery, she began riding her motorcycle.

“The worst thing about being paralyzed was not being able to reach out and touch another person. I had to ask someone to touch me. I couldn’t even pet my dog. The accident changed my balance. I put more lightness into life and became interested in preventative medicine. I discovered the bottom of the ocean and the beauty of the underwater environment, which prompted me to buy the economy car,” said Dr. Rodgers.

Connie and I followed Dr. Rodgers to the other end of the barn where Jupiter, Pepper and CJ waited in their stalls. Connie held Jupiter and Pepper for the vet and when CJ’s turn came I held him. All the horses were calm and didn’t seem to mind the needle.

“I tell everyone to hold the horse by the lead rope. If you hold the animal by the halter and the horse pulls away or rears because he doesn’t like the shot you could pull your rotator cuff. By holding onto the lead rope, the worst you’ll get is a rope burn,” said Dr. Rodgers.

She finished with Pepper’s shots, the last horse, and walked towards the barn entrance. The sun had risen in the sky and the clock ticked past noon.

“We have a new boarder coming to the stables from Missouri. She keeps her horse in her backyard there and plans to trailer the horse herself. Anything I should tell her before she brings the horse?” asked Connie.

“It’s good she’s using her own horse trailer. The commercial truckers load a bunch of horses into their trailers and by the time the horses get to where they are going they’re all sick,” she paused for a moment then continued, “The horse should be isolated from the other horses for 5 weeks because of Strangles. She should get a health certification for Coggins since she’s crossing state-lines. I’d have her check with the states she’s crossing; every state has their own regulations.”

Stranges is caused by the bacterium, Streptococcus equi. The disease is highly contagious and causes serious infection. The disease is ably named as once the animal becomes ill pus fills the head and throat placing a strangle hold on the horse. Mucosa in the head and throat become inflamed and swollen, eyes may swell shut and infection drips from nostrils and eyes. The animal’s lymph nodes often rupture. Some call Stranges the ‘bubonic plague of horses’ and many animals die from the disease.

Dr. Rodgers and I sat in the barn near the saddle stands, grain barrels and mounting block. We talked about horses. Over a 30 year period, Dr. Rodgers has worked with horses and for the last 17 years been a vet. She owns 9 horses, including mini-horses and a 3 year old Spotted Draft which she uses for dressage.

“I do dressage, indoors in winter when the weather outside is bitter. It keeps me sane and gives me something to do. Dressage keeps the horses fit, and was originally used to train war horse’s enabling the animals to be a useful partner in battle. Any horse can do dressage. I also practice Western reining which is really a type of dressage. Recently, I rode in a 50 mile competitive trail ride in Burdett, NY. We camped, about 50 people attended,” said Dr. Rodgers.

“And what do you do with your mini-horses?” I asked.

“I hitch them to a cart and they make me laugh,” replied Dr. Rodgers.

“I used to think ‘What can you do with a mini? They are so small.’ but then I went to the NY State Fair and saw the minis compete, pulling their owners in little carts. I realized they do have a purpose other than just being a pet,” I said.

“They are a great way to stay in touch with horses when you’re old and can’t ride any longer,” said Dr. Rodgers.

“What made you decide to become a vet?” I asked.

“It’s a sad story. I wanted to help animals. I love preventive healthcare. It’s sad to see animals ill or injured and frustrating when many problems could have been prevented except for ignorance. I find the fire engine stuff depressing; arriving just in the nick of time to save an animal, seeing horses gravely injured,” replied Dr. Rodgers.

“Over the years you must have seen some tragic events,” I said.

“Recently, I cared for a horse that skinned himself on a piece of rebar attached to a concrete feeder. He peeled the skin completely off his belly, up both sides to his flanks to the hip. When I got there a massive piece of skin, still attached, hung near the horses back legs, it had blood supply and pulse so I decided to suture it back onto the horse and give him antibiotics,” said Dr. Rodgers.

“How is the horse doing?” I asked.

“He’s recovering nicely. It happened in April and 80% of the area reattached. The other section will just have to grow back. It will take some time but should be ok,” Dr. Rodgers said.

“Are flies a problem?” I asked.

“Maggots can be a problem, but actually they help by feeding on dead tissue. They clean up the wound; but Screwworm larvae are another story. They don’t stop at the dead stuff, but eat right through an animal. Luckily, they have been eradicated in the US,” Dr. Rodgers replied.

The Screwworm is the larvae of a greenish-blue fly with large reddish-orange eyes about twice the size of the ordinary housefly. After mating, the female Screwworm fly lays her eggs on open wounds. One fly can lay up to 400 eggs at a time. When the eggs hatch into larvae within 12 hours, the larvae feed on the animal eventually killing it, literally eating the animal alive. Millions of dollars have been spent by the US government to eradicate the insect. In 1966 the US eliminated the insect from within its borders and Mexico became Screwworm free by 1991. Currently, Screwworms inhabit Central America. The US and Mexico are vigilant on making sure the insect does not reappear on their soil.

I waved goodbye to Dr. Rodgers as she pulled out of the driveway; headed for another farm visit. The day rocketed into the 90’s. All the horses remained inside the barn because of the heat and would be turned out in the evening when the temperature cooled. The summer schedule had begun.