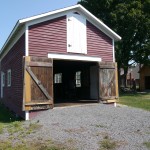 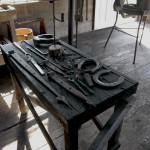 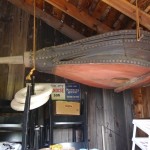 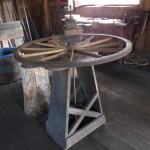 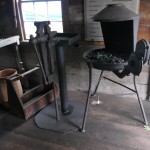 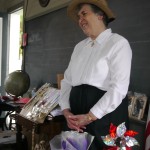 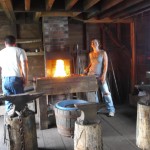 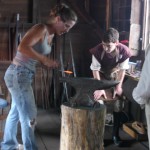 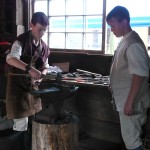 The morning temperature was pleasantly warm on August 31st, but by noon the thermometer reached into the 80’s and beyond. I pulled off Highway 86 at the Corning exit around 10:00 in the morning, drove down Denison Parkway, turned at Bridge Street, crossed the Chemung River, and turned left onto W. Pulteney Street. The Benjamin Patterson Inn Museum’s parking lot was empty except for one or two cars. The museum consisted of several restored 19th century buildings which included the Benjamin Patterson Inn (c. 1800’s), Starr Barn (c. 1800’s), Cooley Blacksmith Shop (c. 1870), Mack Family Log Cabin (c. 1855) and Browntown Schoolhouse (c. 1878). I stepped into the Cooley Blacksmith Shop and met Leon Golder, a board member for the museum. Leon told me the story behind the blacksmith shop.

White Cooley moved from Tioga County, PA to Beaver Dam, NY in the early 1860’s. Public records held by the Schuyler County Historical Society listed him as a horse dealer in 1868. He built a blacksmith shop on his farm between 1870 and 1875. The privately owned shop served White’s personal needs well, allowing him to shoe his horses, make farm equipment repairs, fix buggy tyres and craft other metal items needed for the farm. Overtime, people in the area hired his services as a blacksmith. His business grew; there was no other blacksmith shop in the area. Local farmers and people traveling through the area stopped by his shop to have their horses shod or equipment fixed.

“An important job for a blacksmith in those days was repairing buggy tyres,” said Leon.

“The metal rim which surrounds the outside of the buggy wheel is called a tyre. It was common for rocks to work their way between the tyre and the wooden buggy wheel. When this happened the metal rim became loose and had to be repaired,” replied Leon.

“How would they repair the tyre?” I asked.

“A wheelwright or blacksmith would tighten the metal tyre by using a tyre shrinker. He heated up the metal rim, placed it into the clamp which reduced the circumference. This made the tyre smaller. Then, the metal tyre was pulled snuggly into place, back on the wooden wheel,” explained Leon.

“And what is the difference between a wheelwright and a blacksmith?” I asked.

“A wheelwright made and repaired all parts of the buggy wheel. The blacksmith often worked for a wheelwright or did farrier work. Cooley did some rim repair. Wheelwright equipment was found in his shop when the museum purchased it,” replied Leon.

At the end of the 1800’s mechanized farm equipment rapidly replaced the horse, and White Cooley adapted to the changing times. Somewhere between 1885 and the early 1900’s White began selling a brand of motorized farm machinery called ‘Champion’ manufactured in Syracuse, NY. He sold hay mowers and manure spreaders. He continued to do blacksmithing; now he repaired motorized farm machinery. His place was near the railroad tracks which helped his business. When his son, Charles, was old enough; he helped his father in the shop. At some point White replaced the bellows with a blower to increase airflow to the forge. The bigger blower meant a hotter fire which increased the capacity of the forge.

“Important to blacksmithing is the type of coal used. Home owners used Anthracite, a hard coal, to heat their homes. Bituminous, a soft coal, was important to the steel industry,” said Leon.

“Bituminous coal burns slower. It has many impurities, such as oils, methane and other gases produced from rotting plants trapped millions of years ago in the rock. However, Bituminous coal, once burned turns into coke which produces a much hotter fire than Anthracite. The fire burns from a reddish, orange to a yellowish, white somewhere between 2200 and 3,000 degrees, which is perfect for blacksmithing,” explained Leon.

As technology, industrial output and mass production in America intensified, the blacksmithing business died out by the late 30’s and early 1940’s. The Cooley Blacksmith Shop remained on the farm in Beaver Dam; unused and neglected for many years. In 2006, the current owner of the property, Kenneth Blanchard, auctioned the blacksmith shop. The Benjamin Patterson Museum sent several board members including Leon Golder to look over the building. After negotiating a price, the museum bought the structure. There was a hole in the roof and many missing boards. The museum held a fundraiser to cover the cost of repairing the building. The roof was fixed, the missing timbers repaired and the blacksmith shop cleaned in 2007, and then everyone waited until Corning’s Community Planning Board approved the zoning.

First the building needed to be supported so it wouldn’t be damaged when it was lifted onto the truck bed. Once the blacksmith shop was on the truck, the building traveled toward Corning. The huge truck transporting the Cooley Blacksmith Shop pulled off W. Pulteney Street onto Flint Ave and into the museum’s parking lot. The men hoisted the structure off the truck and placed the shop onto its present location. Although some tools were original to the building, many families donated additional tools to complete the restoration.

A blacksmith creates metal objects from wrought iron or steel by using tools to bend and cut the metal. A farrier shoes horses. The two professions can be one in the same when a farrier uses blacksmithing techniques to create shoes for a horse. As blacksmithing died out as a profession, many smithy’s turned to farrier work. Cornell University’s Vet School had a long history of training farriers and blacksmiths. Marshall Conklin, a farrier at the Vet School for over 15 years, trained many farriers. He and two of his students, Mike Hutter and Jim Hunter, volunteered to give presentations to the public on blacksmithing at the Cooley Blacksmith Shop.

“Beginning in the spring of 2012, the museum offered lessons in blacksmithing. The classes are small, only 2 students per class. Classes are given from April through November, dependent on the weather. The temperature needs to be between 35 and 40 because there is no heat in the building except for a portable propane heater,” said Leon.

“That sounds interesting,” I replied.

If you come to the Whingblinger Heritage Festival at the museum next week you can see Mike Hutter and Jessica Hadlock demonstrate blacksmithing.”

The following weekend, on September 8th , I made the trip back to Corning and the Benjamin Patterson Inn Museum. The Whingblinger Heritage Festival was in full swing. There was a civil war tent with soldiers, log cabin, donkeys, a bee keeper selling honey and lots of yummy cookies and pasteries for sale as a fundraiser. I stepped into the one room school house where I met Barbara Rhodes, a docent, dressed as a 19th century school teacher. She helped parents work with their children on a number of projects.

From there I walked the short distance to the Cooley Blacksmith Shop. The shop was crowded with many onlookers as Mike Hutter, Jessica Conkling, and Christopher and Benjamin Burns worked pounding and shaping metal.

After the crowd dispersed I took pictures and asked Jessica, “How long have you been doing blacksmithing.”

“I’ve been blacksmithing for 10 years. I was in Leon Golder’s last class and plan to open my own metal arts business,” Jessica replied.

“And how long have you two boys been doing blacksmithing,” I asked.

I left as a light rain fell from the sky. There are not many places where you can witness, up-close, a working blacksmith. Although some farriers use blacksmithing skills to craft horseshoes, most do not. Years ago, I remember our farrier driving to the farm with his small forge built into the back of his truck. It’s nice to know that there are still some blacksmiths working as farriers. If anyone is interested in taking blacksmithing classes call 607-937-5281 and ask for Leon Golder.