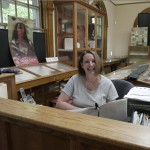 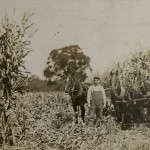 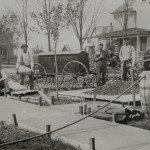 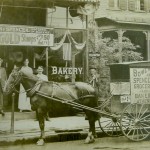 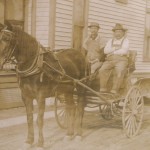 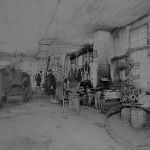 Founded in 1895, the Tioga Point Museum began as a small collection housed at the old Athens Academy. People within the local community donated items to the museum located in the school. In 1897 the Spalding family contracted the architects, Albert Hamilton Kipp and Harry Charles Child, to build a structure in the Colonial Revival style to provide a place for the Spalding Memorial Library and the Tioga Point Museum. The stately brick building with Indiana limestone trim and Ionic order columns was constructed on 1.3 acres, directly across the street from the Athens Academy. The museum moved into its new quarters on the second floor in 1898 and has been there ever since.

The museum’s collection encompasses local history of Athens and Sayre, natural science and archeology. Open Tuesday and Thursday from noon-8 and Saturday from 10:00 to 1:00; closed Thanksgiving, Christmas and New Year’s Day, admittance to the museum is free. The Tioga Point Museum is a fascinating place to spend a few hours on a quiet afternoon, so a few weeks ago I decided to stop by.

Nineteenth century fire engines and the horses that pulled them seemed like an interesting topic for an article and I thought the museum would be a good place to begin my research. I pulled open the huge wooden doors and was greeted by a charismatic woman, Maddie Opalenik, the Assistant Curator at the museum. I handed Maddie my card and explained my blog. She gave the card a quizzical look and said, “I think I’ve been on this website before.”

“We have a wonderful volunteer, Ella Louise Johnson, who works here. She’s a friend of Donna Horton. Ella told me about your adventures with the goat,” she said.

Maddie began working at the Tioga Point Museum 3 years ago, in October of 2009. She fell in love with her job and enjoyed the fascinating people who visited the museum. Three days a week, she helped people explore the museum, lent a hand to scouts seeking merit badges and coordinated museum activities. When I explained that many of my blog articles described events which happened at Ballentine’s Horse Heaven, Maddie immediately said, “I know Johnn and Connie.”

Not only did she know the Ballentines, she had visited the stables, knew the horses, remembered Pepper’s rescue and CJ’s birth. Before Maddie and her husband moved to the Valley permanently, they often stayed at their week-end home in East Smithfield. When she was in town, Maddie bought fresh farm eggs from the Ballentines for her co-workers back home in NJ.

“You know the chickens were stolen,” I said.

“Yes, I went up to the stables one morning to ride and Johnn told me all the chickens were stolen in the middle of the night. Not one feather was left behind,” I said.

“You’re sure an animal didn’t get into the hen house,” Maddie said.

“Nope, there wasn’t any blood or chicken parts, the chickens were just missing,” I replied.

“I’ve never heard of such a thing,” said Maddie.

“Me neither, I guess there is a chicken thief loose in the Valley,” I said.

She thought for a moment, gave me that quizzical look and said, “I’m not sure if we have anything about the fire horses, but there may be some photos with horses in them.”

Maddie pulled from the museum archives several long cardboard boxes. Carefully, she opened each folder and we examined the photos and postcards inside. Sure enough there was a fire engine pulled by horses, several pictures of blacksmith shops, a grocery delivery wagon, and several other interesting photos with horses in downtown Athens. Unfortunately, there wasn’t much information attached to the photographs.

I thanked Maddie, not sure what I would do with the photos. One picture entitled ‘Millard’s Cornfield 1913, Murray farm, West Athens’ looked interesting. Could that be Ballentine’s Horse Heaven? After some inquires the answer came up ‘no’. Even though the road in front of the stables is Murray Creek Road and Murray Creek runs through the property, the stable was never owned by the Murray family.

The photo of the blacksmith shop in downtown Athens looked intriguing. After some research on-line, I discovered a reconstructed, functioning blacksmith shop in Corning, NY. I called the Benjamin Patterson Inn Museum, made an appointment and met Leon Golder. He told me the story of the Cooley Blacksmith Shop. The following week-end, September 8th, I attended the Whingblinger Heritage Festival and saw a live demonstration on blacksmithing. The complete story about the Cooley Blacksmith Shop follow the link.

The photos at the Tioga Point Museum are a bit of a mystery. If anyone knows anything about the photographs, recognizes the people or horses in the pictures or has a story to share please leave a comment. Happy Trails to everyone – stay safe.

This entry was posted in Uncategorized and tagged Tioga Point Museum. Bookmark the permalink.