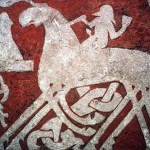 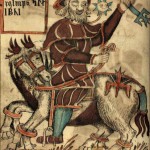 Winter has been long and so far, spring has been cool, except for this week. The weatherman promised temperatures in the 50’s, even 60! As the thermometer climbs, everyone begins to think about the start of ‘horse season’ when the days are warm and long and the riding is easy and fun. During the long winter, I found time to read about horses. One interesting myth I came across contained an eight-legged horse. The first time I read ‘eight-legged’ I thought it might have been a misprint, but no, the horse had eight-legs and his name was Sleipnir.

Of course, you can tell I’m not up on my comic literature or I would have realized that Sleipnir was Odin’s horse. And as everyone knows Odin was Thor’s father. That’s right, Thor, the pagan god of thunder, with the winged helmet and the huge hammer.

It seems that Loki, the trickster god and shape shifter, fathered the eight-legged horse. Loki gave the grey colt to Odin as a gift. According to Comicvine, the remarkable horse grew to over 25 hands high (8’4” at the withers), weighed about 3500 pounds, ran at the speed of light, had human intelligence and could fly. In addition, Sleipnir could travel back and forth to the land of the dead. Truly, this was a remarkable steed. I’m sure that the sight of such an animal would strike fear in the hearts of mortal men and perhaps even the gods themselves. Personally, Sleipnir sounds like just too much horse for me. Can you imagine the time it would take just to clean out his hooves – all eight of them!

It makes you wonder how such an unusual horse arose in the chronicles of the ancient Norse people. David Faux wrote an interesting study based on archeology, culture, history, linguistic, and DNA evidence which theorized that around the 5th Century A.D. a migration of clansmen from the Caucasus and Central Asia settled in Norway and Sweden. These men brought with them a culture based on war faring, shipbuilding and horsemanship. In fact, horses were central to the structure of their society, arts and beliefs. Perhaps, the mythical eight-legged horse was part of the pagan beliefs which these people brought with them to Scandinavia.

Another connection to an eight-legged horse comes from the Gondi people in India. At the funeral of a Muria (distinguished man) a funeral dirge is sung which contains the following verse:

The verse is really a riddle: What horse is this? The answer to the riddle: The horse of Bagri Maro, in reality, is a funeral precession. The four men carrying the casket provide the four heads and eight legs referred to in the song.

It has been a long winter. Maybe winter seeds the imagination; bringing forth remarkable stories to entertain us as the dark, dismal days march past. However now that spring has finally come, I hope to spend more time outside riding and discovering some new trails through the Endless Mountains.

Happy trails to everyone!