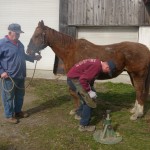 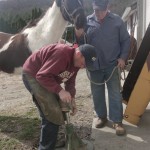 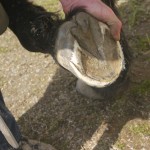 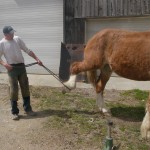 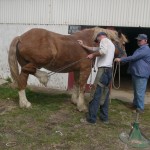 There are several farriers who come to Ballentine’s Horse Heaven. Gene Fletcher for several years was a regular. He trimmed Pepper, CJ, Jupiter, Sam and Myrtle. Unfortunately, Gene retired due to health reasons. A career as a farrier can be short or long but it is always dangerous. A farrier works on many different types of horses, some better trained than others to pick up their feet. Danger is always close at hand from a horse that easily spooks to one that kicks or bites. The farrier can be knocked over, stepped on, struck by the horse’s hoof, bite on back, neck or head; all resulting in serious injury. Besides the risk of being physically knocked over and walked on, the farrier spends long hours bent over which puts a strain on his spinal cord and joints. Truly being a farrier is not a career for the faint of heart.

Gene recommended Dean Krissler as a replacement, so Connie called him up and scheduled an appointment. Before long Dean was a regular at the stables.

Dean studied to be a farrier with John Jaros at the New England School of Horseshoeing at Tufts University, and completed the program in 1996. Then, he apprenticed to another farrier; shoeing hunt, dressage and show horses for ten years where he lived near Hyde Park and Millbrook, NY. About four years ago, he moved to a ranch a few miles from the Ballentine’s, and for the last two years has been building his farrier business.

In the early morning a couple of weeks ago, Dean turned his truck into the driveway in front of the barn. He took out his tools and Johnn brought out the horses for their trim, one at a time as I watched from the sidelines. Last time Dean came, he told Johnn that CJ had some hoof cracks which needed attention. For the past few weeks, I put a sealer on the outside of the hoof to lessen the cracking and wanted to know if it had helped.

“What causes the cracks?” I asked Dean.

“The cracks can be caused by a number of things. These are mostly due to the winter weather we’ve been having. The constant thawing and then refreezing sucks moisture out of the hoof and causes cracking, mud also dries out the hoof and causes them to crack,” he replied.

Dean trimmed Pepper’s front hoof and continued, “When the horse steps on uneven frozen ground or a rock, the hoof can crack. Pepper has a quarter crack which I’ll trim and bevel to take the pressure off the crack. That will allow the hoof to grow out without further cracking.”

“So is that the only way to get rid of the crack?” I asked.

“Trimming won’t get rid of the crack, it will reduce pressure. Basically, the hoof has to grow out. The main problem with cracks is that they can lengthen. If the crack reaches the coronary band at the top of the hoof, then you have a real problem.”

“I’ve been putting on a hoof sealant for a few weeks now. Do you think that helps?” I asked.

“The sealant helps, in between applications put on some type of hoof oil. There are a lot on the market. The products you purchase are the best oils to use since they have been tested. Although some people say they have gotten great results with used motor oil, even just baby oil.”

“I heard that you shouldn’t use any petroleum based products on the hoof.”

“That’s true but once motor oil turns black by being burned in the engine there isn’t any petroleum left and its okay to put it on the hoof. You can use a paint brush to apply the oil; just cut off the end and leave about an inch. Another thing to avoid is any product which has alcohol in it. Alcohol will also dry out the hoof.” he said returning Peppers foot to the ground. “If you really want the hooves to grow out fast feed them Biotin. Nutrition is also an important part of hoof care.”

Johnn led one horse after another in and out of the barn for their trim. CJ came out and stood in the sun while Dean trimmed the horse’s hoof.

“Do you think he’s having a hard time with the cracks because he has white hooves?” I asked.

“No, white hoof, black hoof it doesn’t matter. Some people say white hooves are softer, but I think its just because you can see the cracks better on a white hoof verses a black one.”

After the last riding horse was trimmed, we moved out of the sun and back into the barn. The two Belgium draft horses waited in their stalls to have their feet worked on. Myrtle and Sam stood like mighty giants as we approached. As a rule, Dean doesn’t work on draft horses, but he made an exception as a favor to Johnn.

Originally bred by farmers, the Belgian horse is still used in agriculture to pull plows and wagons. They are one of the strongest breeds among the draft horses. The Belgian horse weighs approximately 2,000 pounds, compared to a riding horse which weighs in at around 1200 pounds. The average Belgian horse can pull a load of up to 8,000 pounds and work eight to ten hours a day. Their hoof is enormous and presents a difficult job for any farrier.

I looked at Dean’s shoes and asked, “Do you wear steal toed shoes when you work around horses?”

They explained to me that a steel toed shoe or boot is dangerous around horses, especially really big draft horses. If the horse should step on the farrier’s foot, the steel in the toe would be crushed and literally cut off the man’s toes. The boot itself would probably be cut off in the hospital and the toes, no longer attached to their owner, would simply be poured out of the boot.

Rings are another safety issue for the farrier. A farrier never wears a ring because if a horse acts up, jumps or startles when shod, the nail can get caught under the ring causing a serious injury. Several months ago, Karen told me her jumping instructors forbid students from wearing a ring. I was beginning to understand why.

Dean began to trim Myrtle until she decided she’d had enough and reared back. Johnn and Dean calmed the horse and the farrier finished up trimming her hooves. Then it was Sam’s turn. Everything went pretty well until Sam refused to pick up his back leg and powerfully stomped down his hoof.

“I usually don’t work on draft horses. Draft horses have their own farriers,” he said.

“How is it different?” I asked.

Every time Dean tried to pick up Sam’s back leg, the horse refused and stomped down his hoof hard to the ground. Dean decided to take Sam outside where he had more room to work on the horse. He took a lead rope and slipped it around the horse’s pastern, then pulled the rope back lifting the horse’s leg. The tricky part was grabbing the hoof which Sam did not want to have happen. It took awhile, but finally Dean was able to trim the hoof.

Truly, a farrier’s job is a difficult and dangerous one. Dean packed up his tools and headed home.

This entry was posted in Uncategorized and tagged Dean Krissler, farrier. Bookmark the permalink.