Desensitizing Horse to Blanket with TTouch 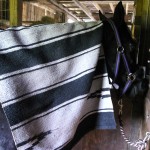 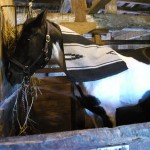 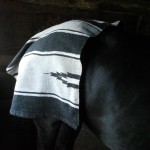 The stable was quiet in the early morning. The weather had been rainy and cold. I found Johnn in his office or doing chores. Since there wasn’t anyone to ride with, I decided to work on CJ and Pepper’s behavior. The task was improving their ground manners during grooming and tacking up.

Usually when I was getting ready to ride with someone else, I hurried. If the horse had an attitude while tacking up, I often ignored it and moved quickly through the task. After all, someone waited to ride with me and I didn’t want to hold that person up. The same with the mounting block, I often just swung onto and rode off. After awhile the horse anticipated this and everything became a routine; including the bad habits of not wanting to pick up hooves, ears pinned and tail swishing while saddling and moving off as soon as my foot hit the stirrup. These little bad habits were annoying and potentially dangerous.

I agreed with the philosophy that whenever you rode or handled a horse you trained the horse. Horses are very smart and fall into repetitive patterns of behavior. Once you have established a routine it takes some time to establish another. CJ and Pepper never liked having the blanket put on their back. Both horses pinned their ears, exhibited a lot of tail swishing and sometimes even attempted to bite you. Once the blanket was up, better not move it around or try to straighten it. If you did, they would become hostile. So my first task was to desensitize the horses to the blanket.

By far, Pepper was better than CJ at tacking up. If you were fast and didn’t pay attention to the horse when putting the blanket and saddle on you probably wouldn’t notice that she didn’t like it. CJ’s training on the other hand was a work in progress.

In the early morning, Pepper stood tied to a hitch in her stall. I draped a Navajo western saddle blanket, 32” by 64”, on her neck, and then I ran my hand under the blanket and whispered to her “Good girl.” At one point, Pepper pinned her ears and gave me a nasty look. I reacted by softly taking hold of her halter and said, “Stop it.” I continued, taking the blanket off her neck and placing it on her back and then on her hindquarters. I repeated everything on the other side of the horse paying close attention to her attitude. Any pinned ears, tail swishing, or movement towards me I reprimanded with a gentle tug on the halter and a stern “Stop it.” I folded the blanket down the middle, placed it on Pepper’s back, straightened it and ran my hand under the blanket. I stood next to her and shook the blanket. After a few days, Pepper didn’t mind the blanket or the saddle. I unhitched Pepper allowing her more freedom and did the same blanket exercise with her. She still didn’t mind the blanket.

I executed the same routine with CJ. He improved too, but much slower and needed a lot more work. As I worked with the horses, I realized that they both had several “touchy” areas. Perhaps the horses were ticklish or just sensitive. How was I to get CJ and Pepper to allow me to run my hand across those ticklish areas? On-line I stumbled across an article on the TTouch method designed to relax the horse. I decided to give it a try.

The TTouch method was developed in the 1970’s by Linda Tellington-Jones as a way to communicate, train and heal horses. The massage technique used the tips of the fingers and side of the hand with the thumb placed about 2 to 3 inches from the forefinger. The hand was slightly cupped. The horse was massaged using a circular motion usually clockwise; however, I found counterclockwise worked too. Either work in parallel lines or randomly. There are several levels of pressure which you can apply. I watched Pepper and CJ’s reaction to see what worked best.

The TTouch massage worked well; however, Pepper didn’t want me to massage an area on her belly between the elbow and the flank not far from the girth. I tried simply running my hand lightly and quickly across this area before she had time to negatively react to the movement. I spoke in a whisper with a soothing voice. Gradually, she allowed my hand to stay longer, and eventually, I was able to use TTouch. As for CJ, he had major issues with being touched. He didn’t like the slightest pressure on his belly, girth, flank, croup, breast or back near the withers. I stopped using a stiff brush, and used only my hand in the ticklish areas. CJ improved too but he needed much more time and work before he would get to Pepper’s level of acceptance.

After I brushed the horses and used TTouch, I braided the horse’s mane. To my surprise, CJ and Pepper loved having their manes braided. They lowered their head’s; half closed their eyes and totally relaxed. There are many fancy ways to braid a horse’s mane. I picked the style which I used for braiding my own hair when I was a kid. As well as relaxing the horse, the braided mane helps to keep the animal cooler in hot weather.

Each morning, by the time I left the barn, the sun had risen into the late morning sky. I drove away, winding down Murray Creek Road towards 220. At the Dandy Mini Market, I turned left and headed home. The next morning, I’d be up early again to repeat the same routine until saddling Pepper and CJ was a leisurely activity rather than an ordeal.

This entry was posted in Uncategorized and tagged bad habits, re-training a horse, TTouch. Bookmark the permalink.