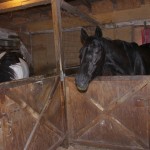 Pepper in her stall at Ballentine’s Horse Heaven 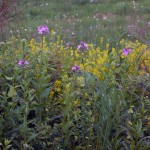 Flowers along the road 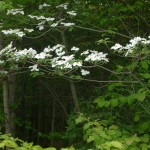 Entrance to the woods

The stables have been quiet for the last few weeks. Karen stopped leasing Jupiter, Donna moved her horse, Socks, to another stables, Anne sent her horse, Shadow, for training, Emma left for an internship in Kentucky and I found myself without any riding buddies. To compound the feeling of melancholy, the weather for May has been cold, with a few nights dipping down to the 30’s and even dropping into the 20’s. Although, it has been cool, the countryside bloomed. The blossoms lasted longer than usual, the flowers more profuse and the colors dazzled the eye. The migratory birds returned; blue birds, redwing blackbirds, and gold finches fluttered among the branches adding music to the landscape.

Every morning I was up early and headed for the stables to work on CJ and Pepper’s hooves. Dean Krissler told me that the horse’s hooves were soft due to weather conditions and pasture mud. It seems that every spring it is the same old story: soft and dried out hooves. It was time to toughen them up again for riding. A couple of years ago, Gene Fletcher told me how to toughen a barefoot horse’s hooves. I followed his directions by using bleach diluted with water (50/50) and then applying Venice Turpentine to the horse’s sole avoiding the frog, making sure to clean the sole of bacteria and dirt. Not only did it harden the hoof it also eliminated Thrush.

For the outside of the hoof, I tried applying used motor oil in-between applications of a hoof sealant. However, after reading that used motor oil contained carcinogenic, toxic metals such as benzene, lead, arsenic, zinc and cadmium, I chose to go back to using Shur Hoof also recommended by Gene Fletcher. I decided to use rubber gloves just in case any of the ingredients in the hoof applications might be harmful to my health.

I’m not the fastest at applying this treatment. It took me about two hours to clean and treat the hooves, brush down the horses and then saddle up. One morning, much like all the other mornings, I tacked up Pepper and headed for the park. It was Turkey season in Pennsylvania so I made sure I had on a florescent orange vest. The Pennsylvania Game Commission advised people entering the woods during Turkey season to dress safe: Never wear red, white, blue or black clothing as these are the colors found on mature gobblers.

The park was very quiet except for singing song birds, keenly focused on mating and nest building. I headed into the woods, following a short trail which climbed a steep ravine. At one point I stopped Pepper; a large branch knocked down by a recent storm blocked our way. Carefully, we made our own path through the pine forest, weaving through trees and underbrush until we came to the trail on the other side of the fallen branch. The trees filtered the morning light. The trail, dimly lit, was a rich brown as it zigzagged through the trees, twisting and turning out of sight.

We turned a bend in the trail and Pepper slowed down, almost tiptoeing forward until she came to a complete stop. She stretched out her neck, pricked her ears forward and stared at two dark metal objects stuck in the dirt alongside the trail. The objects were round and very flat, suspended on long metal legs with tiny heads attached to thin floppy metal necks.

‘What the heck are they?’ I asked myself.

Pepper turned her head away from the metal decoys and stared across the trail at a huge evergreen tree shrouded in shadow. She refused to move, but stared and then suddenly snorted. At first I didn’t see anything, and then out of the shadow came the shape of a man. He sat motionless, dressed in camouflage, even his headgear blended seamlessly into the woodlands. Only his forehead, eyes and mouth were visible. He kneeled immobile as if in deep meditation while his powerful rifle neatly rested against the massive tree trunk.

Feeling like an intruder who had stupidly stumbled into a hunter’s trap, I whispered, “I didn’t realize you were here …sorry.”

“That’s ok,” he whispered back.

Pepper quietly walked by the decoys and down the path. Finally, the trail exited the woods near the pond. Sunlight reflected off the cool blue waters of the fishpond and mating birds sang louder than ever as we headed through the park on the gravel road towards home. As Pepper walked in the bright sunlight I thought, ‘I wonder if its going to rain tomorrow?’