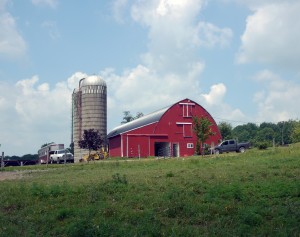 Sunshine hit the truck’s windshield as Anne negotiated the turns on Sayre Hill Road. The truck made a sharp turn and roared down the country road headed for Shadow’s new home. Overhanging trees momentarily blocked the sun until finally the vehicle crested the hill. Suddenly, the countryside turned into broad fields and pastures flowing with grass destined to be cut for hay. Before long, Anne turned the truck onto a long gravel driveway leading to a huge barn which once housed dairy cows. She parked alongside the red barn and we climbed out of the truck. 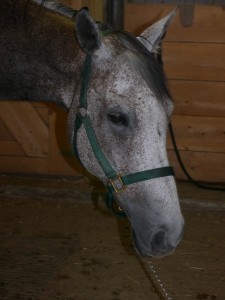 “Dawn’s working with Shadow in the round-pen. We can walk over and see how the training is going,” said Anne walking up a slight incline away from the barn.

We came to the round-pen where a horse trailer stood at one end of the large enclosure. Shadow stood next to the trailer and a young woman held his lead rope.

“How long have you been training horses?” I asked.

“My mother owned a riding stables and when I was about 13 years old people saw how I handled horses and asked if I would work with theirs. That’s when I started training horses,” Dawn replied.

“He probably felt claustrophobic. When we tried to load him at his old stable I wondered what I had gotten myself into, but he’s doing really well now,” replied Dawn.

“It took us hours to load Shadow at Ballentine’s, for awhile I didn’t think he would get in the trailer or would damage it,” said Anne.

“He really is doing great,” I said. 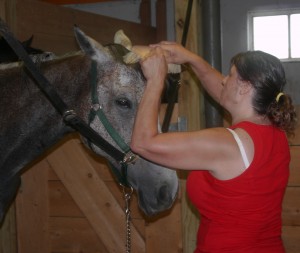 Dawn led Shadow out of the round-pen and headed for the barn and his stall. In the distance, water sparkled as sunlight bounced off a pond in one of the many pastures which surrounded the barn. In the middle of a large field a solitary cow stood grazing. Except for the tweeting of a few isolated birds, the countryside remained peaceful and quiet. The gravel road which paralleled the electric fence bordering the property was empty, no car or truck rumbled by. A slight breeze washed over us as we made our way to Shadow’s stall.

The barn had a single runway down the middle with exits on both ends and held many stalls. Each stall was a large and spacious box. At one entrance to the barn hung a hose for washing horses, cross-ties and a door which led to a tack room. At the other end of the barn, a chute and entryway allowed horses coming in from the pasture safe passage. 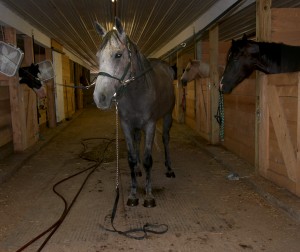 Dawn returned Shadow to his stall and then walked through the barn to let in horses waiting to be feed. One by one the animals entered the barn and found their respective stalls, hay and grain.

“So how is Shadow doing with his cow problem?” I asked.

“Good, it took him a few days to get used to the cow. The other horse, Barry, pastured with him offered a buffer for awhile, but now Shadow’s good with the cow,” Anne replied.

“I can’t believe that, he always got so nervous or bolted whenever we rode past a cow pasture or he heard a cow mooing.”

“I know, but the other day I rode past a dairy farm up the street and the cows didn’t bother him at all.”

So Shadow’s training went well. He learned to live with a cow, get on and off a trailer without fear and generally calm down. Shadow had new friends; a cow and a Standardbred named Barry. He looked far different from the excitable creature which once ran with raised tail, in the pasture at Ballentine’s Horse Heaven. 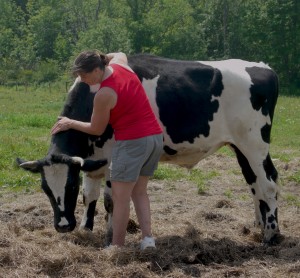 The pleasant June and July days passed by as Ann and Shadow settled into the new home. Dawn Bellis became an important part of their lives. Other people often joined Shadow and Anne for rides down the many dirt roads and trails which cut through the woods surrounding the stables. There will be many more long summer days for the horsewomen to enjoy.

This entry was posted in Uncategorized and tagged horse training, horseback riding. Bookmark the permalink.