Horses in the Valley Halloween Parade 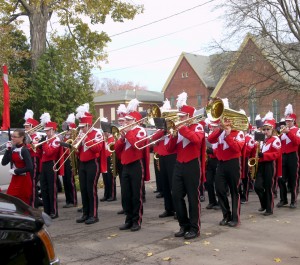 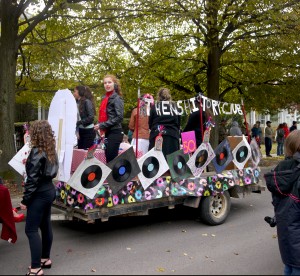 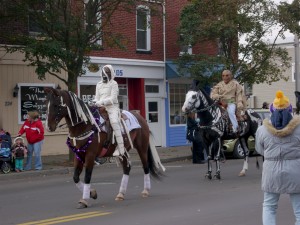 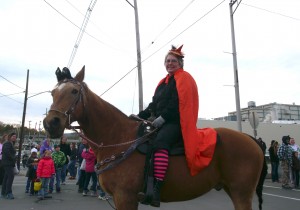 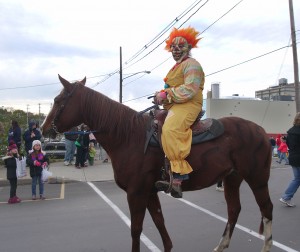 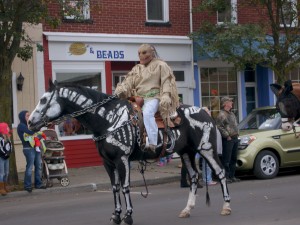 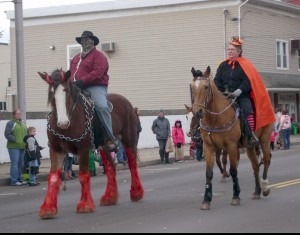 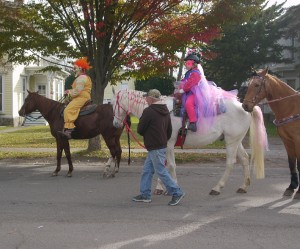 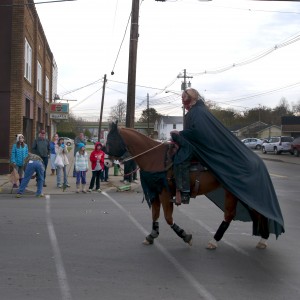 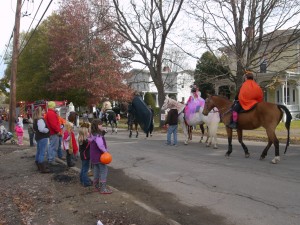 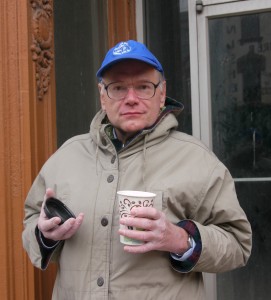 Every year one of the three Valley municipalities, Athens, Sayre or Waverly, host a Halloween Parade. This year it was Waverly’s turn to have the parade. Friends and neighbors left the warmth of their homes to stand out in the cold for about an hour on Saturday morning. They watched marching bands, floats filled with people dressed in ghoulish costumes, local fire and rescue vehicles, and last but not least costumed horses and riders.

A morning haze hid the sun and created a chill which required a jacket. There was excitement in the air which can only be created by a large crowd. I hurried towards Broad Street and knew I was late. The sound of the trumpets, French horns and drums of several marching bands floated on the wind towards me. When I reached Muldoon Park, to my surprise, I saw the parade. The Waverly Senior Band turned the corner at Park and Pennsylvania Avenue and headed straight towards me. What luck! I walked across the park and watched the parade slowly unfold before my eyes, but there wasn’t a horse in sight.

I came to see the horses and knew from my own days of riding in parades that the horses would be at the end. After all, nobody wants to step in horse poop or risk getting kicked. I walked down Pennsylvania Avenue, turned the corner at Broad Street and headed towards Ted Clarks Busy Market. Parents and kids hugged the curb as they watched the parade flow by. The people on floats and in fire engines threw wrapped candy to the crowd lining the street. Kids scurried to pick up the tossed candy and stuffed the treats into their bags.

As I drew near the center of town, the end of the parade came into view and a group of horseback riders. I walked closer, took a few pictures and realized the riders were from Rising Hope Farm. I heard a friendly voice say “Pat”. I looked up and saw Lou Anne Miller on her horse Wildfire, old friends, from my days at Windy Ridge Stables.

I followed the riders back towards Muldoon Park where I had started. On my way, I bumped into my neighbor, Bill, who was enjoying a coffee and the parade. Perhaps, that is what parades in small towns are all about. They give people a chance to come together, chat; enjoy a common event while reconnecting with community. I hurried on to catch up with the riders and by the time the horses reached Muldoon Park, I had come full circle.

Lou Anne and the other riders headed for their horse trailers and the drive back home. Various elements of the parade diverged as the on-lookers went their separate ways. The electric sensation the crowd created, faded as if instantly evaporated by some unknown force. Although the parade was over, the stage was set for this coming Thursday, October 31st. Halloween night, when ghoulish pleasure will ignite the darkness with excitement and of course candy.

This entry was posted in Uncategorized and tagged Horses in costumes, Parade Horses, Waverly Halloween Parade. Bookmark the permalink.