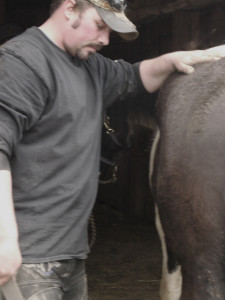 A gray haze clouded the sky restraining the early April morning. A slight chill clung to the shadows but spring definitely hung in the air. When I pulled in front of the stables Kenny’s truck was already there. I walked through the barn and found Johnn and Kenny in Myrtle’s stall. The draft horse had one leg lifted as Kenny finished off filing the hoof.

Kenny in some ways was new to being a farrier having just graduated from Oklahoma State Farrier School in September. In other ways, being a farrier seemed only natural since he was the son of a farrier. At Oklahoma State, Kenny completed the 6 week course; a hands on experience with some lecture/class time. The class was small, only 12 students. Every day he worked with different horses, solved different problems.

“Why did you decide to become a farrier,” I asked Kenny. 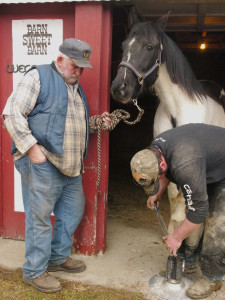 “I always wanted to be a farrier, but I didn’t want to compete or interfere with my father’s business. When he passed away I decided to go to school.”

“So you’ve been around horses all of your life?”

“I grew up with horses, did all the kid stuff, shows, roping competitions, trail riding, team penning. I still do local rodeos. My wife, Dawn, does barrel racing. We run a family stables with 18 boarders.”

“That must keep you busy.”

“It does. We also have a 2 year old son. He has a mini-horse which he loves to brush, but as soon as we put him on the horse he cries. If we put him on a bigger horse he’s fine. So when we go to shows, our son rides the big horse in lead line classes.” 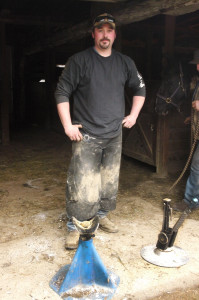 He finished trimming Sam and Myrtle; although draft horses, the two are trimmed without use of a stock. Stocks aren’t’ always fail-proof. After Kenny graduated from farrier school, he was hired by a farrier who had been injured by a Clydesdale. The horse was in a stock when the animal panicked, broke the stock and the farrier’s leg. Kenny was hired by the farrier, and for several weeks, Kenny rode around with the injuried man. He picked up some useful pointers as he trimmed and shoed horses for the other farrier.

“I’m careful when I go out to the pasture to get CJ or Pepper. I’m always aware of the draft horses, especial Myrtle, since she’s very attached to Pepper. Myrtle’s a big horse and sometimes runs after us and likes to kick up her heels.”

“It’s good to be careful. A draft horse is like a mule. A riding horse usually won’t run you over, but they will. Mules and draft horses aren’t animals to mess with or take lightly,” replied Kenny.

Kenny moved on to the riding horses, Jupiter, CJ and Pepper. Each horse in turn received a trim; no shoes today. Kenny lifted CJ’s hoof, did his job, everything went like clockwork.

“What are some of the challenges you find being a farrier?”

Before long the horses had all received their trims and waited to be returned to the pasture. I turned my car towards home as Kenny gathered his tools, climbed in his truck and headed for another job.