The world in 1962 proved turbulent, dangerous, filled with espionage, closed door politics and intrigue. The Cold War fought between the principle players the US and USSR; raged across the globe pulling smaller nations into their sphere of influence. The volatile year hosted an Atomic Bomb tested in outer space in July, the Cuban Missile crisis in October, John Glen orbited the Earth in February. Pilot Gary Powers, who secretly left a Pakistan air field and was shot down over the Soviet Union in 1960, was exchanged for Soviet spy Rudolf Abel in February. In March, Jacqueline Kennedy and her sister visited Pakistan. They attended the Ninth Annual Pakistani Horse and Cattle Show at Fortress Stadium in Lahore, Punjab. During her visit, Mrs. Kennedy was given a horse named Sardar. The horse, the descendent of champions, was breed in the famed Aga Khan stables. Jackie renamed the horse Black Jack after her father “Black” Jack Bouvier. 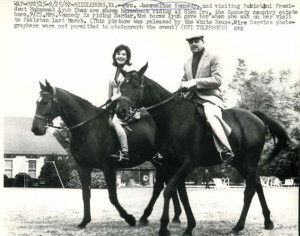 A military transport brought Black Jack to his new home; a stable at Glen Ora an estate in Middleburg Virginia about an hour’s drive from the White House. Jackie, an equestrian since childhood, treasured riding her new horse in the quiet countryside. President Ayub Khan on a diplomatic visit to the US stayed at the estate with the Kennedys and was photographed riding with Jackie. 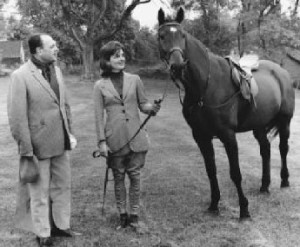 By law, gifts from a foreign country to the President or a member of his family are accepted on behalf of the United States. Such a gift becomes the property of the nation and may not be kept as a personal gift.

Jackie Kennedy received many gifts during her trip to Pakistan, gold necklaces, two tiger cubs and a horse. According to White House Press Secretary Pierre Salinger all the gifts were handed over to the State Department except one; Black Jack. Supposedly, an arrangement was made to allow the First Lady to keep the horse with the stipulation that she pay 7 ½ % of the horse’s value; a type of tax. 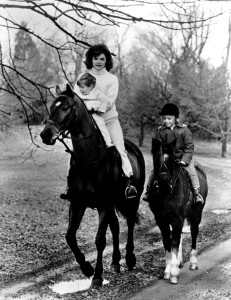 Events on November 22, 1963 turned Jackie’s world upside down. That Friday her husband, President Kennedy, died; brutally assassinated by a sniper in Dallas, Texas. The President’s body was placed in the East Room of the White House for 24 hours. Sunday his flag-draped coffin, carried by a horse-drawn caisson, traveled to the Rotunda of the US Capitol. More than a quarter of a million mourners paid their respects to the fallen President. On Monday, November 25th after Requiem Mass at St. Matthew’s Cathedral, the body was taken to Arlington National Cemetery for burial. 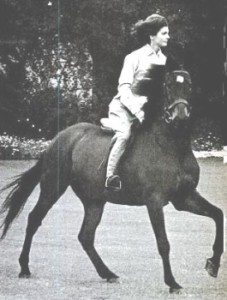 The military officials in charge of the funeral followed strict protocol; however, Jackie, if a precedent could be found for her request, was allowed to orchestrate the funeral by adding her own personal touch. In 1865, Abraham Lincoln had a caparisoned horse at his funeral. His horse, Old Bob, rider-less with riding boots lodged backwards in the stirrups, draped in black, was led behind the procession. In the same manner, Jackie may have requested her horse Black Jack be used as the caparisoned horse. After all the horse, a gift from Pakistan to the US, had become part of the Kennedy family.

Here is where my research into this story goes wonky. On Sunday, November 24 a member of the Associated Press called Jackie’s press secretary, Pamela Turnure, to confirm that the horse in the procession to the Capital was Jackie’s horse. Turnure replied yes, the horse was Mrs. Kennedy’s Black Jack. However, the next day, the day of the burial, Ms. Turnure recanted and said “I was wrong.” Pierre Salinger also stated to the press that the horse, Black Jack, belonged to the Army. 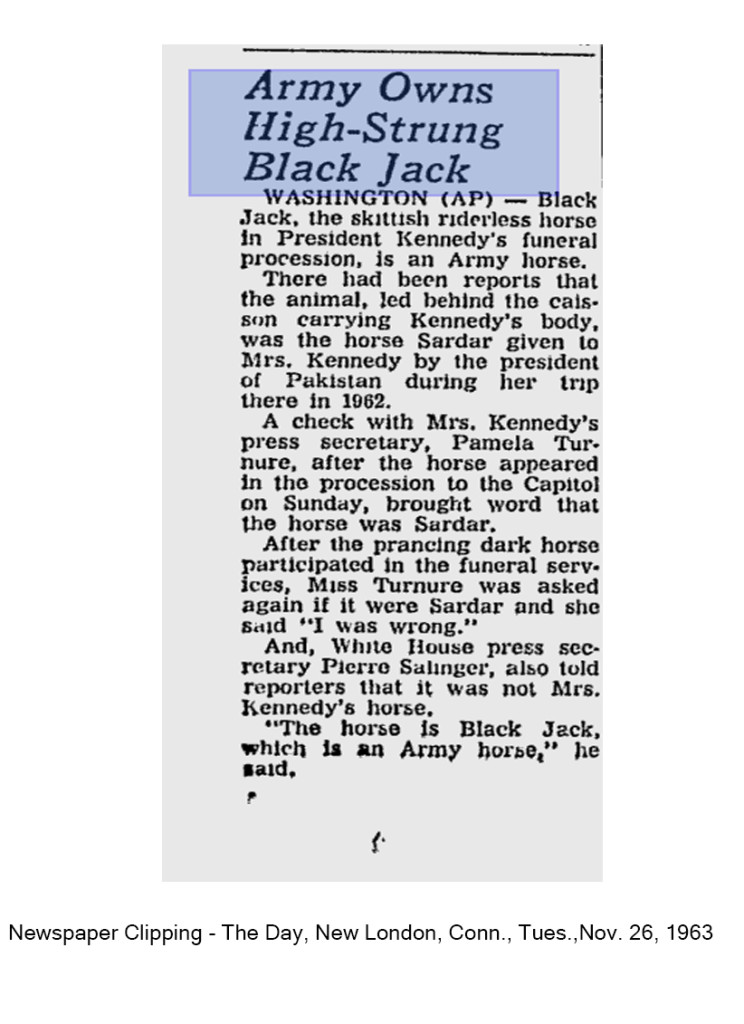 Now here is where everything gets very odd. On November 27, Jackie contacted the Secretary of the Army, Cyrus Vance, and stated that she wanted to buy Black Jack the caparisoned horse. It’s unclear what she was told but obviously the answer was no. Shortly after her request, Black Jack’s caparison, which included his saddle, bridle, saddle blanket, sword, boots and spurs were delivered to Jackie at the White House. All of this happened two days after her husband’s funeral in the midst of packing, taking care of her children and organizing her possessions in order to leave the White House within two weeks. If the horse wasn’t Jackie’s Black Jack why did she want to purchase the animal? A horse she had only seen for a few hours during the funeral procession.

So now I’m left with more questions than answers. Was there a legal issue to ownership or a question of national security? In any case here is where the “Sardar – Black Jack” story ends. I couldn’t find any other reference to the horse or what happened to the beautiful creature. It is as if the animal just disappeared into thin air.

My father always said, “There are two sides to every story.” The other side of this story is the tale of “Black Jack the Army Caparisoned Horse” which will be my next blog. Until then, Happy trails to all of my readers.