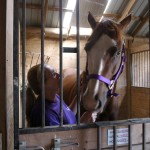 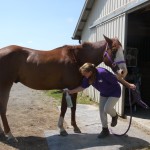 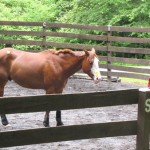 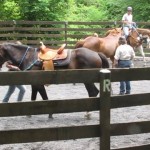 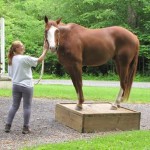 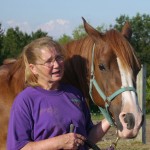 People sell or give horses away for a variety of reasons, a child outgrows a pony, a young adult leaves for college, illness strikes , financial problems loom, the family moves out of town, a need to make a profit, but sometimes a horse and owner come to a turning point in their relationship. The horse and owner no longer connect. The horse owner realizes that a hard decision must be made; work with the horse or sell. That was the position Georgia found herself in.

I met Georgia in the spring of 2007 when my daughter and I decided to take English Hunt lessons at Windy Ridge Stables with Veda Tupy. Georgia boarded her horse, Whiskey, at the stables and took lessons once a week. Whiskey, a Quarter Horse gelding, and Georgia were always together in the arena practicing or just hanging out. After I left Windy Ridge and moved to Ballentine’s Horse Heaven, I didn’t see Georgia very often. A few days ago, I bumped into Georgia at the store.

“I’m selling him,” she replied.

I did a double take and said, “I can’t believe it! You’re parting with Whiskey.”

“I know. I didn’t think I’d ever sell him. I thought he was my forever horse, but I came to the realization that things just weren’t working out. It was a hard decision to make, but yes, Whiskey’s for sale. I just bought another horse and can’t afford to board two horses,” she replied in a serene voice filled with determination.

“What happened?” I asked still unable to believe what I was hearing.

“It’s a long story. I’ve been having problems with him for the last two years when Whiskey became the alpha horse in the pasture. To compound the problem, about seven months ago I had a medical emergency. The doctor demanded I stop riding horses for at least six months. Due to the medical problem, I couldn’t spend a lot of time with Whiskey. Meanwhile, he became more distant and obstinate. When I resumed riding, I rode Whiskey for lessons every other week. He acted up and tested me all the time. He would take the bit in his mouth and buck. I didn’t feel at ease on him. That’s when I decided to take Whiskey to Kathy Huggins horse clinic in Millville, PA, to work through the problems I was having and regain the bond we had lost,” she said.

“That sounds like a good idea,” I replied. “I have a riding friend who took her horse to a clinic and said she learned a lot.”

Georgia attended Kathy Huggins’s horse clinic the second week in June for 5 days. Kathy ran the clinic at Cedar Creek Training Stables in Millville, PA and was certified by John Lyons. There are several nationally known trainers, Monty Roberts, Pat Parelli, Clinton Anderson and John Lyons to name a few, who run clinics, workshops, sell tapes and books on how to train a horse through the “partnership” method. They all use techniques which when I was younger were called ‘gentling a horse’. Gentling or connecting with the horse in a psychological way was the opposite of ‘breaking a horse’. Breaking a horse was an old cowboy method which basically was get on, hope for the best and if nothing else bully the horse rodeo style into submission. Gentling a horse was viewed as a more humane method which resulted in a calm, well trained animal.

Georgia drove down to Millville and met two women taking the training program with her. They were working on becoming certified trainers. Georgia was at the clinic to build her confidence and learn how to handle Whiskey. The clinic taught the riders how to work with horses through classroom lectures and hands on training exercises. Kathy’s method was designed to train the rider to handle his/her own horse.

The group worked on a variety of exercises with their horses. One exercise was getting the horse to drop his head by gently putting a little pressure on the lead rope then releasing the pressure as soon as the horse lowered his head. Another exercise required the horse to quietly walk into a trailer by using slight taps from a lunge whip until the horse entered. Several other trials were performed; the horses walked over a see-saw board, crossed a stream and stood on a raised wooden platform. They put dots on the horse’s shoulders, nose, and hips to show pressure points used to move the horse in various directions on command. To experience a trailer ride from the horses viewpoint; the women rode inside a horse trailer. Unable to balance themselves with their hands while the trailer rocked back and forth gave them a good picture of what the horse was experiencing.

On the first day of the clinic, Whiskey and Georgia walked past a series of poles set up in the arena. Georgia reined Whiskey to the left but the horse wanted to go right; when he couldn’t Whiskey started to buck. Georgia landed on the hard ground hitting one of the poles. He performed badly a second time after Georgia unloaded him from a horse trailer. He pulled the lead rope out of Georgia’s hand and reared straight up. Whiskey kept testing and pushing Georgia during the clinic.

As the days progressed, Kathy began to see problems between Whiskey and Georgia. Kathy told Georgia that she had to make a decision. Did she want to work with Whiskey for the next 10 years until she could maybe get him to where she wanted him or sell Whiskey and purchase a calmer horse? You can work with Whiskey to reduce his testing but it won’t be much fun. The horse and rider’s personalities need to match. The rider needs to be comfortable with the horse and the horse needs to trust in the decisions made by the rider, otherwise there will be trouble.

Kathy gave Georgia an email address of a woman in Lockport who a few months ago had to make the same hard decision. Georgia and the woman emailed back and forth about their horses. The woman’s horse, Denver, didn’t like other people or horses. One day, the woman was brushing Denver in his stall when her husband brought another horse into the barn. They walked by the stall where she was working with Denver. The horse spooked and broke the woman’s leg. Her husband told her Denver had to go. He was too dangerous. The woman bought another horse. One day, she was riding her new horse when the horse stopped and started moving her hooves very fast in place. The woman dismounted and found that the horse had been stung many times by bees on the belly. Even though her new horse had been stung, the mare didn’t bolt or buck. The woman was happy with her decision and felt she had found a much better horse than the one that broke her leg.

The clinic taught Georgia a lot about horses and herself. She didn’t get the results she was hoping for with Whiskey. She didn’t get a way to work with him but she found out that sometimes it’s ok to walk away from a situation that isn’t going to get any better. As Georgia drove towards home, she realized Kathy made sense. The practical thing to do was sell Whiskey and get a gentler horse. It wasn’t the reason Georgia went to the clinic, but she realized that Whiskey was no longer a good match for her. At this point she had lost her confidence, and was scared to get on Whiskey. It was too stressful to ride the horse. She learned that Whiskey was what trainers call a sporadic bucker – a horse that occasionally bucks when he doesn’t get his own way. Whiskey needed a more assertive rider, one that would keep him on task. Georgia did not see herself as that type of rider; nor did she constantly want to struggle with the horse.

Kathy promised to help Georgia find a new horse. Shortly after Georgia returned home, she saw a mare on Craigslist. The horse was in Big Flats, not far from where she lived. Georgia made the decision to see the horse by herself. This time when she purchased a horse, she wanted to evaluate it without anyone influencing her. If she liked the horse, then she would ask other people to check out the animal.

Georgia liked what she saw. Kathy made the trip from Millville to look over the horse. The horse was owned by a little 9 year old girl. The parents were selling the horse because their daughter had lost interest in riding; although, she enjoyed going down to the barn to braid the horse’s mane. Kathy put the mounting block under the horse and the mare bumped into it but wasn’t spooked. She rode the horse and found the horse quiet and responsive. Kathy felt the little sorrel mare was a trust worthy animal; one Georgia could work with.

Georgia bought the horse and named her Hannah. The new horse was an eight year old, Quarter horse/Arab mix, 14.2 hands high. A few days later, they loaded Hannah into a trailer and headed back to Windy Ridge. When the little girl saw her horse leaving, she became very sad and ran into the house crying. It’s hard giving up a horse. Now Georgia had that same hard decision to make. She couldn’t afford two horses; Whiskey must be sold.

Whiskey needed a new home. The Windy Ridge stables wouldn’t purchase him because he couldn’t be used for jumping and his sporadic bucking made him a poor candidate for a lesson horse. What will happen to Whiskey is unclear. Georgia fears that he could go to slaughter if the right person doesn’t buy him; she wants Whiskey to go to a good home. She looked at the alternatives; find him a home with a more assertive rider, give him away to a good home, take him to auction or an equine rescue facility. In the short term, Whiskey was taken out of the pasture with the other geldings and has a miniature donkey for a companion. The sun still shines at Windy Ridge but Whiskey’s days there are numbered.

2 Responses to The Horse Clinic and Georgia’s Hard Decision