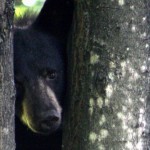 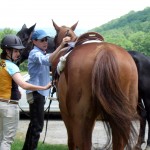 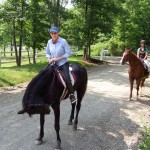 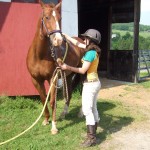 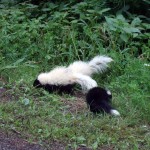 The first week in June, Karen, Emma and I saddled up and rode towards Round Top Park. The road passed between a trailer and a white, clapboard farm house. Just after we passed the farm house on Sutliff Hill Road, we saw at the hillcrest a middle-aged woman wearing glasses walking towards us. We stopped when she came up alongside the horses.

“Have you seen the bear?” she asked her voice edged with fear.

“No, but I heard there is a big black bear in the area,” I said.

“It’s huge! He’s been hanging around our place near the back door,” she said looking over her shoulder. “I’m surprised to see you riding with that creature prowling around.”

“We ride by here often and haven’t seen it,” I said. CJ shifted his weight and rested his back foot on the dirt road.

“Every morning that bear walks right down the middle of Weaver Hill, then cuts across the field and goes downhill past our house. He smells absolutely horrid,” she said visibly nervous. “After he leaves our place, he heads towards the stream at the base of the ridge near Murray Creek Road.” She glanced down the hill towards her house and the open fields dotted with bushes and trees.

“That’s near our barn,” I said. “A large bear was up on Connie’s back porch trying to get the birdfeeders a few times this week. She said it was the biggest bear she had ever seen.” I replied glancing down at the woman.

“I hope we don’t either,” I said watching the woman turn away from us and hurry down the road.

We continued up the hill a short distance when suddenly, a deer bolted through the fields and backyards near where the woman had indicated she had seen the bear. The deer traveled at lightning speed, crossed the road and leapt into the woods which bordered Round Top. I looked in the direction the deer had come for the bear but nothing was moving; the horses were jumpy and everything was deadly quiet as we rode on into the park.

We finished our trail ride and came back via Weaver Road without seeing the bear. The day was muggy and sizzling, hot. The horses were dripping sweat and sticky with dirt. When we reached the barn, Karen hooked up the hose to the well’s hand pump, and we took turns bathing the horses.

About a week later, Karen left work early and we rode on a hillside covered with open fields near Oakfield Drive. The fields had paths mowed through the knee high grass. We cantered, trotted, and jumped puddles nestled in the soft earth. At a rise overlooking the countryside, we stopped and marveled at the beauty of the fields and hedgerows dotted with trees and surrounded by mountains.

“I was up in the park the other day hiking alone,” Karen said. “While I was walking I kept thinking about the bear and what I would do if I meet it on the trail.”

“I know the feeling. The other day, Emma and I were riding on the Green Trail; the trail that winds around and around like a maze. Every time the trail twisted and turned on itself I wondered if we would come face to face with the bear. Luckily we didn’t see him,“ I said.

Weeks later at the end of June, Emma and I were on our way to Horse Heaven. We planned to administer a treatment to harden the horses’ hooves which Gene Fletcher, the stable’s farrier, recommended . I slammed on the breaks when a baby fawn jumped in front of the car and bounded into the tall grass in an adjacent field. The woman in a car behind us screeched to a stop, jumped out and followed the fawn into the field with her camera. A little further down the road I pulled the car into the gravel when I saw several baby skunks standing at the edge of the road. Finally, I turned the car into the driveway in front of the barn.

After we had finished with the horses it started to rain. Emma, Johnn and I stood in the barn talking and waiting for the downpour to stop. Heavy rain poured out of the sky, pounding on the tin roof and running into the gutters.

“We saw several baby skunks near the road on our way up to the barn,” I said as the raindrops bounced off the hard asphalt on the road a few yards away.

“I saw them down there too, on Round Top Road,” replied Johnn.

“Can they spray at that age?” I asked thinking how adorable they looked.

“It’s my understanding that everything is working as soon as they are born,” replied Johnn. “So I wouldn’t go picking them up.”

“That’s good to know,” I replied, immediately discounting the thought of taking one home for a pet. “Just before we saw the skunks, a tiny fawn jumped in front of our car and hopped into the tall grass alongside the road.”

“There’s a lot of wildlife in the woods. That’s for sure,” said Johnn.

“Several days ago a woman told us she saw the bear up by her house. She said it walks right down the middle of Weaver Road, crosses her field and makes a beeline of Murray Creek Road. Have you seen the bear lately?” I asked.

“No, I haven’t seen it,” John replied. He paused for a moment then continued, “This time of year, bears make a big circle looking for food. There isn’t a lot for them to eat so they can travel pretty far. When the berries get ripe they’ll stay put and won’t travel so much.”

Its August now and every ride this summer I’ve looked for the bear, but didn’t even see a glimpse of him. From what I understand, most bears sleep during the day either in a tree or under bushes. They come out in late evening, night or early morning. Wherever the bear is, I haven’t seen him and nobody I know has seen much of him lately either. We’re all pretty happy about that.