Horses Do Lie Down 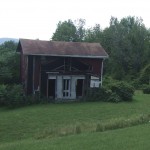 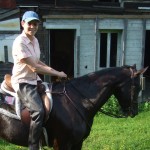 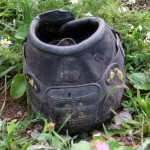 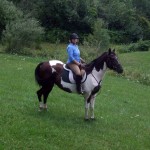 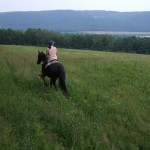 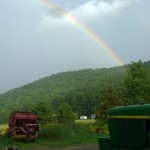 In the middle of June the weather started to heat up, so riding became either an early morning or late afternoon activity. One morning, around 8:00, Emma and I were at Horse Heaven. The horses were still in the barn waiting for Johnn to turn them out for the day. We hurried to get our tack together and as I passed Jupiter’s stall I noticed he was lying down with his feet tucked under him. His eyes were half shut and he was snoozing. All of the other horses were up and moving around but not Jupiter. I stood by his stall watching him when all of a sudden he laid completely down with his neck stretched out and his legs flung out from under him.

“Emma! Jupiter doesn’t look too good,” I said setting down my saddle next to his stall.

Before I received an answer from Emma I ran the short distance to the barn office and found Johnn sitting behind his desk sipping coffee.

“Johnn, I think there is something wrong with Jupiter,” I said the words rushing out of my mouth, “He’s completely stretched out in his stall!”

Johnn took another sip of his coffee and calmly replied, “He’s just sleeping. I have a really hard time getting him up in the morning. I usually have to go into his stall and nudge him a few times to wake up.”

I left Johnn’s office, walked across the dirt driveway and back into the barn. Emma was standing at Jupiter’s stall holding a brush in her hand. I looked into the horse’s stall and not only was he still stretched out, now he was moving his legs and lips. Obviously, he was engaged in some kind of dream state as he moved into deeper REM sleep.

“Johnn says he’s just sleeping. Why don’t we brush Pepper and maybe by that time, Jupiter will be ready to go,” I said picking up the brush bag.

The days passed one by one, each hotter than the next. The ground, once wet and soggy from all the rain we had in the first weeks of June, began to dry out. It was early evening and still sizzling when Karen and I saddled the horses and rode out of the barn at Horse Heaven.

We rode up Pump Station Hill Road until the horses reached a trailhead that led into the woods near Round Top. This was CJ’s second summer riding in the park. He enjoyed the woods and followed behind his mother, Pepper, without any problems. The steep trail led up the side of the mountain through white pines, honeysuckle bushes, and an assortment of maples and oak trees. At the top of the ridge, we came to an open field that stretched across the Susquehanna River basin. The grass was very high and budding out with seeds waving in the gentle breeze. We circled through the woods and came to a service road. The service road led down a gentle rolling hill to an open expanse of newly mowed grass. In the middle of the lawn, directly in front of a deserted house, stood an old water pump, and a bit further on were a couple of old barns.

Once past the abandoned homestead we turned onto the power line access road. We galloped up the road dotted with telephone poles and overgrown with weeds. CJ moved ahead of Pepper taking huge leaping strides across the soft ground until we reached another trailhead at the top of the hill leading into the woods.

I looked down at CJ’s front hoof and said, “Oh crap! CJ lost a boot. It must have happened when we galloped up the hill.”

“It probably came off in the tall grass,” replied Karen turning Pepper around.

We rode back down the power line passing the telephone poles surrounded by weeds, looking for the boot. My heart sank as I thought what the loss represented; both financial and in time. It took several days or weeks to get a replacement boot, which meant CJ wouldn’t have a boot to help protect his feet from the gravel road. I was surprised; the Old Macs that he wore had never fallen off before although last year, Pepper’s Edge boots had often come off. Usually, Pepper’s boot only slide off the hoof and hung on her pastern, ripping the gaiter, which meant the gaiter had to be repaired. Last year, the company ran out of replacement gaiters and it took weeks before I finally managed to get one shipped.

“I love and hate these horse boots,” I said looking from side to side into the grass trying to see the Old Mac.

“I don’t see it,” said Karen as she reached the end of the hill near the old barn. Do you think she lost it near the old homestead?”

“No, probably not,” I replied disappointed. “We might as well head back into the park.”

We turned around and retraced our route past the telephone poles. Halfway up the rise Karen dismounted and held up the horse boot.

“Great! I’m so glad you found it!” I shouted relieved.

I dismounted. Karen handed me the boot and I said, “It looks ok. It just slipped off.”

Karen held the horses while I buckled the boot onto CJ’s hoof and then swung back on.

“Do you want to try riding down the line of telephone poles instead of going back up the hill? We can pick up the trail on the other side of that field,” I said pointing to a huge meadow that opened up past the old homestead.

Near the bottom of the hill, at the fields edge there was a bog with deep mud and cattails. Swamp plants grew in the soft earth. CJ grabbed a few bites of a strange looking weed. I thought to myself, ‘I hope they aren’t poisonous’ and reined him in.

We turned the horses toward less marshy ground and headed down the edge of the field across acres and acres of open grassland. The sun was low in the afternoon sky and the heat of the earlier day lapsed into a pleasant warmth that enveloped us. The grass made a rustling sound as the horses passed through. We came to the entrance of the woods which were dark and cool compared to the open field.

A few feet from the trailhead CJ surprised me. All of a sudden, I felt him tuck his back feet under himself, in an instant my feet were flat on the ground, so I did what seemed practical and dismounted. I turned towards CJ wondering what could be wrong, when he laid his head completely down into the grass. What the heck is going on here! In a split second hundreds of weird thoughts raced through my mind; ‘CJ must be poisoned by that weed he ate! What will I tell Connie? This can’t be happening….’ Then I realized, even if he was dying from a strange poison weed he wasn’t going to just lie there. No matter what his problem was he was going to stand up, so I pulled hard on the reins and shouted, “Get up CJ!”

“It’s a bad one. I used to have a horse that laid down all the time. It was a pain,” she said turning Pepper towards the woods.”

“I’ll watch out for that,” I said. “I thought he was dying, similar to the other day when Jupiter was asleep in his stall.”

“What did you do when your horse lay down while you were riding? I asked.

“I had to hit him to get him to stand up. We would be riding along and all of a sudden he’d just decide to lie down,” said Karen. “It was really frustrating.”

“I never knew anyone who had a horse like that. Although once I was riding with a girl whose horse tried to roll in the creek with her in the saddle, but that was only in water,” I said.

We rode through the dense woods, the trail weaving through honeysuckle branches and rose bushes. The trail passed near a shear precipice, the horses walked by and picked up a trot heading towards the baseball diamond in the middle of the park. The sun sank to the horizon as the warm summer night approached soon to fill the woods with darkness. The tree tops hummed with the songs of the cicadae, as we traveled down the gravel road through the park steering a course toward home.