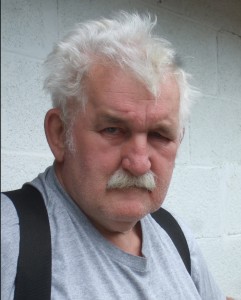 Times change; people and horses grow older and eventually die. Life at Horse Heaven, in this regard, is no different than anyplace else. A few weeks ago, I talked with Johnn as I stood in Pepper’s stall and brushed down the mare. While cleaning out his desk, Johnn had come across a few pictures of the first horse he owned at the stables. As we chatted, he shared with me the story of Champ.

Years ago in 1987, Connie and Johnn saw an ad in the Pennysaver listing a Belgium horse for sale. The morning of September 5th the two headed for the NY State Fair in Syracuse; on the way they planned to stop and have a look at the horse.

The couple pulled into the drive near the barn. The young man selling the horse explained that he was headed for college and his father couldn’t keep Champ. He brought the horse out for Johnn and Connie to look over. Champ stood about 16.5 hands and weighed between 1900 to 2200 pounds; by any measure truly a large horse. 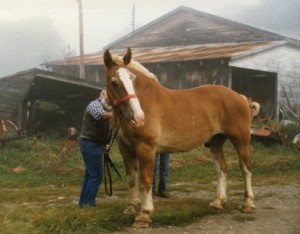 The teenager explained Champ’s training. When logging the father and son first chopped down and topped the trees; to haul the logs out of the woods they used the draft horse. They would lead Champ into the woods and hitch a chain to a log. Champ pulled the log down the logging trail until he reached the truck. One man went with the horse to load the log onto the back of the truck, while the other waited in the woods for Champ to come back. All day the draft horse worked between the two men; walking back and forth up and down the logging trail by himself. If the man in the woods moved to another location, all he needed to do was whistle for Champ to find him. 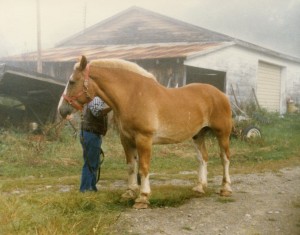 Connie and Johnn purchased the horse and brought him back to their farm. Champ joined Connie’s horse, Dolly, and the beefers in the pasture. Johnn cut trees and Champ hauled logs. The years passed by uneventful until one dark night in early winter. The horses came into the barn for the night and Johnn noticed that Champ’s right-hind hoof looked strange. The shadows crisscrossing the stable made it hard for him to get a good look at the hoof, so he hurried to get his flashlight.

Johnn shone the light onto the hoof. He saw a round hole in the hoof wall; a stone had worked its way from the bottom of the hoof and come out through the front. The discovery surprised Johnn as Champ never exhibited any sign of being lame or in pain. 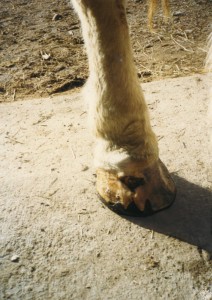 It took a month of stall rest and soaking the hoof in Epson salt, 3 times a day for the hoof to heal. Champ didn’t complain; he simply munched hay, soaked his hoof in the bucket and waited for Johnn to take it out. Johnn often grabbed a coffee in his office while he waited for the solution to work on the wound. By the end of the month, the hoof wall had regrown and the horse returned to the pasture.

A few more years passed by, then one dark night in the cold of winter Johnn opened the barn door for the horses to come into their stalls. Champ fell down on an icy patch in the pasture and couldn’t get up. He struggled and stuggled; first pulling his front feet into position to stand, but his hindquarters refused to follow and he slipped back to the frozen ground.

At first Johnn didn’t know what to do; however, he decided the horse needed to brace himself to get off the ice. Johnn opened the pasture gate, and then, went to the shed where he housed his tractor. He climbed up onto the tractor, sat down and turned the machine on. Slowly, he drove into the pasture and approached the fallen horse. Placing a harness on Champ, Johnn bolted a long chain from the tractor to the horse. Moving slightly forward, the tractor steadied the animal; not pulling Champ but giving him support. The huge horse pulled his front legs up to stand; Johnn easied forward slightly with the tractor and Champs back legs sprung forward bringing the horse to a standing position. Johnn turned off the tractor, jumped down and took hold of the horse. He walked Champ to his stall, looked him over for injuries, and finding non, bolted the stall gate and turned in for the night. 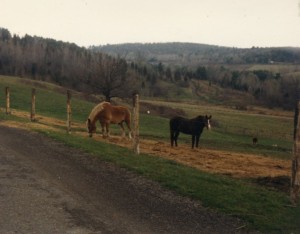 The next morning arrived as cold as the day before. Johnn made his way from the house down to the barn and stood before Champ’s stall. The horse lay in the dry sawdust and again could not stand up. Johnn hurried into his office and called the vet.

The vet arrive and entered Champ’s stall, examined the horse, shook his head and turned to Johnn. “Either his hip is out or his back. It’s a common problem with Belgiums. Unfortunately there isn’t anything I can do about it.”

Johnn looked at his horse laying in the stall, unable to get up and in pain. “Then you better put him down. I don’t want him to suffer.”

To witness the death of a friend and faithful companion is no easy task. The vet prepared the drugs and filled a large needle as he prepared to euthanize the horse. The drug, once injected, quickly shut down the horse’s central nervous system and rendered Champ unconscious. His heart stopped beating and he no longer drew a breath through his large nostrils, but lay motionless.

The vet packed his equipment and left the stables; leaving Johnn alone in the barn. The winter wind picked up and a few snowflakes fell. Johnn needed to bury Champ, but didn’t own a backhoe, so he called his brother Paul.

“Sure I can come down and help you with the horse,” said Paul. “Do you mind where he’s buried?”

“Then let’s bring the horse up to my place. I have a spot where the ground hasn’t froze yet.”

In a short time Paul arrived at the stable. He parked his flatbed truck in the field across from the barn. Johnn opened the pasture gate, drove his tractor through the pasture and into barn. Then the two men struggled with the dead, 2000 pound horse; finally securing one end of a heavy chain around the animal and the other end to the tractor. Once that was done, Johnn dragged the carcass out of the stall, through the barn, and crossed the road to where the flatbed truck waited. The two men positioned the dead horse at the end of the truck and Johnn drove his tractor alongside the vehicle. Champ came to a stop on the truck bed and the men secured him with a heavy chain.

The two men hopped into the truck and headed up the road. They passed a Mom and Pop luncheonette/gas station on their trip to Paul’s property. The business owner stood in front of his store as the truck with the dead horse slowly drove past.

Paul parked the truck on a secluded section of his property, next to a backhoe. The two men decided where the grave would be, and then, Paul climbed into the backhoe, started it up and dug a huge pit. When the grave was dug, the men secured a chain to the dead horse and the backhoe. Paul started up the backhoe and pulled the carcass off the truck. Slowly, he lowered Champ into his grave, and once there, covered the horse with dirt until he was buried.

Paul drove back to Johnn’s place, dropped him off and then turned around and headed home. On his way, he stopped by the Mom and Pop luncheonette for gas. The owner, curious about the horse he had seen on the back of Paul’s truck earlier, walked up to him and asked, “Didn’t you have a horse on the back of this truck?”

“Why yes I did. You see that horse is so big we can’t put him into a regular trailer. The only way we could transport the horse was to train him to lay down, quiet and not move while on the back of the truck. As long as that chain lies over the horse, he won’t move a muscle. Then when we want to get the horse off the truck and unload him, all we have to do is pick up the chain and he gets right up. We put a lead rope on him and back him off the truck.”

Paul climbed back into his truck and smiling drove away home. The winter sky cleared a bit as the wind parted the clouds. Somewhere deep in the woods deer found shelter while the black bears hibernated waiting for the season to change. In the meantime, Dolly mourned the loss of her pasture buddy.

“That’s quite a story Johnn,” I said.

“Champ was a good horse. The best trained horse I ever had.”

This entry was posted in Uncategorized and tagged death of a horse, horse death. Bookmark the permalink.