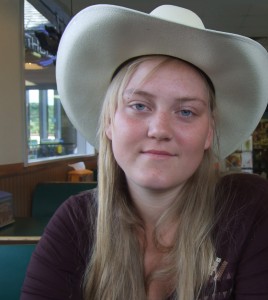 A few weeks ago I met Sara Rummel at the Dandy Mini-Mart in Van Etten, NY. A very composed and capable horsewoman; she told me the details of an attack on her horse Denahi and the sighting of a mountain lion several days before the attack.

In the Finger Lakes region of NY State winter days are short; sunset in the early part of February 2015 occurred around 5:20. The daytime temperature ranged in the low 20’s with nighttime temperatures dipping into the single digits. Snow storms passed through the region; wind forced snow into deep piles where it froze on creek beds, pastures and woodlands. On such an afternoon, Sara rode her horse, Denahi, down a partially wooded area on her way home from visiting with her Mother. The short cut led through the woods and connected Crumtown Road with Emery Road.

An old, pasture fence paralleled the trail for some distance, ending just before the path cut across Sulphur Springs Creek. As Sara approached the creek Denahi began to act up and she almost fell off. She urged her horse forward but again the animal refused to move. Sara realized something had spooked her horse, so she stopped and looked around. She glanced to her left and spotted a mountain lion running back and forth along the fence line. The big cat turned, stared at Sara and her horse, then slowly walked towards them. The horse and rider stood motionless; then suddenly, the mountain lion turned, leapt the fence and disappeared into the woodlands. Sara slowly walked her horse forward, crossed the creek, and when she felt safe, pushed Denahi to a canter; leaving the trail behind at Crumtown Road.

A few days later on the night of February 5th, the thermometer dipped to 3 degrees Fahrenheit. Denahi and the rest of the herd, consisting of 10 horses, roamed the open pasture; bordered by trees and brush. At 6:00 that evening, Sara put a round bale of hay out for the horses to eat. Everything was still, except for the quiet sound of horses munching hay and Sara’s boots walking through the snow. A full moon rose into the sky by 7:20, illumination reached 98.25% making visibility excellent and deep shadows crisscrossed the frozen land. 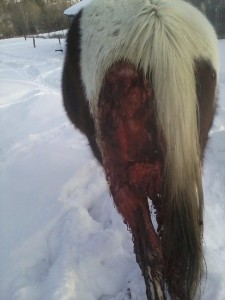 The next morning Sara walked out to the pasture to feed and check the horses. Denahi stood by the round bale feeder but something was wrong. Some creature or object had torn the flesh from her horse and created a large wound. A gash ran down his buttock, the flesh torn off and the muscles ripped apart. Near-by the blood stained snow exposed where the horse had fallen, laid during the night and then struggle to his feet. 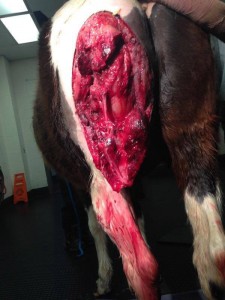 Before long, Denahi boarded a horse trailer on his way to Cornell University Equine Hospital; part of the University’s College of Veterinarian Medicine. Sara backed her horse out of the trailer and waited for the team of vets to care for her horse. The vets sutured Denahi, applied an antiseptic dressing called silver wound kote, and inserted two tubes to drain the wound. Sara asked the vets if a mountain lion could have attacked her horse, but was told the injury was probably made by a barbwire fence. 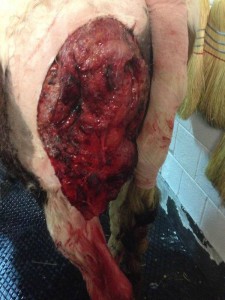 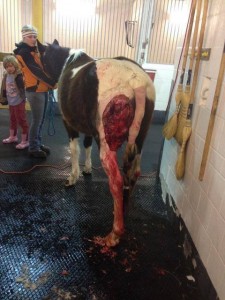 Denahi with Sara at Cornell Vet School waiting for surgery

Sara having seen a mountain lion only a few days before the attack had reason to believe that her horse was injured by one. A large animal track, near where her horse had been injured, was frozen in the snow. She contacted the DEC, New York State Department of Environmental Conservation, an environmental protection and regulatory agency and reported a possible animal attack. An agent came to the farm, looked at the paw print but told Sara he could not tell exactly what animal the track belonged to; but in all likelihood it was a coyote. 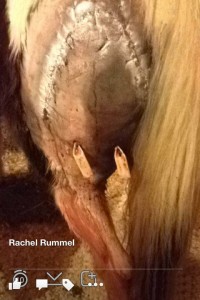 Four days after Denahi’s surgery, a vet from Cornell arrived at Sara’s place to check up on the horse and remove the drainage tubes. The wound did not look good; broken open and oozing infection. The vet said there was nothing more that could be done for the horse.

Sara refused to put her horse down and decided to fight for Denahi’s life. Sara had been posting pictures on Facebook since the injury to her horse occurred; explaining the injury and its progression. One friend commented after hearing that the wound was not healing that Sara should try Underwoods Medicine; a spray on antiseptic. Sara took her friends advice and applied the ointment every day for 3 months without washing the wound.

Underwoods Medicine worked, the wound healed remarkably well. After 3 months of stall rest and no exercise, Sara started to walk Denahi slowly and then introduced him to turnout. Denahi returned to a pasture close to the house. He has the company of an old mare and some cows. Everyday his wound gets better and soon there will be no sign that it was ever there. 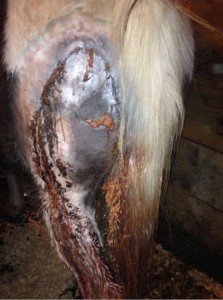 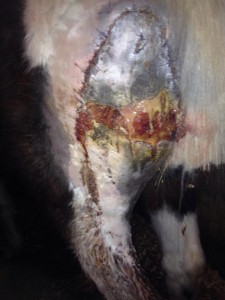 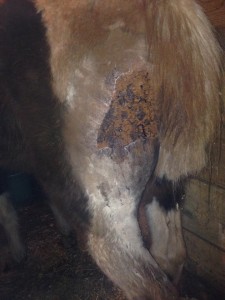 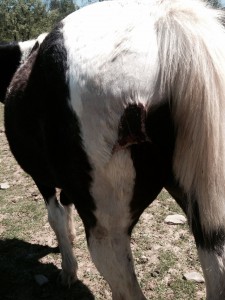 Denahi’s injury as of July 1 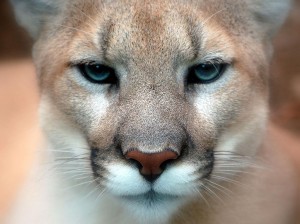 As of this date, the story ends here. What happened on that moonlit night in February nobody will positively know; however, one can speculate. Officially, mountain lions do not exist in New York State. When one is sited the authorities will tell you it wasn’t a mountain lion, but a bobcat, coyote or maybe even an ordinary house cat. Farmers, horse people, hunters, loggers, hikers and anyone else who venture into the woods in the Finger Lakes region of New York State or Northeast Pennsylvania will tell you differently. In reality, the animals have been sighted throughout the Northeast. Just mention mountain lions and you will hear of an encounter with one of the big cats. In fact, Anne Shaffer and I saw one while riding in the spring of 2010 near the PA State Game Lands – Number 239, on Chamberlain Road.

How did the animals get here? Everyone has a different theory, but it doesn’t matter. Everyone entering the woods should be aware that mountain lions exist in this region and should take precaution. The Desert USA website suggests the following if you encounter a mountain lion:

1. Do not approach a mountain lion
2. Gather and protect children
3. Keep eye contact and back away slowly, DO NOT RUN, – an act that might trigger a mountain lion’s pursuit instinct
4. Act aggressively, look large, wave arms, shout, throw stones or branches
5. Give the mountain lion an avenue for escape
6. If attacked, try to keep facing the mountain lion and fight back with your walking stick, pepper spray, stones – any weapon that comes to hand.

Be safe and happy trails to everyone. If you have encountered a mountain lion or have a story to share please leave a comment. Comments are always welcome.

2 Responses to Sara Rummel’s Encounter with a Mountain Lion