Several months ago, Sam developed a small fleshy growth in the corner of his eye. Johnn watched the abnormality and medicated it; within a month the pinkish mound of skin grew 50% of its original mass and transformed into a walnut sized tumor. Connie scheduled an appointment with their vet, Robin Rodgers to have the tumor removed. 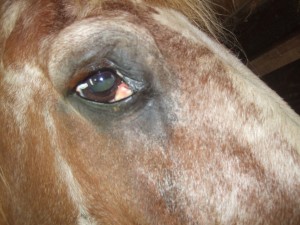 The morning sun battled with thick clouds creating a haze over the stables; rain threatened. John, Connie and I waited inside the barn for Robin to arrive. Sam stood peacefully in his stall not realizing he was scheduled for an operation. Before long, Robin pulled her car into the driveway. 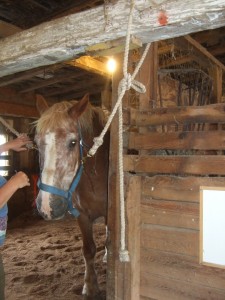 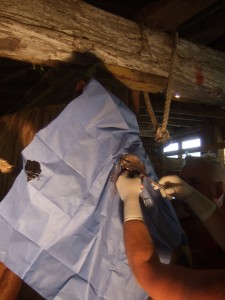 Sam received tranquilizers. Robin numbed the eye to stop the lids from moving, and then, she fastened a protective blue cloth over the horse’s eye. Robin sutured the eye open and carefully cut out the tumor. 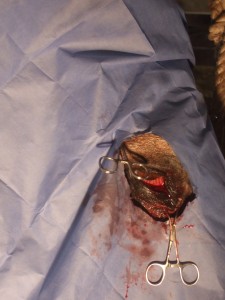 Sam’s advanced age, somewhere around thirty, ruled out any further procedures. Although, Robin removed as much of the tumor as she could see there was always the chance that some cancer cells remained resulting in the disease returning. With a younger animal, chemotherapy or radiation treatments would be used to illuminate the remaining cancer cells; in this case the horses’ immune system would have to take care of any remaining illness. Without performing a biopsy, Robin couldn’t determine what type of tumor she had extracted; however, she suspected ocular-squamous-cell-carcinoma. 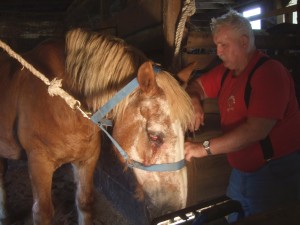 Ocular-squamous-cell-carcinoma on the eyelid generally appears as a pink mass. Horses with non-pigmented skin areas are more likely to development this type of cancer. Appaloosas, Paints, Halflingers, and some draft horses including Belgiums are more susceptible to the disease. 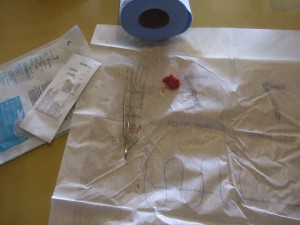 Robin explained that in some cases a tumor may be benign and not actually cancerous. A foreign body such as dirt or a splinter could have caused the growth.

After removing the tumor, Robin placed the lump on a sheet and bisected it looking for some type of foreign body at the center of fleshy mass. She discovered none.

“Either it will come back or it won’t. Only time will tell. Hopefully his immune system will be able to fight off whatever cancerous cells are left”, said Robin. “If the tumor comes back in a couple of months, the cancer will probably metastasized to his liver or lungs.”

Sam remained on stall rest for a few days and then returned to the pasture. The days and months passed by. Johnn kept a close watch on Sam’s eye. The cancer didn’t return and the horse remained in good health. With some luck, we all hope that the old Belgium will beat the cancer and have many more years of life at Ballentine’s Horse Heaven.

This entry was posted in Uncategorized and tagged cancer in horses, eye surgery for horse, Ocular-squamous-cell-carcinoma. Bookmark the permalink.