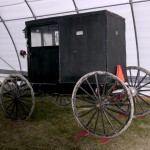 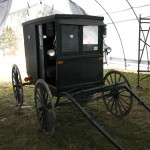 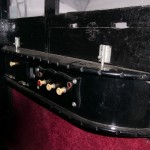 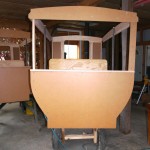 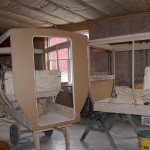 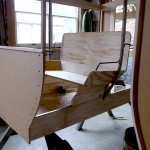 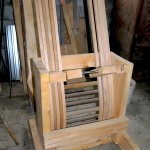 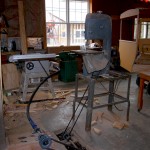 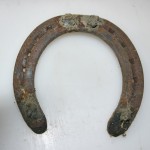 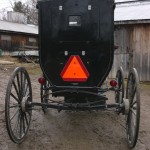 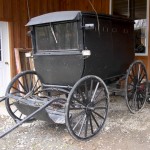 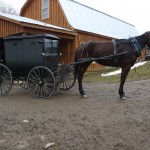 The cold January air dropped a few degrees as soon as the sun headed for the horizon. I brought CJ back to his stall after a short solo ride in the park, took off the saddle and brushed the horse down. The moonless night fell hard across the countryside outside the barn. I looked over at Pepper standing in her stall. She must have rolled earlier on the half-frozen, wet ground in the pasture since a thick layer of dry mud covered her black coat. When I finished with CJ, I stepped into Pepper’s stall and gave her a once over with the curry comb.

The time came to pick up my saddle, pads, brushes and bridle, walk through the barn and stow my equipment in the tack room. Now that the gear was carefully put away and horses brushed down, I switched off the barn light and opened the small side door to leave. An arctic wind hit my face as I tried to adjust to the dark. A single, round light bounced up and down, suspended in mid-air. The lightbeam came closer and closer. Although Connie wasn’t visible, I knew she must be holding a flashlight, heading to the barn for her nightly chores.

“Hi Connie,” I said watching the light draw near.

“I got your email about the Amish carriage,” I said flipping on the light switch.

“I emailed everyone. I saw it on Craigslist. Johnn and I went to a farm outside of Wyalusing and bought it. It’s in the new storage shed if you’d like to have a look,” replied Connie stepping into the barn and closing the door.

“I’d love too when it’s lighter out. Who did you buy it from?” I asked.

“A man named John Newhart at Ment2befarms. He’s a horse dealer and dairy farmer near Herrickville not far from LeRaysville. He bought the carriage from another farmer and stored it in his barn.This buggy is a Lancaster style carriage which is different from the style the Amish in LeRaysville use,” replied Connie.

“Lancaster is a couple of hundred miles away. I wonder how the carriage came to Bradford County?” I asked.

“I don’t know. Maybe John could tell you. He said that to get the carriage to his place he arranged for an Amish woman to drive it over. She told him she never wanted to see that carriage again,” replied Connie.

“I guess each Amish group has their own style of carriage,” I said pausing and then continued, “Donna must be excited.”

“As soon as I bought the carriage I called her. She is excited. When spring comes we’ll hitch Sam up and take the buggy for a ride,” said Connie.

A few days later, I phoned John Newhart and asked if he knew where the Lancaster carriage had come from. He didn’t know but the man he bought the carriage from might have an idea. John told me that he knew an Amish man who was building two carriages and if I wanted to come down to see the buggies, I could. Of course I said yes and arranged to meet John the following Wednesday.

The morning light peeked in my window seeping through the cloud covered sky. I dressed, gathered my writing pad, pencil, and camera, stuffing everything into a canvas bag, hurried breakfast and left for Herrickville. The car rolled along Route 220 to the stoplight just north of Ulster where I turned onto Bridge Road, crossed the Susquehanna and headed into unknown territory. The narrow ill-marked road turned and twisted up and over rolling hills through dairy farms, wooded hilltops and creek beds. I made a wrong turn at North Rome and found myself at the Litchfield Volunteer Fire Station where a man gave me directions putting me back on the right road. Finally, I came to the CC Allis lumber yard where I stopped a second time to ask another man for directions to the Newhart farm. He pointed up the road a few yards.

“You’re almost there. Turn at the intersection, go up that dirt road, turn right at the cemetery and you’ll head down a very steep road to the Newhart farm,” he said.

I turned up the dirt road. The man had said the street would become steep, but I could not believe how steep, almost straight down, and sure enough there was a huge dairy barn on the left and a house on the right. I pulled into the driveway as three barking dogs greeted me, and met John and his wife Allison. It wasn’t long before I climbed back in my car and followed John’s huge dump truck up the steep hill. A very short trip took us to an Amish sawmill. We were greeted by a good-natured Amish gentleman. The man showed us his workshop where he was constructing two carriages.

“Is it ok to take pictures of the carriages,” I asked.

“Sure,” replied the Amish craftsman.

“Just don’t get him in the picture,” John said smiling.

“No problem,” I said and began taking pictures. “I understand that each Amish community has their own style of carriage. Is there a problem with using a Lancaster carriage here in LeRaysville?”

“No not really, there have been Lancaster carriages here. If someone moves from Lancaster they’ll come here with their carriage and might keep it and use it for awhile,” he replied.

“How many carriages have you built?” I asked.

“These are the first two. My brother built a few carriages though,” he replied.

“How long will it take you?” asked John.

“That depends.. it might take me awhile since I’m working on them in my spare time, but someone working regular hours would take about 3 to 4 weeks,” he replied.

“You can see that the front is rounder than the one I sold Connie,” said John pointing to the front of the carriage under construction.

“I see. When Connie explained it was more rounded I visualized the carriage being bowed out in front. Now I see what she was talking about,” I replied.

“You’re carriages don’t have a canvas back that snaps off?” John asked the Amish craftsman.

“No, we’d rather have a door that opens in the back. It makes it easier getting in and out without having to work all those snaps,” replied the Amish craftsman.

“The back of Connie’s carriage snaps off?” I asked.

“Yes, the one I sold Connie has snaps,” replied John.

“How far along are you in the building of the carriages?” I asked.

“Oh, not quiet half way I’d say. I still have the sides to finish, the doors, and windows and paint it,” replied the Amish craftsman.

“This is how the sides of the doors are made,” said John walking over to a large wood vise. The claps held identical strips of wood about 1 inch in diameter and bent at the ends.

“That’s amazing! How do you get the wood to bend like that,” I asked.

“I use steam and wet the end where I want the wood to bend then clamp the wood in the vise for a few days,” replied the craftsman.

“You have such a well equipped workshop. How do you run the saws and planer without electricity?” I asked.

“I have a diesel engine which is hooked to a shaft under the floor that runs the tools. The shaft spins and turns belts on a pulley system attached to the equipment,” he replied pointing to a metal shaft exposed and built into the floor near a bandsaw.

“Connie’s carriage has a pedal on the floor which I assume is a brake,” I said.

“Yes, that’s the brake. The one Connie has is hydraulic. You have to add fluid for it to work,” said John.

“Mine isn’t hydraulic. It works on a cable system,” replied the Amish craftsman.

“So you have taillights and headlights on the carriage. How long does your battery last?” asked John.

“About 8 to 10 hours. I only put the battery in the buggy if I’m going to be out after dark, that way I don’t have to recharge the battery so often,” the craftsman replied.

“And what about the wheels, are you going to make the wheels too?” I inquired.

“No, I bought them from a buggy shop near Vicksburg. I just have to put them together,” he said.

“And the carriage has a window and windshield wiper too. Does that run off the battery?” asked John.

“No, the windshield wiper is hand powered,” he replied.

Quickly, the conversation shifted from the carriage to horses. “You want to buy my horse John? He’s 15 years old and getting too old for the carriage,” the Amish gentleman said lightheartedly.

“How long can you use a horse to pull a carriage?” I asked.

“Show her the type of horseshoe you use in winter,” said John smiling.

The Amish gentleman picked up a horseshoe from many resting on a shelf and placed it on the table. The shoe had a rough, rounded bit of metal attached to four places on the shoe at the toe and heel.

“We use these most of the year,” he replied. “The shoe grips the road better so the horse doesn’t slip.”

Suddenly an Amish buggy stopped in front of the workshop. We walked outside and met the craftsman’s teenage son. The young man cordially sat in the carriage while I took pictures of his horse and buggy. His carriage had only one seat, akin to a sports car, and in contrast to the family three seat carriage. He made short work of unhitching the harness and took the horse into the barn.

I thanked John and his friend for letting me see the carriages, returned to my car and drove towards home. This time I knew where I was going and which way to turn. The beauty of the quiet Pennsylvania countryside with rolling hills cut by streams sped by until I reached Bridge Street and crossed the Susquehanna at Ulster turning towards Athens on route 220. I drove past the Honda dealership in Milan, and the Dandy Mini Market where people pumped gasoline into their cars. Continuing on, I came to sidewalks and cross streets all the elements of the grid, and although I’ve lived in the “Valley” for many years, I suddenly realized there was an entire world I had never encountered only a few miles from home. I thought how strange it was that minutes away lies a peaceful, quieter existence where horses traverse the road pulling handcrafted carriages.

This entry was posted in Uncategorized and tagged Amish carriages, carriage horses, construction of an Amish carriage, LeRaysville. Bookmark the permalink.