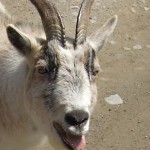 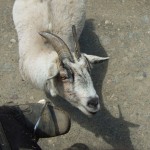 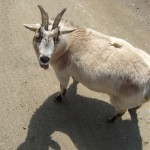 By the time we arrived at the stables the temperature had reached the mid 50’s. The grey sky didn’t deter us since for mid February it was a beautiful day. Emma and I rode through the park taking the usually route. As we swung towards home down Weaver Road near the Slocum place, the familiar bleating of their goat floated on the air. CJ sidestepped away from the fence and swung his head around looking for the goat. Pepper picked up her pace with keen interest on locating Roxy. It wasn’t long before both horses knew exactly where the goat was.

As soon as Roxy saw us, she trotted out of her pasture and came alongside Pepper. Swiftly, the goat ran in front of the horse. Once Roxy blocked Pepper’s escape, the goat repeatedly stuck out her tongue, spat and tried to lick the horse’s leg. Pepper arched her neck, looked the goat square in the eye and quickly stepped aside, urgently trying to evade the intruder. CJ stopped dead in his tracks, but with some encouragement from me moved forward. As we gained ground on Roxy, CJ tried to dodge the goat with a mad dash around her, but I pulled hard on one rein bringing the horse’s head in line with his shoulder, not allowing him to bolt.

In the mean time, Emma and Pepper were trying their own avoidance ploy. Roxie kept trying to block Pepper’s way by trotting in front of the horse and stopping. Pepper struck out with her front leg in a threatening motion. She laid back her ears and threatened to bite the goat as Emma reined the horse in. From where I sat on CJ, it looked like Pepper was too afraid to get close to Roxy so all Pepper could do was made a funny threatening hop which Roxy paid no attention to. Pepper lifted her back leg to kick the goat but again she wasn’t close enough. Roxy stayed near Pepper as if that was where she was born to be. Emma had all she could do to keep Pepper in line and outmaneuver the goat.

We passed the end of Slocum’s pasture. Past encounters with the goat had always ended when we reached the limits of her home. I was sure Roxy would turn around and go back as she had always done before. We swiftly trotted away hoping to leave the goat behind but unfortunately that wasn’t the case. To our surprise Roxy ran very fast keeping up with the horses and came alongside CJ. By this time we were far from the goat’s home turf.

“The goat is still following us,” said Emma looking back down the road.

“I know. We’ll have to walk the goat home after we put the horses away,” I said keeping an eye on Roxy.

Roxy settled in next to CJ. When the goat threatened to walk too close to the horse, I reached down with my short riding crop and gently tapped the goat on her shoulder as a warning to back off. As soon as CJ saw that I wasn’t going to let the goat get too close he relaxed, but kept his head and one ear slightly cocked in Roxy’s direction. Since the goat was shorter than CJ, when Roxy was very close the horse couldn’t see the goat and that made him nervous.

Finally, our strange little group made it back to the barn. Emma swung off Pepper. Roxy immediately ran over to her, placed her hooves on Emma’s chest and started spitting. In the meantime, I dismounted as Emma freed herself of the goat.

“Grab her collar!” I shouted.

“Okay,” replied Emma trying to seize Roxy by the collar.

“Let me hold the goat. You take Pepper into her stall and I’ll wait here. Come back as quick as you can with a lead rope,’ I said.

CJ waited quietly, standing next to the goat. Emma hurried into the barn, locked Pepper in her stall and within a couple of minutes was back with a lead rope.

“Here, hold CJ,” I said handing her the horses reins. “I’ll tie the goat up to the hitch-ring on the barn.

Quickly, I led Roxy to the side of the barn, looped the rope through a metal ring and tied a slipknot making sure I didn’t give the goat too much room to move around and get into trouble. Roxy looked at me with her big yellow eyes, obviously not happy being tied up.

“Ok, let’s get these horses unsaddled and put up for the night,” I said as we hurried into the barn.

I led CJ into the dimly lit barn. We immediately turned a sharp corner and CJ rushed into his stall. Swiftly, the horse’s girths and breast-collars were unhooked and saddles pulled off. Roxy began to bleat causing every horse in the barn to jump and nervously move around in their stalls. Jupiter turned in his stall, looked in the direction of the goat and neighed. In response, all the horses returned Jupiter’s call to danger. The goat didn’t like being tied and started to butt the side of the barn, which set off another round of whinnying.

“CJ calm down. I won’t let Roxie get you,” I said patting the horse.

Within minutes Emma and I had the saddles put away, the barn light switched off and the doors closed. We stepped outside and saw Roxy restless, but still tied. I rapidly walked up to the goat, untied the knot and led Roxy away from the barn.

“What shall we do?” asked Emma.

“We’ll have to walk her back to her pasture. She won’t fit in the car. One of us can drive while the other leads the goat, then we’ll switch,” I replied.

“Ok, I’ll lead the goat first,” said Emma taking hold of the purple rope and walking towards the road.

A slight chill filled the afternoon air. Emma walked briskly around the barn and up the road as I pulled the car out of the driveway. When I caught up with her, I drove slowly behind her as she led the goat up the street. Roxy didn’t mind being lead and walked happily beside Emma. Near the intersection of Weaver and Sutliff, we switched and it was my turn to lead the goat. Suddenly, a dog began barking some distance away and Roxy stopped dead in her tracks.

“Don’t worry Roxy. I won’t let the dog get you,” I said pulling on the rope and trying to inch the goat forward.

“Mom, I’ll walk the goat,” said Emma seeing the goat didn’t want to walk for me.

Emma jumped out of the car and took hold of Roxy’s lead rope. The goat liked Emma and began to walk up the hill. I drove up the road and came to a stop near a pull off on Weaver Road, stepped out of the car and started walking back towards Emma and the goat. In the meantime, a big silver pickup truck stopped near Emma.

“Are you taking that goat somewhere?” the woman driving the truck asked Emma.

“I’m trying to get the goat back to her pasture. We were horseback riding and the goat followed us to our barn,’ said Emma.

“I’m the sister-in- law of the goat’s owner. Maybe we can get the goat in the truck bed,” said the woman.

The middle-aged woman stepped out of the truck and walked over to the goat. Emma and the woman each took an end of the goat and tried to lift the animal into the truck bed over the tailgate. They tried a couple of times but Roxy’s weight prevented them from lifting her high enough to get the goat into the truck.

“I’ll park up next to the pasture and meet you there,” said the woman climbing back into the truck and driving away.

The silver truck passed me as I met Emma in the road with the goat. Roxy stared at a brown Standardbred in his pasture near the intersection. The horse took one look at the goat, snorted and kicked up his hooves, spinning away in a mad gallop. Emma pulled on Roxy’s lead rope and we walked a few yards up the hill until the goat’s pasture came into view. Some distance away, the woman with the truck stood near the Slocum fence waiting for the goat.

Emma unclipped the lead rope. Roxy, tired from her long walk, took a few slow steps towards the woman in the road.

“Come on Roxy,” called the woman.

Leisurely, the goat walked away from us towards the woman. Finally, the woman grabbed Roxy’s collar and led the goat away. Glad to at last be rid of the goat, we jumped in our car , turned around and headed towards home.

“Boy, that goat is a handful!” I said as we drove away.

This entry was posted in Uncategorized and tagged goats and horses, horseback riding. Bookmark the permalink.