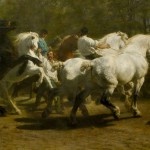 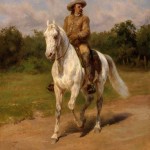 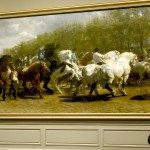 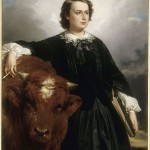 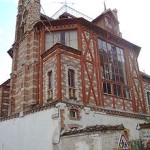 Rain splashed against yellow taxi cabs speeding to make the light on 5th Avenue. The umbrella’s we purchased at CVS on Queen’s Boulevard a few hours previously threatened collapse against a strong wind which roared down the city street. Central Park barricaded behind a tall stone wall gave a brief glimpse of the savage destruction the high wind and rain inflicted on the trees. Tropical Storm Lee unleashed a deluge and rivulets cascaded into the street running through metal grates to the sewer system far below. I thought about Paul McDaid and his cart horse Dream, but was sure that in the storm the carriage drivers had retreated to the stables. Unbeknownst to us, rivers were rising preparing to crest their banks, burst dams and send floodwaters into our neighbors houses back home in the Southern Tier of New York State, but in the city on September 7, 2011 it seemed like an ordinary day except for the downpour.

Emma and I hurried up the massive granite stairs of the Metropolitan Museum of Art, glad to have finally reached our destination. Standing in the Great Hall the noise of the pounding rain ceased as if by magic. We stepped into a long dignified line of museum goers waiting to check their belongings. The coat checker took our jackets, umbrellas and packages handing us ticket numbers; briefly we followed a crowd which quickly dispersed into many different galleries. A long, wide staircase led us to the 2nd floor where the European paintings hung. After wandering from one gallery to the next, we stopped to admire ‘The Horse Fair’ painted by Rosa Bonheur (bau-NUR). It wasn’t the first time I’d seen the painting. Many years ago when I lived in the City, I visited the Met often and always found myself admiring Bonheur’s colossal work of art.

On March 16, 1822, Rosa Bonheur was born into a family of artists; destined to become the most famous female painter of the 19th century. The oldest of four children, Rosa attended an all boys school, but was expelled for being too much of a “tomboy” and disrupting the class. At eleven, her mother died and her father, a landscape and portrait painter, tried to apprentice Rosa to a seamstress but that did not work out so he decided to teach his daughter how to paint.

A unique individual, Rosa loved animals and believed all living creatures possessed a soul. She devoted her life to painting animals and in 1852 began work on ‘The Horse Fair’. She spent a year and a half sketching twice a week at a Paris horse market located on de l’Hoital Boulevard. To facilitate her work at the horse market and to appear less conspicuous, Rosa dressed in men’s attire. Besides dressing in trousers, she smoked cigarettes in public, cut her hair short and rode astride instead of using a side-saddle, all considered unladylike activities for a woman in the 19th century.

Rosa was 31 years old when she completed her famous painting and exhibited the work at the Salon. ‘The Horse Fair’ won her world recognition as well as a gold medal and financial independence. She purchased Chateau de By located in Thomery, France for a home and studio. Rosa had a menagerie which she kept at her home that included lions, gazelle, wild sheep, horses, and a stag. She worked there for forty years painting and welcoming visitors; many famous people crossed her doorstep including Buffalo Bill Cody.

Their friendship began when Cody arrived in France with his Wild West Show to perform at the Universal Exposition of 1889. He made camp on a 30 acre compound for 5 months during which time he granted Rosa free access to the grounds. She painted and sketched Indians, buffaloes, horses and weapons producing approximately 17 paintings. To return the favor, Rosa invited Cody to her studio and painted him wearing a buckskin fringed jacket, riding a white horse. Rosa gave the painting entitled ‘The Buffalo Hunter’ to Cody as a gift which he always treasured.

The museum announced closing in 15 minutes, so we hurried to retrieve our belongings and stepped back into the storm. The rain still pounded the sidewalks, splashing asphalt and cement. A walk down 5th Avenue brought us to the subway and shelter. It wasn’t long before we boarded an Amtrak train and headed north to Albany where our car waited. The last leg of our trip brought us to a highway closure due to flooding and an arduous trip over a winding country road in the dark, but that is another story.

If you make the trip to the City check out the Metropolitan Museum of Art on 5th Avenue. Climb the staircase to the 2nd floor and have a look at Rosa’s painting. Even though ‘The Horse Fair’ was painted a hundred and fifty-seven years ago, the work of art possesses a life of its own.

This entry was posted in Uncategorized and tagged Metropolitan Museum of Art, Rosa Bonheur, The Horse Fair. Bookmark the permalink.