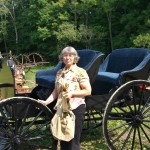 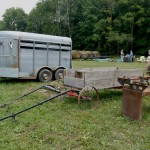 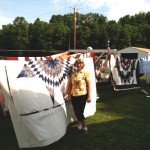 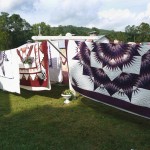 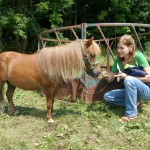 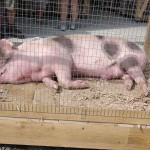 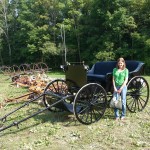 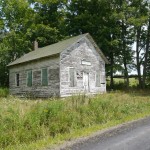 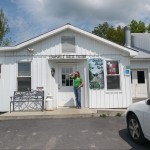 On August 11, I found myself in Karen Sykas’s car headed for the LeRaysville Cheese Factory located far out in the countryside where many Amish farms were situated. She turned the car towards the Athens Bridge, crossed the Susquehanna and followed Cotton Hollow Road which twisted and turned over hills and through woodlands dotted with open fields towards Warren Center, Laceyville and Leraysville. Karen knew the area well having lived for twenty years on a farm near the cheese factory.

The early morning sun hid behind a sheet of warm haze, and as we drove, the haze ascended into the sky forming cumulus clouds surrounded by a rich blue color. We were headed towards several tiny isolated villages which had withstood the march of progress and were hidden by thousands upon thousands of acres. The car traveled further and further out into the countryside where we began to see signs of the Amish. Their farmhouses clung to the gentle rolling hills and their distinctive black buggies were parked near barns.

Karen turned onto Warren Road and after a few miles we came to an Amish farm which was holding an auction. The familiar black buggies with orange caution signs tacked to the back were parked in front of a long metal building. Cars and trucks lined a parking lot near the entrance and a large crowd filled the auction house.

“Want to stop at the auction?” asked Karen.

Karen pulled into the parking area. We climbed out of the car to look around and walked into the auction house, registered and received numbers written in black marker on stiff white paper. An attentive crowd sat on folding chairs watching and waiting for their chance to join in the bidding. The auctioneer’s voice rose and fell in a rhythmic melody as different types of cables and chains were sold.

“How about taking a look at the quilts?” said Karen pointing to a clothesline across the street in the yard of a farmhouse.

A short walk brought us to the lovely quilts hanging in the farmhouse yard. As we examined the handiwork of the Amish quilters a little girl about 5 years old walked between the hanging bedspreads. She came close to have a better look at us. The child’s mother moved quietly after the little girl straightening the quilts on the line as a couple of older girls watched from the back porch.

It wasn’t long before we crossed the street again and circled the building, inspecting a carriage, horse trailer and other large farm implements. We stopped at a small hen house and looked inside. On one side of the coop sat a row of nesting boxes.

“I wish they would let us have chickens in the village,” said Karen.

“That would be nice. Behind our barn there is a large piece of slate where a chicken coop stood, but now the town has an ordinance against owning them,” I said.

“Some towns let you have hens,” said Karen.

“I guess it’s the rooster’s that disturb people by crowing early in the morning,” I said.

Finally, we arrived at the other entrance to the building where a large pig lay sleeping in a cage. The sun beat down on the poor creature and the animal didn’t stir. Directly behind the pig were many wire cages stacked toward the ceiling containing chickens, ducks and rabbits. The Amish were everywhere, babies, little children, adolescences, men and women. The men and boys were all dressed in dark blue pants, light blue shirts, dark suspenders and yellow straw hats, while the women, regardless of age, wore light blue dresses with white aprons and small white caps covering their hair.

Just outside the building, I noticed a mini-horse with a pink auction sticker stuck to his hindquarters standing next to a round bale feeder. About 10 to 15 Amish men formed a circle around the feeder. They stood side by side quietly talking as the tiny horse ate hay.

“Do you think they will mind if we look at the mini-horse?” I asked.

“I don’t think they will care,” replied Karen.

As we neared the round bale feeder and the men, Karen and I realized they were not men but teenagers. The boys didn’t say anything as we petted the mini-horse and took pictures. We were careful not to point our cameras at the teens. After a few minutes, we walked back toward the auction house. Someone had moved the pig to the other side of the building, into the shade, but the auctioneer still hadn’t begun auctioning the quilts.

Karen and I walked further into the building weaving around boxes filled with household items waiting to be auctioned. We found a small opening where we stood, waited and watched. Directly in front of us a group of children stood behind a sewing machine. A very young boy sat on the sewing machine table. He wore a wide brim straw hat and had an angelic face. Before long another small child who looked like his twin came to sit beside him.

The auctioneer turned his attention to the quilts. Each quilt was carefully folded and rested on a long table. The auctioneer paused and waited for a man to clip the quilt onto a long pole suspended by a rope from the ceiling. Once the quilt was secured, the man hoisted the quilt upward until the bedspread completely opened, revealing the intricate pattern. As soon as the quilt hung before the audience the bidding began. The price of each quilt quickly rose into the hundreds and out of our price range. Many dealers won the bidding and would resell the quilts someplace else for more money.

Karen and I left the auction and continued our journey towards the cheese factory. After a few miles, we stopped to take a picture of a small schoolhouse. Maple Grove School, District 7, read the sign above the door. Some of the siding was broken and we could see hay inside the structure. It must have been a long time since any children attended school there.

“I think it must have been an Amish school house,” said Karen.

Karen and I drove a little further until we came to a small white building with the words ‘Leraysville Cheese Factory’ painted in black above the door. The cheese factory was built by a group of Old Order Amish farmers in 1978. The current owners continue the Amish tradition of hand making cheese. We entered into the neat, cozy interior and sampled a few different cheeses. The factory made and sold a wide variety of pasteurized whole milk Cheddars, Swiss, Limburger, Jack and Havarti style cheeses.

After we made our purchases we left the cheese factory and continued our journey to the Country Goose Studio where we met the energetic artist and owner, Sharon Morales. She was busy painting one of her projects. Her studio/shop was filled with unique hand painted motifs which included decorated pots and pans to hand painted furniture and saws. Sharon handed me a packet filled with fliers describing other unique shops in the area; Elmo’s Crafts, Home Textile Tool Museum, Antler Ridge Winery and many more.

Karen turned the car towards home and drove back over the hills and woodlands dotted with fields. We passed Amish farms and non-Amish farms buried within the wilds of the Endless Mountains of Northeastern PA. Our day’s adventure came to a close as we left the country life behind and returned to the populated village. Even so, we know the quieter side of life is but a short drive away.