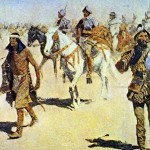 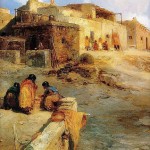 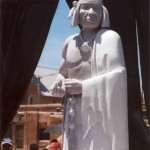 Francisco Vazquez de Coronado began his journey from Compostela Mexico, traveling through SE Arizona, New Mexico, Texas, Oklahoma and Kansas. His quest to find Cibola, the seven cities made of gold, reportedly seen by Friar Marcos de Niza, never materialized. The cities whereabouts fell into myth and legend, while Coronado was forced to return to Mexico empty handed and heavily in debt.

The common belief that the Plains Indians acquired horses from Coronado is in all probability untrue. Coronado’s expedition of 1540-1542 utilized 558 horses; however, only 2 of the horses were mares making it highly improbable that the Indians acquired any breeding stock. Additionally, the Plains Indians had never seen horses before, nor did they know how to handle the animals. Whatever horses he lost were through injury or death.

In all probability, the Indians obtained horses brought into the area by Don Juan de Onate y Salazar (1550-1626), the colonial governor of the New Spain province, New Mexico. To establish his colony Onate brought with him thousands of domesticated animals including hundreds of mares and stallions. The Spanish planned to establish a European style feudal system of peasants and serfs in the New World. On the Spanish ranches in New Mexico, the Pueblo Indians were forced to work as slaves. The colonist tried to prevent the Indians from gaining knowledge of how to handle horses; however, this proved impossible to implement as the Indians inevitably worked with the animals.

As the Indians gained knowledge of horses and horsemanship, the Spanish herds were raided. Indians began to build their own herds. In the mid 1600’s Navajos stole horses from the Spanish and the Apache traded Spanish captives for horses. However, the real windfall for the Indians came under the leadership of Pope when he and several other Pueblo leaders organized the Pueblo Revolt.

Pope sent runners to all the Pueblos. Each runner carried knotted cords which they gave to the leaders in each Pueblo. The knots signified the number of days remaining until the Indians would rise up and attack in unison. Every morning the Indian leader untied a knot, when the last knot was untied the Indians would attack the Spanish. One day before the planned attack two Tesuque Pueblo runners were captured by the Spanish and the colonist learned of the rebellion. Realizing their plans had been discovered, Pope immediately ordered the attack on August 10, 1680, before the Spanish could muster arms and put down the revolt.

The attack began in Taos with the killing of 21 of the province’s 40 Franciscan friars and 380 Spanish settlers. The Indians continued their attack throughout the New Mexican colony; killing settlers and burning their churches and ranches. The Spanish were forced to flee to Santa Fe for safe haven. In the interim Pope’s insurgents surrounded Santa Fe cutting off the city’s water supply. The New Mexico Governor, Antonio de Otermin, and all the settlers were finally forced to retreat from the colony on August 21. They headed for El Paso del Norte in Mexico leaving New Mexico free of Spanish domination.

The Pueblo Indians captured thousands of horses. They managed the herds and some horses were traded to other tribes including the Kiowa and Comanche. By 1745 French traders reported seeing the Cheyenne Indians in Kansas with horses. The horse quickly replaced the dog as beast of burden allowing the Plains Indians greater mobility and speed. Now the stage was set for the horse to become an integral part of the Plains Indian’s way of life.