Farewell to Roxy the Neighborhood Goat 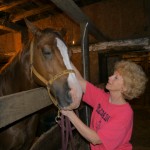 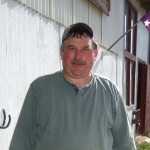 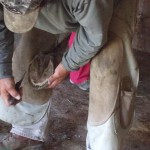 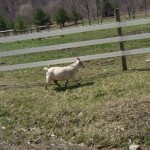 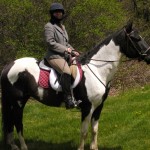 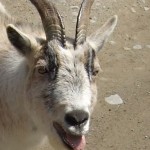 It was just before 9:00, Monday morning, when I pulled my SUV into the parking space beside Donna Horton’s car. A morning fog hung over the mountainside as Socks and Shadow waited in their stalls. Donna stood in Socks’ stall brushing off caked dirt and mud from her horse while several kittens ate breakfast from a huge bowl near the grain barrels. Before long, farrier Kenny Bellis pulled his vehicle into the space just in front of the barn.

Pulling shoes marked the end of riding season and signaled winters approach. Anne would have been there but she had to work unexpectedly and asked me to sub for her. Donna brought Socks out of his stall and Kenny went right to work. The shoes came off quickly. He skillfully filed the hooves, evening the rough edges. Before long it was my turn to get Shadow, bring him out of his stall and hold the horse so the farrier could take off the metal shoes.

“So how has everything been for you Kenny?” I asked.

“Busy, we went to the Congress in Columbus, Ohio for about a week.”

“Yah, it was great. They have all kinds of venders there. Events are going on constantly for weeks. I bought three air pads at a very reasonable price.”

“I heard it’s supposed to be really exciting,” I said as I tapped Shadow on the muzzle for nibbling at my hand.

“Just let him chew on the leather lead. It calms him,” said Donna and Kenny simultaneously. I took their advice and the horse immediately relaxed.

The sun’s warmth infiltrated the barn and the thick fog rose into the sky. Two kittens scampered past Shadow and made their way outside to the log pile. Kenny picked up Shadow’s hoof, pulled the shoe and smoothed the edges with his file.

“You know I was riding the other day and Cassandra stopped her truck to speak to me. She said the goat was getting more and more aggressive and suffered a broken jaw,” said Donna.

“Roxy just doesn’t act like a nanny goat. She’s more like a Billy goat, and that’s probably from a hormonal imbalance of some kind.”

“Lady had something like that once. She would growl and kick the side of her stall. The vet said it might have been tumors on her uterus.”

“Well, Roxy is certainly aggressive with the horses and chasing us,” I said.

“Cassandra said she took Roxy to a goat sanctuary, so no more Roxy. They may remove her bloated utters which might help reduce the aggression,” said Donna.

“I haven’t seen Roxy for weeks and wondered what happened to her. I’m glad the goat found a good home and won’t be chasing us down the street anymore.”

“That goat was a handful,” said Donna.

Kenny finished pulling the shoes and we wished him well. Donna returned Socks to his pasture and I lead Shadow through the barn and released him back to his pasture buddies in the field. I put a halter on Pepper, brought her into the barn, saddled up, and then we rode up Oakfield Drive. I planned to circle around the block past the Slocums, but when I reached Highland Drive a barricade crossed the street with a sign that read ‘Road Closed’. In the distance, I heard heavy earthmoving machinery and decided to take another route back to the barn.

For several days all the sky gave us was rain. On Thursday morning, dark, low hanging clouds threatened more drizzly rain, but by afternoon the clouds departed replaced by clear skies. The afternoon sparkled as orange and red leaves caught the sun’s rays and filled the hills with a radiant glow. I threw my tack in the back of my SUV and drove to the stables, found CJ and saddled up for a ride. I thought, ‘might as well head up past the Slocum’s since Roxy isn’t there anymore.’

I reined CJ towards Weaver Road turned up Bobcat Lane and entered the park. We slipped into the woods. Leaves blanked the trail, covering puddles and concealing mudding patches. Wind from the rainy days denuded some of the trees, but the forest still glowed yellow, orange and red catching the pink in the late afternoon light. The sun vanished over the edge of the mountain, and the woods were quiet except for the gentle fall of the horse’s hooves; nothing stirred, not even the wind.

Since I didn’t have to worry about the goat, I circled back and headed for the barn down Weaver Road towards the Slocum place. When I rode toward their pasture, floating through the twilight came the familiar bleating of a goat, like a distant memory. I glanced across the pasture where a group of horses waited to go into their stalls for the night; just outside the indoor arena. Behind the arena’s gate, I saw a goat pacing back and forth and heard her familiar bleating. I took a deep breath and rode on thinking, ‘Roxy is back!’

4 Responses to Farewell to Roxy the Neighborhood Goat