New Horses at the Stables 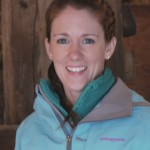 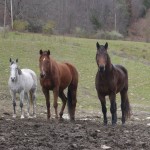 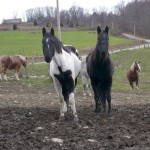 September 13 proved to be a typical, pleasant autumn day. The sun shone and the crisp air filled our lungs as Emma and I drove up to the stables to ride and greet newcomers at the barn. A shiny, aluminum horse trailer in front of the stables told us the new herd members had come. In fact, the horses were already unloaded and standing in their stalls eating hay. I pulled my SUV into the driveway and saw Ashley and her father chatting with Connie. It wasn’t long before we stepped out of the car, joined the group and were introduced to the newest members of Ballentine’s Horse Heaven.

The horses belonged to Ashley and Scott; a young couple looking for a temporary place to stable their animals for winter. Samson, a bay Percheron-Thoroughbred mix 16.3 hands high, belonged to Scott. The horse had suffered a hind leg injury and could no longer compete at horse shows. Formally a lesson horse, the gelding now enjoyed trail rides with his owner. Freya a 6 year old mare, 16 hands high and trained to race at the track, now performed dressage and enjoyed jumping with Ashley.

“I’m training CJ to jump with the help of Karen Sykas. She has experience with show jumping, so we’re beginning with Cavelletti exercises. I’m thinking of getting boots for his legs so he won’t get hurt,” I said.

“You’d be better off with splint boots they’re better for jumping. You can borrow mine if you want to try them out,” said Ashley.

“Ok thanks. We’re going to bring in CJ and Pepper and saddle up,” I said wishing the newcomers well.

“Good luck with that,” said Ashley as she gathered her things and left with her father.

We led the two horses through the barn and passed Samson’s stall. Freya’s stall bordered Pepper’s and was across the aisle from CJ. Right away I knew there was trouble. As soon as CJ was released into his stall he raised his head, circled nervously and whined. Pepper felt she had to protect her grain bucket, even though there wasn’t any grain in it. She laid back her ears, squealed and immediately turned her rump towards Freya threatening a kick. Freya snored; half reared and headed for her stall gate setting herself up for a jump to freedom. Emma and I stood in the aisle between stalls watching and waiting for the horses to settle down.

“Emma, be careful she’s going to jump!” I picked up a crop and ran over to the stall gate preventing Freya’s exit. Samson and Freya kept whining to each other and Freya circled her stall. Again the large horse set herself up for a massive leap over the gate. I looked outside the open barn door and saw Johnn near the woodpile. “Emma run and tell Johnn that Freya’s going to jump out of her stall!”

Johnn came in and Freya settled down. Before long Connie arrived to protect the gate. Johnn went to find a stall guard to fit above the gate which would block the horse’s attempts to jump out of her stall. In the meantime, CJ and Pepper were both nervous; whining and circling their stalls.

“Let’s try saddling up Pepper outside and then we’ll come back for CJ,” I said.

We led Pepper quickly past Freya and tried to tie her to a hitching ring on the side of the barn. Pepper kept moving, fidgeting and whining making it impossible to saddle her.

“Ok, let’s give her some distance from the other horses. We’ll take her to the arena and saddle her,” I said.

Pepper settled down once she entered the arena and was able to eat some grass. Emma saddled the horse and I asked, “How about we just work on Cavelletti with Pepper?”

“I’ll run back to the barn and put CJ out to pasture,” I said leaving the arena and hurrying back down the road to the barn.

Connie had troubles of her own. Freya repeatedly tried to jump out of her stall; in fact she reared high enough for her front legs to come over the stall gate. Luckily, the horse was still in her stall. I grabbed a brush and entered CJ’s stall in an attempt to calm him down. After passing the brush over him to get his attention, I opened the stall gate and quickly led the horse past Freya. It wasn’t long before CJ stood in the pasture with the other horses.

Emma and Pepper practiced taking a small jump at the end of a series of poles. Before long it was time to unsaddle Pepper. This time we didn’t make the mistake of bringing her into the barn with the new horses. Instead, Emma took off her saddle in front of the barn. She quickly walked Pepper past Samson to the barn door and released her into the pasture. In the meantime, Johnn had moved Freya closer to Samson and put up a stall guard.

A couple of days later, I came up to ride expecting to see some dramatic action in the pasture. Horses chasing each other, kicking and biting.

“How are the new horse doing?” I asked.

I gathered Pepper’s lead rope and halter and headed out to the pasture where everything was quiet. Freya and Samson were tighter than fleas on the backside of a dog as they stood eating grass. The other horses weren’t far from them and they too ate grass. I walked up to Pepper, put on her halter and walked out of the pasture thinking ‘boy that was easy, nothing like when Sam came.’