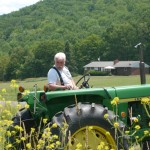 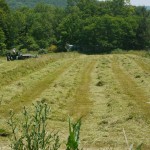 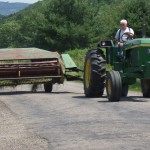 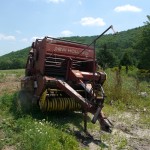 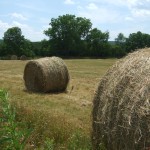 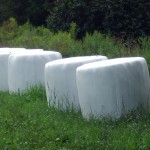 Baling hay seems straight forward – cut it, bale it and put it in the barn, but like everything details matter. Johnn has been baling hay at Horse Heaven since 1985, before that he helped on his family’s farm until he turned 18 and went into the world to other jobs. He knows a lot about farming and hay. On a beautiful summer morning in July, Johnn sat behind his desk in his office. We spoke about cows, horses and the process of baling hay.

The haying season in Northeastern Pennsylvania runs from June through August. Timothy, Clover and Alfalfa are the predominant components of hay. The field is ready to cut when the grass is in full seed or the clover is in full bloom. This is the point when the grasses are filled with the most nutrients.

When the grass is tall, standing in the field and ready to be mowed, Johnn pulls out his tractor and hitches up the haybine. The haybine has rubber rollers with intermittent matching tread that crushes and breaks up plant stems; this helps eliminate moister in the grass. The haybine cuts a 9 foot 6 inch swath that comes out of the machine in 5 foot windrows. The windrows are comprised of freshly cut grasses neatly piled in long rows. The freshly cut hay is now ready to dry for a few days depending on the weather. Weather is a critical part of the scenario, since rain can damage the hay causing it to mold.

After the hay is cut, Johnn attaches his hay tedder to the tractor. The hay tedder throws swaths of hay across the field, fluffing it up and eliminating moisture, allowing the hay to dry out faster than if it merely sat in the windrows. A day or so later, the hay is ready to rake, which puts it back into neat windrows. Once raked, the baler is attached to the tractor and Johnn runs down each windrow producing big, round bales of hay. Each bale is 5.5 feet by 5 feet and weighs approximately 850 pounds when first cut; after the bale dries it weighs about 400 pounds.The bales are left in the field until they are dry, otherwise, the heat of the drying hay in the barn could spontaneously ignite and cause a fire. Some farmers leave the round bales in the field and don’t store them in a shelter. Johnn always stores the bales in the barn and opens one when he needs hay to feed the horses.

“The weather plays an important part in baling hay, if the grasses are too wet and have too much moisture when baled, the hay will mold. That’s why after the hay is mowed you have to let it dry out for a day or so before you bale,” said Johnn.

“You can’t feed hay with mold to horses?” I asked.

“No, horses have a single stomach and can’t digest hay with mold or other toxins,” he replied. “It can make a horse sick, colic and die.”

“It is white, as white as this cup,” he said tapping his coffee mug. “Now cows are different. Cows have a four chambered stomach and can break down rougher hay. They are more tolerant to mold.”

“I notice that some farmers leave their round bales in the fields and don’t store them in a barn or shelter,” I said.

“Some do. Those bales are probably meant to be fed to cows. If you leave the bales long enough in the field mold will form on the bottom where the bale touches the ground. Horses need better quality hay, free from mold,” replied Johnn.

“I’ve also notice round bales wrapped with white plastic. Is that a method of storing hay to protect it from molding?” I asked.

“Silage usually comes from a silo. In the silo you put corn, sometimes chopped grass and let it sit until it ferments and forms silage. The silage looks thick and brown and stinks awful. The cows love it. Silage increases milk production, but silage isn’t any good for horses. So in those white wrapped bales the farmer is making silage the same as he would in a silo,” said Johnn.

The nutrients found in hay are important to the health and wellbeing of the horses. Johnn keeps a close eye on it’s quality. The hay will feed them over the long, barren winter. In past years, he has thrown out hay because it was moldy and not fit for horses to eat. One problem with moldy hay is that mold spores can quickly spread to other bales contaminating them as well. The extreme cold in this region of Pennsylvania makes it important to plan ahead. The first day of fall comes a few days from now and after that wintry weather will begin.