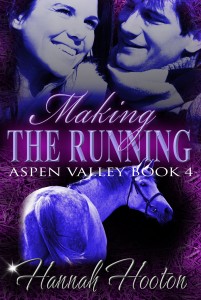 I recently read Hannah Hooton’s newly released novel, ‘Making the Running’, the fourth book in the Aspen Valley Series. Although the novel may be described as adult, romance fiction involving horses and racing, this book is a bit more. Hooton’s characters, and their intertwining family relationships, wrestle with the psychological motivations which draw people together or push them apart.

The novel revolves around Kate; a groom and exercise girl working at Aspen Valley Racing Stables for trainer Jack Carmichael. Her deep attachment to the horse she cares for, d’Artagnan, at times overshadows her romance with two brothers, Ben and Nicholas. Kate finds herself involved with circumstances beyond her control and forced to make decisions which have long term consequences.

The racing and horse scenes are well written and illustrate Hooton’s firsthand knowledge of the events. The author’s familiarity with racing allows the reader an inside look at how races can be manipulated. In addition, ‘Making the Running’ delves deeply into broken family relationships, addiction, poverty, status and ultimately the universal battle between responsibility to one’s self verses family. The characters are very well developed and believable; exactly what one would expect in a Hooton novel.

After finishing the last chapter, I put down the book but the characters remained with me. As it is with novels that open up a fictional world which seem so real; I was left with the gnawing question “I wonder what these people are up to now?”

I highly recommend Hannah Hooton’s novel, ‘Making the Running’, to those who love horses, romance and psychological intrigue. The novel is a digital book and can be found at the following links:

*Note: The first novel, “Keeping the Peace”, in the Aspen Valley series is free on Hannah’s website, Hannah Hooton’s Website listed under Books.