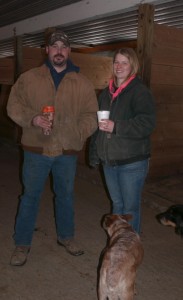 My SUV twisted around tight turns on the gravel road. I slowed the vehicle since frozen earth, coated with a thin layer of ice and dusted with snow, created hazardous conditions. The temperature hovered around 27 degrees; the windchill factor made the air feel more like 14. Early morning light filtered through grey clouds which occasionally released fresh snowflakes; tiny dry crystals that hung in the air, softly blown skyward towards the clouds which spawned them. Before long, I pulled my vehicle to a stop at my destination, Rising Hope Farm.

Horse trailers and trucks lined the driveway. I couldn’t see anyone but in the barn it was a different story. The Equine Wellness Clinic was underway with horse providers stationed along the central aisle; each manning their post next to a box stall. There is something about Rising Hope Farm which exudes safety, order, horse sense, and good planning. The Clinic was no acceptance to this rule; even though the barn was full of people, horses and providers, a claim, cool and collectiveness ordered of the day. 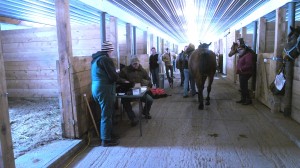 Dawn and Kenny were drinking coffee when I turned to Dawn and asked,” Why did you organize the clinic?”

“Another stable sponsored a clinic and I thought it was a great idea. So, I contacted the equine providers and set the date. People spread the word. We have approximately 25 people in attendance and plan to have the clinic next year too.”

The one day clinic provided horse owners a wide variety of services; spring vaccinations, lameness exams, x-rays, ultra sounds, chiropractor, dental work, hooves trimmed or shod and massage therapy. Instead of scheduling each equine provider individually, horse owners had access to all services at one location saving time and money. 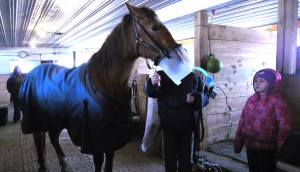 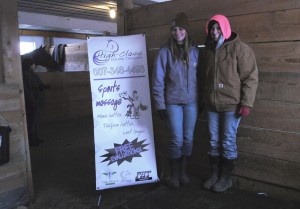 Wildfire, Lou Anne Miller’s horse, stood quietly in the center aisle as Darian Coykendall of High Class Equine Therapy administer a breathing treatment. The horse had suffered from breathing problems for several years and Lou Anne hoped the treatment would help. The nebulizer was filled with Equisilver Vet Antimicrobial Silver, a natural solution which aids respiration.

Darian performs massage for horses and dogs. One aid she uses in her work is called a Theraplate. The machine, a raised massage platform which fibrates at various speeds, provides therapeutic treatment to a horse’s hooves and legs. The machine functions as a sort of foot massage for horses. We stood on the Theraplate and Darian turned it on. A pleasant tingling sensation moved through my feet to my legs. 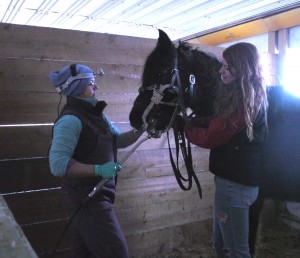 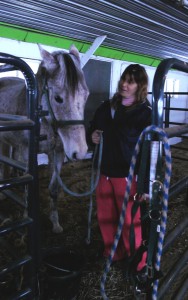 I walked further into the barn and met Anne Shaffer standing in a stall with Shadow. During the past summer, Shadow had cut his knee open. The cut healed leaving a protruding bump. Before Anne began riding season, she wanted the knee x-rayed by a vet at the clinic to make sure that it was okay.

The two vets at the clinic, Maral Avetian and Megan Tiffany, attended veterinarian school together at Penn State. They have been practicing since 2012. 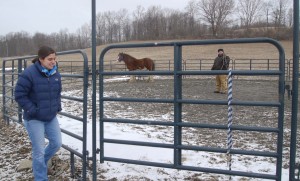 Maral x-rayed Shadow’s leg and found nothing wrong. She moved on to Sam Lantz’s horse Clyde. Several months ago, Clyde suffered an injury while barrel racing and had been lame ever since. Sam took his horse outside to the round-pen so Maral could watch how the horse moved. 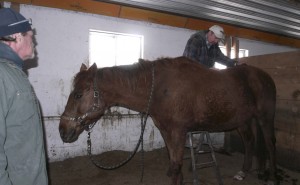 I walked back into the barn and down the central aisle to a stall where chiropractor, Rob Wright, stood on a stepstool. He carefully aligned the bones in the horse’s back. Ron has worked as a chiropractor for the last ten years and learned his trade from his father. He works on approximately 600 horses a year. His advice to horse owners, ‘when something gets out of alignment have the chiropractor fix it right away. The longer you wait the greater the strain on the entire body besides being harder to fix’.

Kenny Bellis worked on a horse in the next stall. He was busy filing down and trimming the horse’s hooves. I looked down the central aisle and watched the people and horses for a moment, then said my farewells and walked outside.

I climbed back into my SUV and turned towards home. The wind had picked up. Snowflakes danced in the sky as if they were afraid of the frozen earth below. As I drove the lonely road, I thought to myself that the clinic was a fantastic idea which materialized into a well-organized event. Dawn Bellis, skilled horsewoman, deserves accolades for organizing and providing a place to host the clinic. Truly, a service to the community.