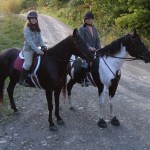 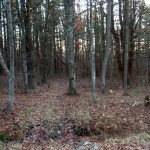 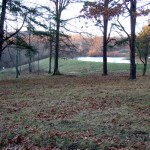 Why would a horse, a fairly intelligent animal, want to carry a person around to places consider dangerous in his eyes? Probably not, however, after some persuasion that is just what horses do for us. If you think about it that is pretty amazing. Some big time horse trainers teach a horse to carry a rider in a day. I’m not a horse trainer, but I have worked with several green broke horses. The one thing I have learned is; don’t push the horse beyond his capability. He’ll get there – it just takes time, time in the saddle and time on the trail.

CJ started his “basic training” with Anne Shaffer in the spring of 2007. He learned about saddles, bridles, and how to carry the first rider ever on his back. Then he had a long rest of about 2 years in the pasture, nobody wanted to ride him so he waited. I came along in February of 2010 in the middle of the winter, gathered him up, put the saddle on him, took him back to the round pen and began anew. There were bumps in the road, and when problems arose I asked more experienced people for advice. CJ progressed through the hard spots and we rode on.

The one overarching characteristic CJ possessed was his great curiosity. When I first started riding him in the round pen and arena, he seemed to enjoy going out of the pasture. Perhaps boredom sparked his curiosity or he just wanted to eat the grass on the other side of the fence. Gradually, I went from riding him in the round pen, to riding around the arena, to joining my friends and the other horses on trail rides through the park. CJ dutifully walked behind Pepper, Sam, Jupiter, Shadow or Socks especially when something made him nervous. Occasionally, he became brave and pulled ahead of the other horse leading the way.

Once or twice last winter, I tried riding CJ alone. He walked slowly, head held high apprehensive, mystified and questioning everything he saw. The countryside appeared new to him, he felt alone and unsure. Since his birth CJ’s entire universe encompassed the pasture and barn. Suddenly, a new world opened up for the horse. He doubted and hesitated; the horse froze in the road like a living statue, taking it all in. Perhaps if he stood motionless the boogieman wouldn’t eat him. Nevertheless, I really needed him to move forward. Sitting on a horse in the road wasn’t my idea of a ride in the park, so I gently urged him onward. Again, he stopped, and then slowly walked on only to halt several yards down the road. CJ just wasn’t ready to travel without the other horses; so I stopped riding him alone. Someday he would show me he was ready.

This summer riding with other horses, CJ gradually developed more and more confident. When Emma and I came to the stables on afternoons, opened the barn door and called for the horses, CJ came running through the pasture with Pepper following. All we had to do was open the entranceway and the two horses walked in and found their stalls. Now when we rode, CJ pulled ahead of Pepper boldly taking the lead, not stopping, hesitating or pulling back behind her as he had done a few months before. I watched him in the pasture a few weeks ago as he stood grazing by himself. CJ had gained a new self-assurance and independence he didn’t have before.

The time had come to try riding CJ alone. Winter provides a good backdrop for new steps in training. The horse seems calmer, people hide indoors, no four wheelers screech through the woods and down the road. The hunters have put up their guns. Few people are going places. The park is dead quiet, the bears are sleeping, even the deer have disappeared, the turkey vultures have gone off somewhere and not a living thing stirs. There are no leaves rustling through branches blocking the view. The woods are naked, open and everything easily seen. The quiet and peaceful afternoon blends softly into night.

The only thing I had to worry about was the school bus. The school bus came around 4:00 like a behemoth juggernaut, rolling down the dirt roads leaving only a narrow space for horse and rider to pass. I planned my outing between 3:30 and 5. Luckily, I didn’t have to watch out for the bus because the kids were on Christmas vacation.

So CJ and I were ready. I called for the horse at 3:30, brushed him down, saddled up, stepped outside, and mounted. CJ walked briskly away from the barn not wavering or giving a backward glance. Up the road we trotted, around the bend and toward the park. The sun made its descent toward the mountain tops, but we had time before total darkness fell.

December’s weather, unusually mild served up many days in the low 40’s, yet the inevitable happened by 5:00; night fell hard and thick as molasses. A soft yellowish-gray haze emanated from the sky above as the mellifluous echo of the horse’s hooves tapped on the soft dirt. The road led to a trail which CJ easily turned onto as we climbed the steep rocky path. I took a shortcut through the open woods where the route became deep with mud and water, then the horse twisted through the winding bridle path and we popped out of the forest near the pond. The winter sun nipped the mountain tops as CJ and I circled back toward the barn; night approached. The horse settled into his stall, darkness fell outside, and the light in the barn felt comforting.

A few days later I rode CJ again, traveling in the opposite direction toward the Slocum place. The Slocum horses stood alert watching our progress near their pasture, and then suddenly took off, a herd running with tails held high. The street led through a small wood, and a little way further intersected with Bobcat Road. The horse walked up the park entrance, not too far just to the front gate. CJ didn’t freeze or stop. He knew the place, he’d been there before. Night threatened to come early so we turned and walked back to the barn, hay, warmth and home. It all seemed so easy, so natural now that the horse was ready to ride alone.